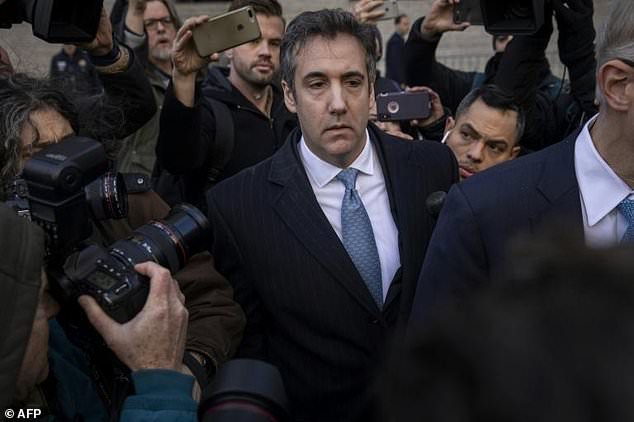 As Democrats decried the plea as evidence that Trump’s associates were willing to lie about his business dealings, Trump sought to deflect mounting political pressure in an incoming House of Representatives under Democrat control by accusing Cohen of lying to get a reduced sentence.

The 52-year-old Cohen, who once famously said he would take a bullet for the Republican billionaire, admitted one count of making false statements relating to an already known prospective real-estate deal in court.

He exited the federal court in Manhattan, ignoring questions from reporters and got wordlessly into the back of a vehicle before being driven away.

The Trump Tower deal – which never got off the ground – has been a focus of an investigation into whether the Trump campaign conspired with Russian operatives during the 2016 campaign, <i>The New York Times</i> reported.

Cohen admitted to making “false, fictitious and fraudulent” written testimony to Congress in August 2017 in connection with the project.

He lied to suggest that the project was shelved in January 2016 – before the first caucus and primary voting began in the presidential election – to downplay links between the deal and unnamed associates and in the hope of limiting the Russia investigation, according to court documents.

Contrary to his original testimony, the project was discussed multiple times within the company – beyond January 2016 – and with efforts to obtain Russian governmental approval being discussed as late as June of that year.

Cohen also mulled travelling to Russia in connection with the project and in May 2016 was offered a possible introduction to either the Russian president or prime minister on the sidelines of a Russian forum in June 2016.

Trump ultimately secured the Republican nomination for president just weeks later in July 2016. On Thursday, the president branded Cohen a “weak person” and emphasised that the property deal was ultimately dropped.

“He is lying about a project that everybody knew about,“ Trump told reporters at the White House before jetting off to the G20 summit in Argentina.

He scrapped a planned meeting in Buenos Aires with Russian President Vladimir Putin, citing Moscow’s detention of a group of Ukrainian sailors.

Cohen’s chief lawyer Lanny Davis leapt to his client’s defence, saying he had “told the truth and nothing but the truth.”

“Michael will continue to work with the SC (Special Counsel) and others until the full truth is told,“ he tweeted.

“Mr Cohen has cooperated, Mr Cohen will continue to cooperate. Sentencing is set for Dec 12,“ said Guy Petrillo, another of Cohen’s lawyers.

Cohen began talking to investigators working for Special Counsel Robert Mueller, whose probe has been a thorn in Trump’s side, after pleading guilty in August to bank fraud and campaign finance violations in New York.

Mueller is investigating whether the Trump election campaign in 2016 colluded with Russian efforts to damage his opponent, Hillary Clinton, and whether Trump has sought to illegally obstruct the investigation.

In Washington, Democratic lawmakers pounced on Cohen’s latest plea to call for the Mueller probe to be allowed to run its course unimpeded.

“Mueller’s investigation must continue – free from political interference by the president – until the truth is out,“ said Mark Warner, vice chairman of the Senate Intelligence Committee.

“Congress should pass legislation immediately to make sure that happens.”

Adam Schiff, the ranking member of the House Intelligence Committee, said there was a “counterintelligence imperative” for its members, in the new Congress, to continue to probe the Trump Organisation’s financial links to Russia.

Once known as Trump’s “pit bull” and right-hand man, Cohen was privy to multi-million-dollar deals and payments to two alleged lovers – whose claims could have potentially sabotaged his boss’s 2016 election.

Hanging Trump out to dry, Cohen testified under oath in court that the president had directed him to break campaign finance law, while pleading guilty to bank and tax fraud. — AFP