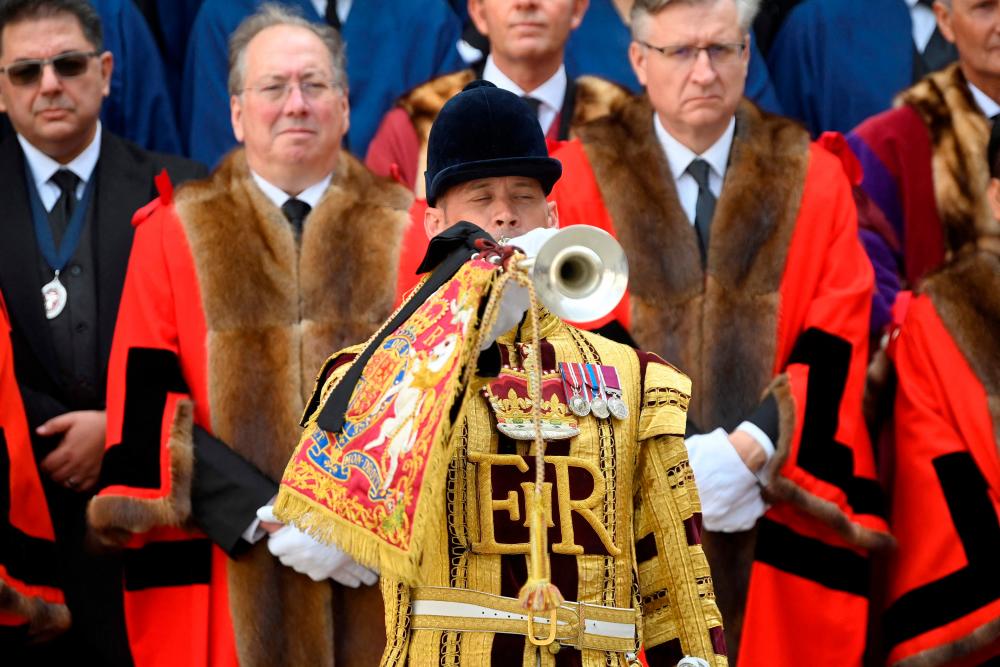 The City Proclamation of Britain’s new King, King Charles III takes place at the Royal Exchange in the City of London on September 10, 2022. AFPPIX

LONDON: Trumpets, cannon fire and cries of “God save the King” rang out on Saturday as Charles III was proclaimed king in a ceremony with roots dating back to Anglo-Saxon times.

The historic ritual at St James's Palace in London is the first real taste of the days of pageantry to come as the country mourns Queen Elizabeth II and comes to terms with a new monarch.

The Accession Council where Charles, 73, took his oath was also televised for the first time, allowing the world to peer behind the curtain on a moment that has never been seen publicly before.

A public proclamation and a fanfare of eight trumpets followed from the palace balcony, a blast from times past when it would have broken the news to a new king's subjects.

Thousands of well-wishers gathered outside the brick-walled palace for the 2022 version of the ceremony, applauding after the formal announcement that Charles is king.

While Charles automatically became monarch after Elizabeth died on Thursday aged 96, the pomp-filled ceremony puts the constitutional seal on his succession before his eventual coronation.

“It’s a moment in history,“ said Kelly Maynard, a 48-year-old from Australia, one of the countries that, like Britain, counts Charles III as its new head of state.

The roots of the Accession Council lie in Anglo-Saxon councils more than 1,000 years ago which picked the monarch from among eligible royal males, according to research published by the British parliament.

But its modern form dates from the accession of King James I in 1603. James ruled the then-separate kingdom of Scotland, meaning his rise to the English throne after the death of Elizabeth I had to be proclaimed in London in his absence.

In accordance with tradition, Charles was not present for the first part of the ceremony, which began at the stroke of 10:00 am (0900 GMT).

Representatives from the 14 countries where the queen is head of state apart from Britain -- the “Commonwealth Realms” including Australia, New Zealand and Canada -- were also invited.

The clerk of the council announced that “Prince Charles Philip Arthur George is now, by the death of our lady sovereign of happy memory, become our King Charles III... God save the king!”

Charles then joined them for the second part in the palace's crimson-and-gilt throne room, during which he took the royal oath.

He hailed his mother’s “example of lifelong love and of selfless service” during a reign spanning seven decades from just after World War II, and said he was “deeply aware” of the “heavy responsibility of sovereignty”.

In a poignant piece of symbolism, a red throne inscribed with his mother’s cypher “EIIR” (Elizabeth II Regina) stood empty behind him as he spoke.

The pageantry then soared to new heights, as trumpeters decked out in red, blue and gold outfits unleashed a fanfare from the brick balcony overlooking Friar's Court at St James's Palace.

Immediately afterwards, David White, a bicorn-wearing official known as Garter King of Arms, read out the proclamation from a huge sheet of paper announcing Charles' accession.

He called out “God save the King” and the newly worded national anthem was played.

It was followed by a rousing three cheers for the new king, with White crying “hip hip” and red-jacketed Coldstream Guards soldiers raising their distinctive bearskin hats and responding “hooray”.

Ceremonial gun salutes erupted at the same time across the country and the proclamation was read simultaneously in Scotland, Northern Ireland and Wales.

Flags were flown at full mast until one hour after those proclamations to mark the change of sovereign, before returning to half mast in mourning for the queen.

“This is the most monumental moment in modern history that we have the privilege to be part of,“ said Samantha Carnear, a 35-year-old from Miami on holiday in London, carrying her young daughter in her arms. - AFP