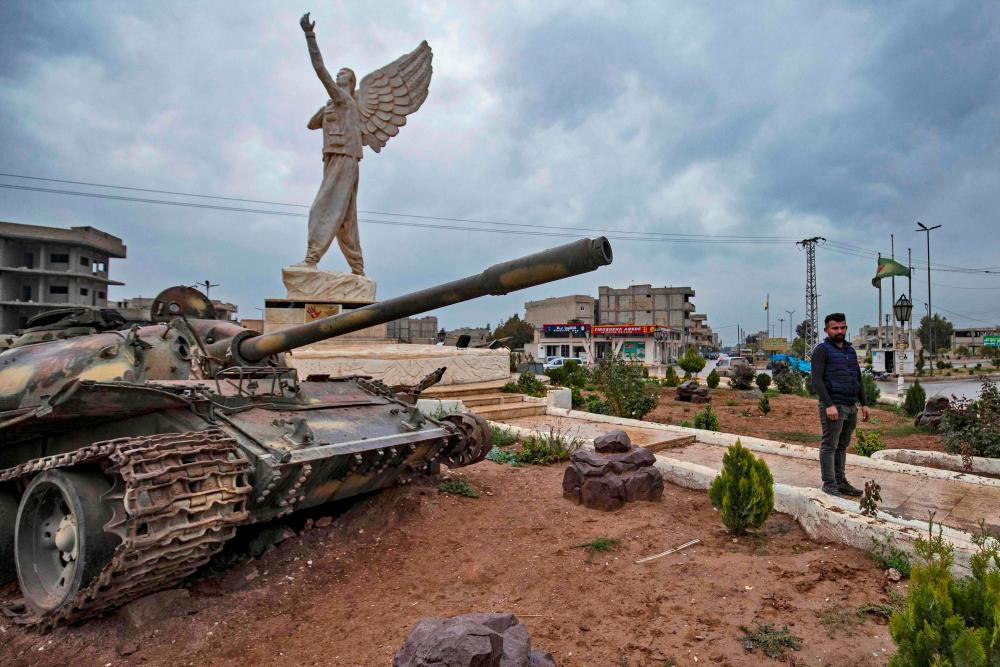 A picture shows a view of the “Free Woman” square in the Kurdish majority northern Syrian city of Kobane, on November 24, 2022. AFPPIX

KOBANE: In the Syrian Kurdish city of Kobane, gripped by fear of a Turkish offensive, Saleh Abdo Khalil passes an open-air “museum” of buildings reduced to rubble.

“Daesh destroyed these buildings,“ the local baker said, using an acronym for Islamic State (IS) group jihadists who previously terrorised this region.

That danger has passed, but now, he says: “Turkey wants to destroy the rest of the city.”

Since Sunday, Turkey has carried out air strikes against the semi-autonomous Kurdish zones in north and northeastern Syria, and across the border in Iraq.

Those raids, which started in Kobane, have killed 58 Kurdish fighters and Syrian soldiers as well as a Kurdish journalist, the Syrian Observatory for Human Rights said.

Ankara has threatened a ground offensive and made clear that Kobane, also known as Ayn al-Arab, would be a primary objective.

US-supported Syrian Democratic Forces (SDF), now the Kurds' de facto army in the area, led the battle that dislodged IS fighters from the last scraps of their Syrian territory in 2019.

Years before, in 2015, Kurdish forces drove the jihadists from Kobane, on the border with Turkey, and the city became a symbol of their victory against IS.

To keep the memories of the combat alive, Kurdish authorities erected a cordon around a group of destroyed buildings, burnt-out vehicles and missile remnants, dubbing the area the Kobane “museum”.

While the football World Cup in Qatar has captured some residents' attention, tension can be read on their faces.

Most fled the combat with IS before slowly returning and rebuilding.

“We fought IS for the whole world, and today the world closes its eyes and acts like an ostrich while Turkey bombs,“ said the baker Khalil, 42.

One week after a bombing in Istanbul on November 13 that killed six people and wounded 81, Ankara said it launched air strikes from “70 planes and drones” against Kurdish bases in Iraq and Syria, starting with Kobane.

Turkey blamed the Istanbul bombing on the Kurdistan Workers' Party (PKK) -- designated a terrorist group by the European Union and the United States -- and said it was ordered from Kobane.

The PKK has waged an insurgency against the Turkish state since 1984, and Turkey alleges that Syrian Kurdish fighters are the group's allies.

Kurdish groups denied any involvement in the Ankara blast.

Turkey then hit other areas including the SDF bastion of Hasakeh province, in the northeast, and President Recep Tayyip Erdogan vowed Tuesday that Turkey would “soon” begin a ground operation.

“The situation in Kobane is bad. People don’t sleep at night” out of fear that the city could be “bombed at any moment”, said Nabo Jumaa Ramadan, who opened a minimart in Kobane after he returned from Lebanon in 2019.

“Kobane is a symbol for the Kurds and she defeated IS,“ Ramadan said with pride.

Erdogan wants to “break the will of Kurds in the city,“ according to Ramadan.

“If Kobane falls, all Rojava will fall,“ he predicted, using the name Kurds in Syria give to the area they administer.

'Under the bombs again'

The Kurds faced an earlier Turkish incursion in 2019 when Ankara's forces and its Syrian proxies grabbed a swathe of land along the frontier.

Under a deal between Moscow and Ankara, Kurdish forces which controlled nearly a third of Syria had to pull back to a line 30 kilometres (19 miles) from the border.

On Thursday despite fears of a new ground incursion, there was no visible Kurdish military mobilisation in the streets of Kobane, AFP correspondents said.

A civilian vehicle traversed the city-centre, calling residents through a loudspeaker to join a demonstration against Turkey's strikes.

Even when bombs aren't falling, Turkey's proximity is hard to avoid, and its flags can be seen along the border from several districts of Kobane.

Flags of Syria and Russia -- a major ally of Damascus -- are also visible, on a nearby hill with a post for government troops.

“We’re afraid of bombs. We are poor, without possessions or land,“ said Amina Youssef, 65, in front of her home.

“We only have this house. What does Turkey want? We don’t know what to do.”

“We came back years ago and began to rebuild our homes,“ Sherwan Hami, 39, said, sheltering from rain inside a shop.

“The city and the markets prospered and people went back to work,“ he said. “But there’s a new war. We’re living under the bombs again.” - AFP