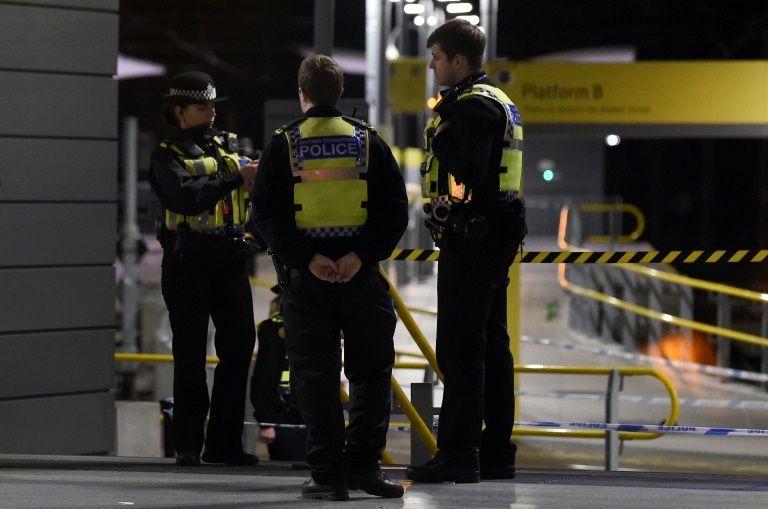 Manchester police are conducting a formal ‘terrorist investigation’ into a stabbing at the city’s main railway station on Monday. — AFP

London: British police said Wednesday it was increasingly likely that a man who stabbed three people on New Year’s Eve in Manchester while reportedly shouting “Allah” had acted alone.

A 25-year-old man whose identity has not been released was arrested on suspicion of attempted murder and is being held under Britain’s mental health law.

He reportedly shouted “Allah” and “long live the Caliphate” before being wrestled to the ground.

“The investigation has moved at a very fast pace and detectives are increasingly confident that the man acted alone in the final stages of the attack,“ the Manchester police department said in a statement.

“The investigation will continue and will examine if anybody may have encouraged or assisted the man to commit the attack.”

Police said investigators are nonetheless studying the man’s possible links to a suicide bombing that killed 22 people during a Manchester Arena concert by the US singer Ariana Grande in May 2017.

The perpetrator of that attack was Alman Abedi, a 22-year-old born and raised in Manchester.

Police said an officer who was stabbed on Monday has been released from hospital.

A middle-aged couple who suffered injuries that were not life-threatening are expected to follow suit in the coming days.

“In their efforts to detain the suspect, one of our officers suffered a stab injury to his shoulder,“ British Transport Police chief constable Paul Crowther told Sky News.

“I have met with the officer today, along with his colleagues, and I am both humbled and full of admiration at their tenacity and dedication.”

The suspect’s family issued a statement through the police expressing “thoughts and prayers” for the injured and gratitude to the police.

“We are acutely aware that many, including within the media, may well have many questions to ask us,“ the statement said.

“However, we have been informed by the (police) that there is an active ongoing, terrorist investigation and as such we are limited in what we can say at this stage.” — AFP