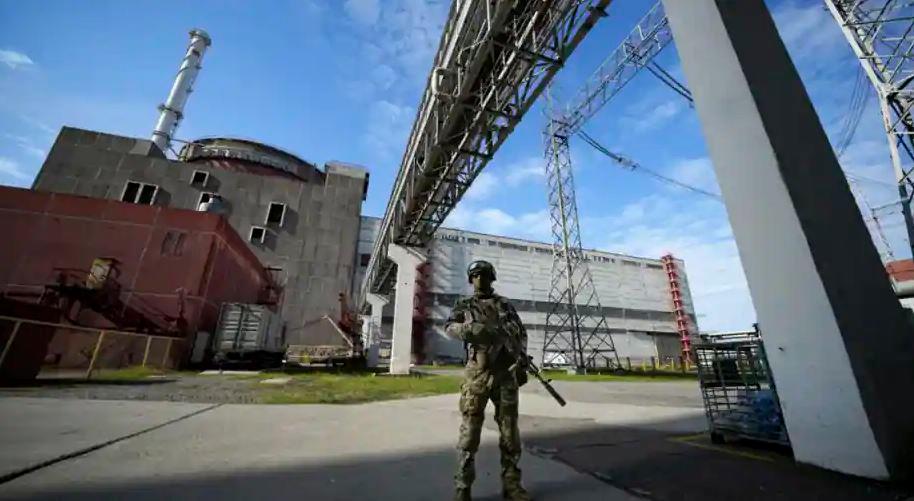 A Russian serviceman guards in an area of the Zaporizhzhia Nuclear Power Station in territory under Russian military control, southeastern Ukraine - AFPPIX

KYIV: Ukraine’s embattled Zaporizhzhia nuclear power plant’s last working reactor has been switched off from the grid after the facility was disconnected from its last remaining power line due to shelling, Ukraine’s power plants operator said Monday.

The Zaporizhzhia nuclear plant -- Europe’s largest nuclear facility -- has been shelled in recent weeks, with Kyiv and Moscow blaming each other for the attacks, raising concerns of a possible incident.

“Power unit (reactor) No. 6 was shut down and disconnected from the grid” because of a fire that was “triggered because of shelling,“ Energoatom state-run company said in its statement on Monday.

“The world is once again on the brink of a nuclear disaster. The de-occupation of the ZNPP and the creation of a demilitarised zone around it is the only way to ensure nuclear safety,“ Ukraine’s energy minister German Galuschenko said following the news on Monday.

This was the last working reactor out of six, after shelling disconnected reactor no.5 on Saturday, according to a statement from the International Atomic Energy Agency (IAEA).

Last week, a 14-strong team from the IAEA visited Zaporizhzhia, with the UN nuclear watchdog’s chief Rafael Grossi saying the site had been damaged in fighting.

Grossi and part of his team left the facility on Thursday, but several members of the mission stayed at the facility to conduct more in-depth analysis.

Out of the six experts that stayed in the facility, four left on Monday and the remaining two are expected to remain in the power plant “on a permanent basis,“ according to an Energoatom statement from Monday.

Ukraine was the scene of the world’s worst nuclear disaster in 1986, when a reactor at the northern Chernobyl plant exploded and spewed radiation into the atmosphere. - AFP