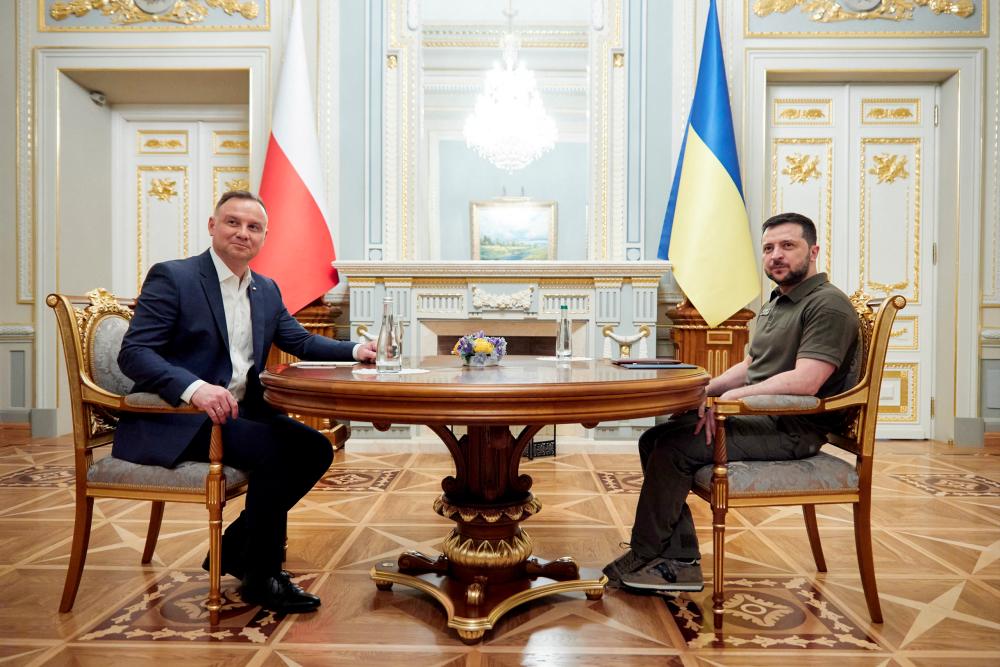 UKRAINE and Poland agreed on Sunday to establish a joint border customs control and work on a shared railway company to ease the movement of people and increase Ukraine’s export potential.

Ukrainian President Volodymyr Zelenskiy and Polish President Andrzej Duda touted the increased cooperation between the countries during a meeting in Kyiv on Sunday, with Duda offering Warsaw’s backing for the embattled neighbour.

“The Polish-Ukrainian border should unite not divide,“ Duda told lawmakers as he became the first foreign leader to give a speech in person to the Ukrainian parliament since Russia’s Feb. 24 invasion.

“This will significantly speed up border procedures,“ Zelenskiy said in his nightly video address, after Duda’s visit.

Most Ukrainian refugees fleeing the war, have crossed to the European Union through border points in Poland, Slovakia, Hungary and Romania. Poland has granted the right to live and work and claim social security payments to over 3 million Ukrainians.

Ukraine’s Infrastructure Minister Oleksander Kubrakov said that the two neighbours were working on easing transport of Ukraine’s goods to the European Union.

“We are also working on the creation of a joint venture railway company to increase the export potential of the Ukrainian economy,“ Kurbakov said in a statement.

The war in Ukraine, one of the world’s major exporters of wheat and corn, has caused global prices to soar.

Nearly 25 million tonnes of grains are stuck in Ukraine, unable to leave due to infrastructure challenges. Ukraine used to export most of its goods through seaports but since Russia’s invasion it has been forced to export by train or via its small Danube River ports.

Zelenskiy also said that the joint customs control might ease the country into the EU.

“It is also the beginning of our integration into the common customs space of the European Union,“ he said.

The European Commission will issue a report in June on whether to accept Ukraine’s application to become a candidate for EU membership, which is likely to be a drawn-out process that is already causing dissent within the bloc. — Reuters RM talks about turning 30 in the K-pop industry

Death toll rises to 20 in landslide in India’s Manipur

4.PM: Only one camp in Umno