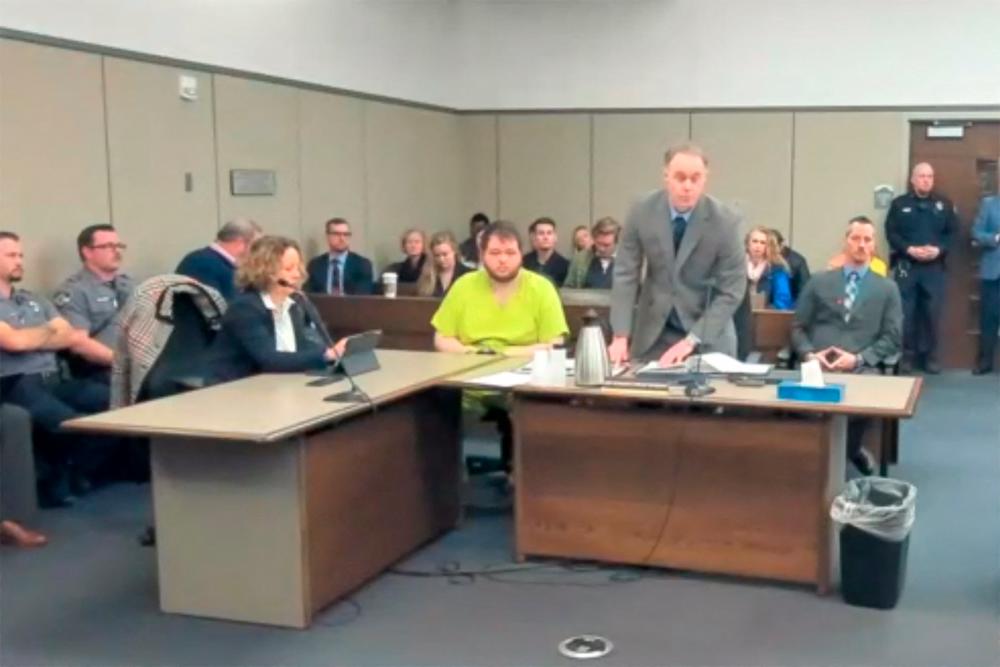 Anderson Lee Aldrich, 22, the suspect in the mass shooting that killed five people and wounded 17 at an LGBTQ nightclub appears seated before a judge during his charging hearing in Colorado Springs, Colorado, U.S. December 6, 2022 in a still image from livestream video. El Paso County Court/Handout via REUTERS

LOS ANGELES: The suspect in a mass shooting that left five people dead at an LGBTQ club in the US state of Colorado was charged yesterday with 305 criminal counts, including murder.

Anderson Lee Aldrich, 22, has been in custody since the rampage last month in Club Q in Colorado Springs that also left at least 18 people wounded.

The suspect, who court-appointed lawyers have said identifies as non-binary, appeared handcuffed and shackled in court yesterday to face the litany of charges.

Both charges carry a maximum life sentence without the possibility of parole.

It is not uncommon in the US for prosecutors to levy multiple charges for the same crime.

So-called “charge stacking” increases the likelihood of conviction in cases where a jury finds the circumstances do not exactly fit one of the charges, and would therefore find the defendant not guilty.

Aldrich, who did not speak during yesterday’s appearance, also faces 86 counts of attempted first-degree murder, as well as dozens of bias-motivated crimes – the name for hate crimes in Colorado – and dozens more of assault.

District attorney Michael Allen told reporters that the sheer number of charges is an indicator of how seriously authorities are taking the attack.

“Obviously when you file 305 counts in a case, that tells the public, this community, this state and this nation that we are taking this case as seriously as we possibly can and we are going to prosecute this case to the fullest extent of the law,” Allen said.

The suspect, who is bearded and heavy-set, wore jail-issue clothes in court and appeared to have recovered from injuries apparently sustained when patrons of Club Q subdued him to end the shooting.

Military veteran Richard Fierro, who was visiting the club with his wife, told reporters he had snatched the attacker’s pistol and used it as a cudgel to hit him.

The Nov 20 mass shooting was the latest in America’s seemingly endless gun violence crisis and shattered the peace of Colorado Springs’ LGBTQ community, as customers and staff at the well-known club were gunned down on a night of revelry.

Matthew Haynes, one of the owners of Club Q, said the fact that hate crime charges had been laid demonstrated that it was a targeted attack.

“The tragedy at Club Q shows that words matter and that words have real-world consequences,” Haynes said, according to the Denver Post.

“We continue to call out those who spread disgusting rhetoric and encourage violence against the LGBTQ community, to end this behavior immediately before more people get hurt.”

Reporting since the attack has revealed a chaotic life for the alleged attacker, with a childhood marked by instability, and parents who suffered from substance abuse problems.

A two-day preliminary hearing was set for Feb 22.

A full jury trial may not happen until some time in 2024, the district attorney said. - AFP