Vaccine shortages arise across US, halting inoculations in some places 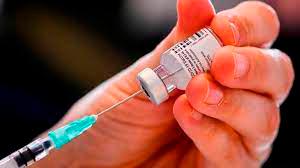 NEW YORK: Scattered vaccine shortages cropped up on the frontlines of the US battle against the coronavirus pandemic yesterday, prompting at least one large New York healthcare system to cancel a slew of appointments of people hoping to be inoculated.

The supply-chain blips arose as the country struggles to speed up the pace of vaccinations. Only 12.3 million doses have been administered, with only 10.6 million people having received at least one of the two required shots, according to the Centres for Disease Control and Prevention (CDC).

In New York, the country’s most populous city, Mayor Bill de Blasio said the city has vaccinated about 300,000 of its more than 8 million residents, but was on course to run dry next week because it was burning through vaccines faster than they were being replenished.

“We’ve been getting resupply right now at a very paltry level of about 100,000 doses a week,” de Blasio said on WNYC radio. “We went through 125,000 in the first four days of this week, and our numbers are increasing every day.”

In Oregon, Governor Kate Brown said a federal official told her the state would not receive additional vaccine supplies because the federal government has none in reserve.

“I am demanding answers from the Trump administration,” Brown said on Twitter.

Similarly, Colorado Governor Jared Polis said he was “extremely disappointed” that the US Department of Health and Human Services “lied to” his state about promised reserved, second doses of the vaccine.

Earlier this week, Health and Human Services Secretary Alex Azar said the federal government would begin distributing a reserve of vaccines to states, a position also taken by the incoming administration of President-elect Joe Biden, which takes over on January 20.

However, the Washington Post reported yesterday morning that the federal government does not have a remaining reserve of the two approved vaccines, one by Pfizer Inc and partner BioNTech and a second from Moderna Inc, which has emergency use authorisation.

Citing unidentified officials, the Post reported the reserve, which the federal government said was initially set aside for the second doses that each vaccine requires, had already been distributed starting in late December.

HHS did not respond immediately to a request for comment. Senior administration officials told the New York Times later yesterday that all of the reserve doses were already dedicated to people who had gotten a first shot, and that Azar had been spelling out the logical extension of its December policy to earmark doses for second shots.

De Blasio, who said vaccine supplies should be allocated to localities commensurate with their ability to administer them, was among three dozen big city mayors who have asked the incoming Biden administration to send Covid-19 vaccine shipments directly to them, bypassing state governments.

At least one New York City healthcare system cancelled vaccination appointments and another suspended new ones amid shortages. A Mount Sinai Hospital spokeswoman said “sudden changes in vaccine supply” forced it to cancel appointments through next Tuesday.

“I don’t know what’s happening,” Rubin said by telephone. “And we would really like to get our allocations.”

Rubin declined to reveal the number of doses NYU Langone usually received, but said its three hospitals and 12 other locations in New York City and Long Island have vaccinated 36,000 people, and have the capacity to handle 5,000-7,000 a day.

Biden yesterday said he would order increased production of syringes and other supplies to ramp up vaccinations against Covid-19 and improve upon the Trump administration’s vaccine rollout that he has called a “dismal failure.”

Under Biden’s plan, federal disaster-relief workers would set up thousands of centres, where retired doctors would administer shots to teachers, grocery store workers, people over 65 years old and other groups who do not currently qualify under current vaccination guidelines.

Since the onset of the pandemic, the virus has infected 23.1 million Americans, about 7 per cent of the population, killing 388,467 of them, according to a Reuters tally.

New York Governor Andrew Cuomo blamed the supply gaps on the federal government, which he said had cut supplies this week to 250,000 doses from 300,000, while expanding the eligibility to include 7 million of the state’s 19 million residents.

“They increased the eligibility, they did not increase the supply,” Cuomo said at a briefing.

According to the CDC, New York state has administered only about 757,000 doses of the 1.9 million it has received. — Reuters