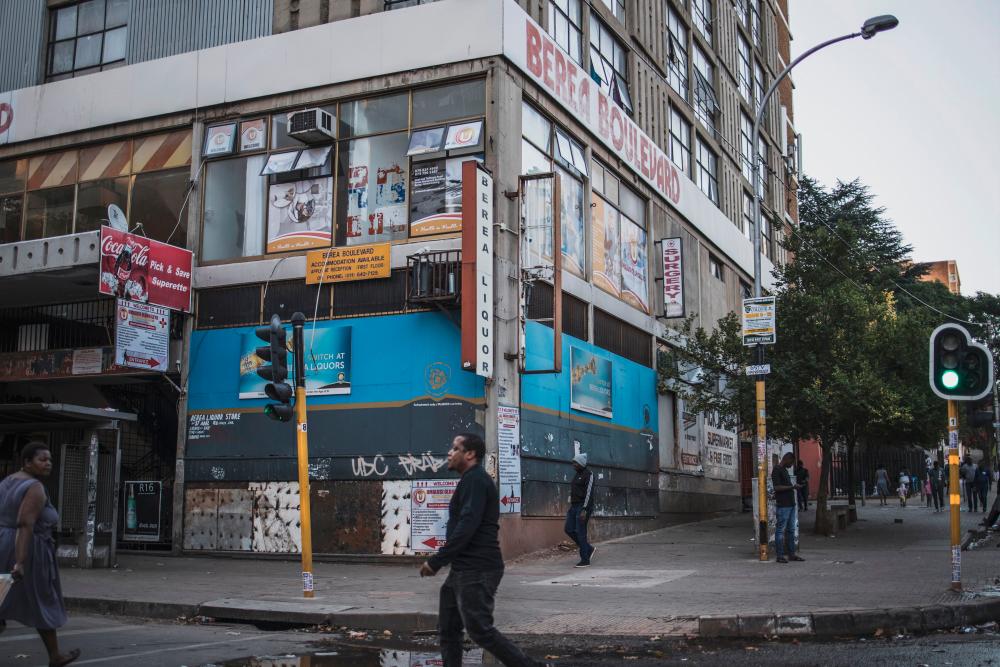 Pedestrians cross the road as they walk past a closed liquor store in Berea, Johannesburg, on April 17, 2020. South African President Cyril Ramaphosa has reiterated today that the sale and export of alcohol in South Africa is forbidden for the whole duration of the lockdown, now extended till the end of April 2020. — AFP

CAPE TOWN: “Mr President we are in the middle of a food crisis. It’s war out here,“ warned Joanie Fredericks, a community leader in Mitchells Plain township in Cape Town.

The desperate plea was made in a video posted on social media to South African President Cyril Ramaphosa who imposed a five-week lockdown to try curb the spread of the coronavirus .

“People have broken into tuck shops. They have attacked people. The simple reason is because they are hungry,“ she said from a kitchen dishing cooked meals into packs for distribution to the poor.

Four weeks into a 35-day lockdown poor communities are facing food shortages as incomes for mostly informal workers have dried up.

Imposed from March 27, the lockdown has placed already cash-strapped citizens under further strain.

The numbers of people lining up for food at the self-funded scheme run by Fredericks and other volunteers are growing by the day.

“But we are way past that Mr President, we are past the stage of sending people away,“ an emotional Fredericks pleaded.

Already, several violent protests have broken out across the country over access to food parcels handed out by authorities.

Hundreds of angry people fought running battles with the police, hurling rocks and setting up street barricades with burning tyres in Mitchells Plain over undelivered food parcels on Tuesday.

Police fired rubber bullets and teargas to disperse them.

“There’s a bunch of us at home getting fat and there’s a bunch of people who really have nothing,“ said Julian May, director of the Centre of Excellence in Food Security, at the University of the Western Cape.

“And it speaks a lot about the inequalities in South Africa (that) are likely to come out,“ said May.

“As people are not getting food parcels or hear of other people getting parcels they are starting to react. And I don’t think that’s going to ease unless there’s more rapid delivery of food to people in poor areas.”

South Africa is ranked one of the most unequal countries in the world.

A study by the national statistics agency in 2017 found that 20 percent of households in the country of 57 million, had inadequate access to food.

The lockdown and its impact on the poorest is at breaking point.

Already South Africa has a history of frequent protests over basics like water and housing crisis.

“Now when you add hunger to that, now there’s deprivation ...and then you add the enforcement with the army and police that needs to be handled very carefully,“ warned Drimie.

The Institute for Poverty, Land and Agrarian Studies (PLAAS) warned that if people cannot get food, “there is every likelihood of violent conflict, including widespread looting”.

Several videos have been shared on social media of supermarkets being stormed in recent days.

One of the raids was at a branch of one of South Africa’s largest grocery store chains.

People were shown carting away baskets filled with unpaid goods in a township in the Western Cape province.

Social Development minister Lindiwe Zulu this week promised to increase food aid deliveries after only 48,500 parcels were distributed in the first week of April.

Government has budgeted 43 million rand ($2.2 million) to feed the most vulnerable and more will be needed, she said.

South Africa has one of the largest social security schemes on the continent, handing out grants to 18 million vulnerable people every month.

Zulu said government will build on the already existing safety net “because we know that the demand is going to be much bigger”.

The South African Social Security Agency reported that the number of calls for help have ballooned in recent weeks.

With 2,783 cases, including 50 fatalities, the country has declared the most infections on the continent. — AFP