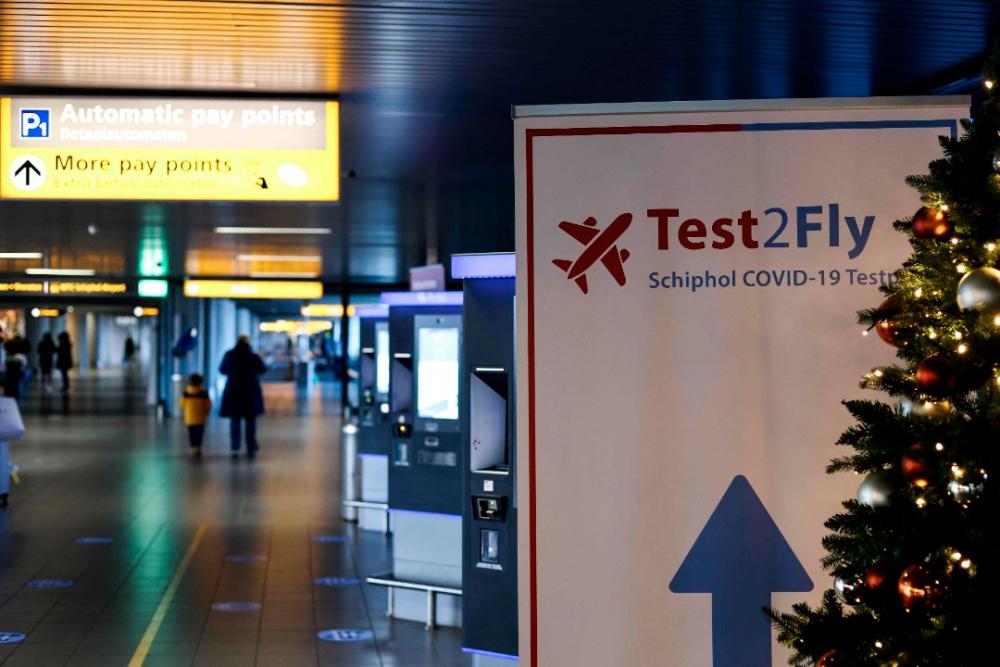 Dutch health authorities said November 29 they have found another case of the new Omicron Covid-19 variant among passengers arriving from South Africa, bringing the total to 14. -AFPpix

GENEVA: The WHO said Tuesday that those not fully vaccinated against Covid-19 who are also vulnerable to the disease, including over-60s, should put off travel to areas with community transmission.

The World Health Organization also said blanket travel bans would not stop the spread of the Omicron variant.

The new Covid-19 variant of concern, which the WHO says poses a “very high” risk globally, has prompted many countries to shut their borders.

“Blanket travel bans will not prevent the international spread, and they place a heavy burden on lives and livelihoods,“ the WHO said in a travel advice statement on Omicron.

“In addition, they can adversely impact global health efforts during a pandemic by disincentivising countries to report and share epidemiological and sequencing data.”

First reported to the WHO less than a week ago after being detected in southern Africa earlier this month, Omicron has already appeared in several countries.

The WHO noted the increasing number of governments introducing travel measures, including temporarily banning arrivals from countries where the variant has been found.

The WHO said that as of Sunday, 56 countries were reportedly implementing travel measures aimed at potentially delaying the importation of the new variant.

“It is expected that the Omicron variant will be detected in an increasing number of countries as national authorities step up their surveillance and sequencing activities,“ it said.

The WHO later issued a correction to the final part of that travel advice, relating who should be advised to postpone travel, and to where.

“Persons who have not been fully vaccinated or do not have proof of previous SARS-CoV-2 infection and are at increased risk of developing severe disease and dying, including people 60 years of age or older or those with comorbidities that present increased risk of severe Covid-19 (e.g. heart disease, cancer and diabetes) should be advised to postpone travel to areas with community transmission,“ the WHO’s corrected line said.

Elsewhere, the WHO advised countries to apply an “evidence-informed and risk-based approach” when implementing travel measures.

The UN health agency said national authorities in countries of departure, transit and arrival could apply mitigation measures that might delay or reduce the exportation and importation of the variant.

They could include screening passengers, testing and quarantine.

“All measures should be commensurate with the risk, time-limited and applied with respect to travellers’ dignity, human rights and fundamental freedoms.”

The WHO said that “essential international travel”, including for humanitarian missions, repatriations and transport of vital supplies, should always be prioritised during the pandemic.

“We call on all member states to take rational, proportional risk-reduction measures,“ he said.

“The global response must be calm, coordinated and coherent.”

Tedros stressed that it remains unclear how dangerous the variant is.

“We still have more questions than answers about the effect of Omicron on transmission, severity of disease, and the effectiveness of tests, therapeutics and vaccines,“ he said.

The WHO chief said it was understandable that countries wanted to protect their citizens “against a variant that we don’t yet fully understand”.

“But I am equally concerned that several member states are introducing blunt, blanket measures that are not evidence-based or effective on their own, and which will only worsen inequities.” — AFP