Not as stylish and techy as the hybrid variant, but it definitely will have its fans ... 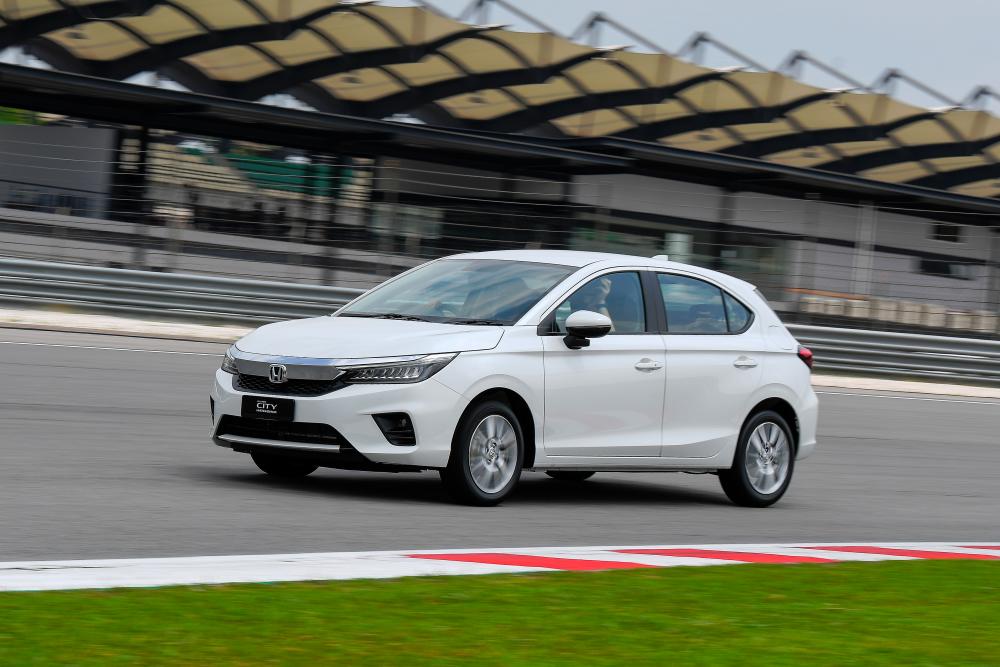 ON Nov 9, the highly-anticipated all-new Honda City Hatchback was open for bookings at all Honda dealerships nationwide. The company presented it as “A Step Above” in its segment, with the City sporting a new form in a stylish hatchback body type.

Conceptualised to be an “energetic” hatchback, it was developed through a combination of cutting-edge styling with a sporty feel and will be officially launched before the end of the year.

A week later, the company treated the media to a teaser test drive session at the Sepang F1 Circuit, involving both variants of the City Hatchback, the “RS e:HEV” and “Petrol”.

The former is powered by 1.5-litre Sports intelligent Multi-Mode Drive (i-MMD) powertrain that delivers a powerful and immediate response through two electric motors for effortless drivability and efficiency. Yes, it is a hybrid.

Its has LED headlamps with LED daytime running lights, LED front foglamps, LED rear combi lights and 16-inch alloy rims. A much-coveted and popular feature synonymous with the Honda Jazz that is also available in the new hatchback is the four-mode Ultra Seats. The practical and versatile first-in-class feature allows the rear seats to be folded flat or flipped up in four configuration modes – Utility, Long, Tall and Refresh, to suit different needs of storage space by maximising the rear space creatively when transporting items.

Another advanced and first-in-segment feature is the remote engine start which provides added convenience, enabling the driver to remotely activate the engine and air-conditioning before entering the car, which also has rear air-conditioning ventilation for added comfort and convenience for rear seat passengers.

A segment-first safety feature in the new hatchback is the Honda LaneWatch, a camera-based advanced safety technology (pix, far right) which reduces blind spots by providing real-time visual in the infotainment system, when the left turn signal is activated or LaneWatch button is pressed.

It was only a couple of laps around the Sepang circuit’s South Track, which is about 2.6km long and it wasn’t a pedal-to-the-metal, angry drive; it was a “teaser drive”, not a track day. The purpose was not to see how quick the City Hatchback is, but rather for Honda to demonstrate the LaneWatch, how the car feels under normal use as compared to its popular saloon counterpart and also the difference between the Petrol and the RS e:HEV.

A segment competitor, which is very close in terms of price bracket, displacement and general specifications, was also used to further show how the City Hatchback is the one you should go for, be it the Petrol or RS e:HEV. The media representatives sampled all three and everyone agreed that as far as driving dynamics go, the City Hatchback of either variant is the better choice.

This one or the hybrid?

If you prefer simplicity, this variant is for you. Naturally less complicated than its hybrid counterpart, with just a good ol’ internal combustion engine with highest-in-class 119hp, a conventional handbrake lever and the cleaner, less-sporty exterior lines are among the things that you find as good enough for your needs.

Just 145Nm of torque is more than sufficient – it’s a four-door Japanese compact hatchback and not a heavy station wagon or crossover SUV, so the hybrid’s “powerful and immediate response” is unnecessary. You don’t plan to drag-race it, anyway! After all, Honda itself said the Petrol variant’s 119hp/145Nm combo offers “an ideal balance of exciting performance and fuel efficiency for a hatchback body type”.

I can live without “exclusive” high-gloss this, piano-black that and “sporty” or “sophisticated” parts that make the City Hatchback’s rear “look lighter with an active and young impression” (says Honda). I just really appreciate it as it is, in its Petrol variant form.

I don’t mind a couple of the features in the Honda Sensing driver assistance safety systems the RS e:HEV has. I can’t remember actually using the cruise control in the many cars I have owned and reviewed over the years, other than just to try them. Also, I prefer to operate the high-beam myself, rather than let the car do it for me.

All the active and passive safety systems/features the City Hatchback Petrol meet my expectations. Realistically, the aforementioned LaneWatch is not very important to me too but it’s nice to have it. Many people share my “less complicated, less risk” view, especially those who plan to own cars like the new City Hatchback for a long time.

Lastly, the Petrol, being much lighter than the RS e:HEV, is more nippy and I enjoy driving it around the circuit more; it has the highest-in-class power and looks cleaner, most likely the City Hatchback’s actual original design, sans the RS costume.

*Be advised, aside from all the features in the City Hatchback mentioned in this article, Honda Malaysia will only release the other specifications and also prices during the yet-to-be-announced launch.