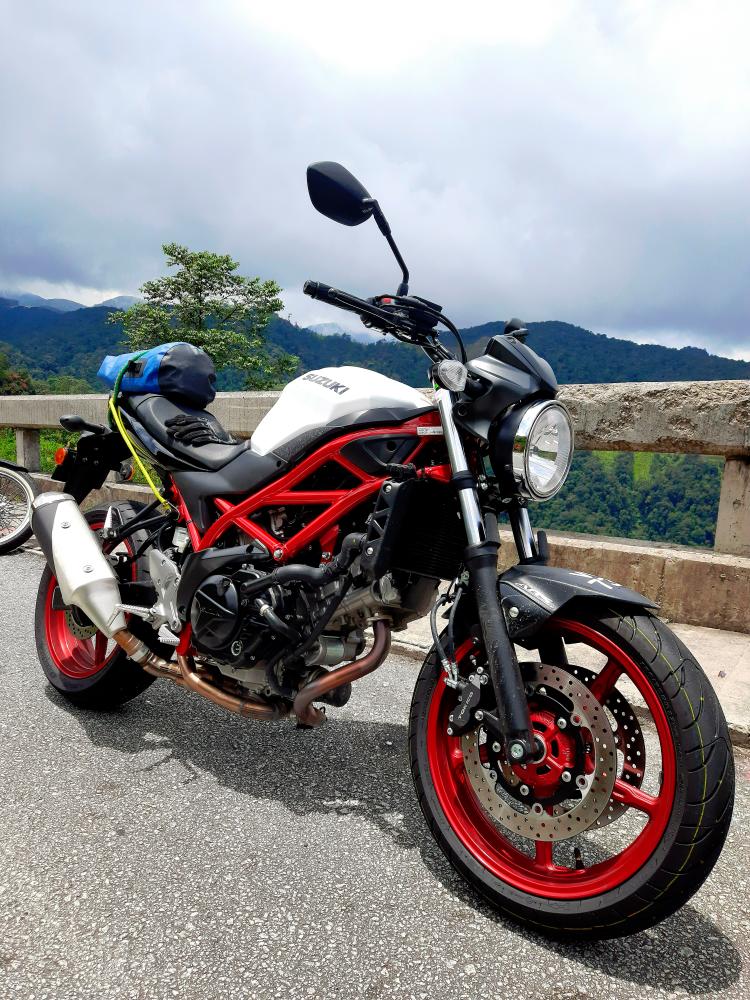 SUZUKI’s SV series of motorcycles was created back in 1999 and is still doing well till today, which says a lot about what Suzuki had set out to do, basically a standard motorcycle with mid-sized V-twin engine and medium performance components.

Motorcycle manufacturers refer to a bike like this SV650A as “standard”, but somewhere along the way, some motorcycle journalist came up with the word “naked” for machines like it, because, well, it’s obviously sexier!

At Suzuki Malaysia Sdn Bhd, I was presented with the SV650A (“A” indicates the ABS/anti-lock braking system-equipped variant, the only one available for our market) in Pearl Brilliant White, red frame and red rims.

Without decals, stripes and flashy graphics on its tank – the only part with that shade of white – it looks even more naked, but nowhere near sexy. It’s not a feast for the eyes but more of a look-carefully-to-appreciate its, umm... naked-ness.

With a 785cm seat height, the seating/riding position is rather comfortable for me. It’s very much sitting “in” the bike rather than “on” it. For my wee 165cm height, I did not lean forward much and my feet are not far back, which makes riding it in the city comfortable. The machine feels very compact (it’s in the middleweight category, anyway) and with me straddling it, I feel very much “one” with the bike and that’s a very good sign.

Riding it around the city for a couple of days was very enjoyable, as its 72hp liquid-cooled, twin overhead camshaft, 90-degree, dual spark, V-twin 645cc engine works so well in an urban environment, perfectly and smoothly pulling away with enthusiasm from idle up to its 10,000rpm redline, to easily deal with the lethal Klang Valley motorists.

The close-ratio six-speed transmission makes the bike superbly adept for commuting and also spirited riding. Complementing the experience is the pleasurable boom out of its beefy muffler, especially during acceleration.

Riding the Suzi in the city is even nicer with its Low-RPM Assist feature. Seamlessly adjusting engine speed during take-off and low-speed running, for smoother power delivery and optimum combustion efficiency, it lets you concentrate more on the clutch (lever) operations rather than both clutch and throttle. This is even more helpful when making U-turns.

This may seem trivia to seasoned riders but even such riders unintentionally stall their bikes, sometimes. Abrupt stalling can even be risky in very heavy traffic congestion, especially with a 200kg bike...

Its dual four-piston Tokico front brake calipers with 290mm fully-floating stainless steel rotors is equipped with the aforementioned ABS, which is even more crucial when faced with those idiotic and abrupt lane-changing motorists, who most often don’t use their indicators too. Grrr...

The seat’s front-most part is a bit too firm to deal with bad roads but it provides a good “feel” for corner-attacking fun; further back is soft and nice for touring. Also, despite the sufficient pillion seat size, it is not so well-padded and this Suzi is not so pillion-friendly, thanks to the absence of any grab rail. If you don’t mind your friend hugging you, carry on!

Away from them all

Thankfully, the media was allowed to cross state borders (for “work”) during the Movement Control Order and the SV650A is a very nice and fun excuse to do just that. My hometown Ipoh is a good not-so-far destination for a night’s stay, for some local cuisines and also a short zig-zaggy ride heading towards Cameron Highlands.

As a true naked bike, only the necessities are on this bike that has no extra fat on and in it, not even riding modes, traction control and other techno tricks. For the Ipoh ride, I had to be creative with my bungee cords to firmly secure my bag on the pillion seat, since there are no specific anchor points for it.

Once the bag is secured and after performing some very high-tech, static pre-ride “shake-shake” test by hand, I was ready to go to Ipoh, via the North-South highway, curious about how the little Suzi handles itself at much higher speeds.

This Suzi did not disappoint. Sprints, top gear acceleration during mid-range overtakes and high-speed stability, it performed all very well indeed and eagerly, at that. I really like that top gear acceleration from mid-range; I constantly played with this Suzi’s fun ability, playing catch-up with a friend and fellow journalist who’s testing the current Katana (GSX-S1000S).

It was all fun and thrilling until the Suzi starts to mumble some complaints at around 200km/h. Beeing a naked bike, I had nowhere to hide from the windblast and I’m not the petite type. No matter, there are so many kinds of SV650-specific and universal aftermarket fairings, screens and cowlings you can find out there, to address this issue.

After all the makans and catching-up-with-old-friends were done in Ipoh, the next day was all about that ride along the Federal Route FT185 connecting Simpang Pulai (Ipoh) with Blue Valley (Pahang), before heading home. The plan was not going all the way to the Pahang border, but turning back after a brief stop for photos and chilly air at a landslide-prone area, which happens to have a breathtaking vista.

Along the stretch, the SV650A proved it can also be a fun corner-attack machine. In the hands of a very seasoned, track day-enthusiast, it can be a peg-scraping terror along such a road. I’m not that type but the Suzi was confidence-inspiring enough to let me push and enjoy it, sans any scrapes.

Its suspension did feel a bit too soft for me, but during those leans, quick changes to opposite angles and blasting out of corners, the Suzi was still a very fun bike for me. Some simple upgrades and/or tweaks to its suspension system will surely make me enjoy it even more.

The SV650A, also available in Glass Sparkle Black, sells for RM37,289 (excluding insurance, road tax and registration fee) and comes with a two-year or 20,000km standard warranty (whichever comes first). It is sold at all Suzuki Big Bike World and Suzuki Station Plus outlets in Malaysia.

With its sporty personality, spirited and super-smooth V-twin engine, excellent handling characteristics and relatively low purchase price, the SV650A is my top recommendation to those seeking a middleweight bike that is both very easy to operate in the cities and offers lots of thrills on the outskirts.

Suzuki should and must keep on refining the SV series. After all, it has stayed relevant since its 1999 debut, where it became popular with racers which prompted a rebirth of the “lightweight twins” racing classes across North America, outselling some of its rivals which previously populated the class.

Such popularity also created a wide variety of aftermarket parts, performance upgrades, conversion kits and accessories industry for it, where owners can go crazy customising their SV650A’s, as long as the wallet allows.