With a different team winning, the championship battle will be intense in the final round 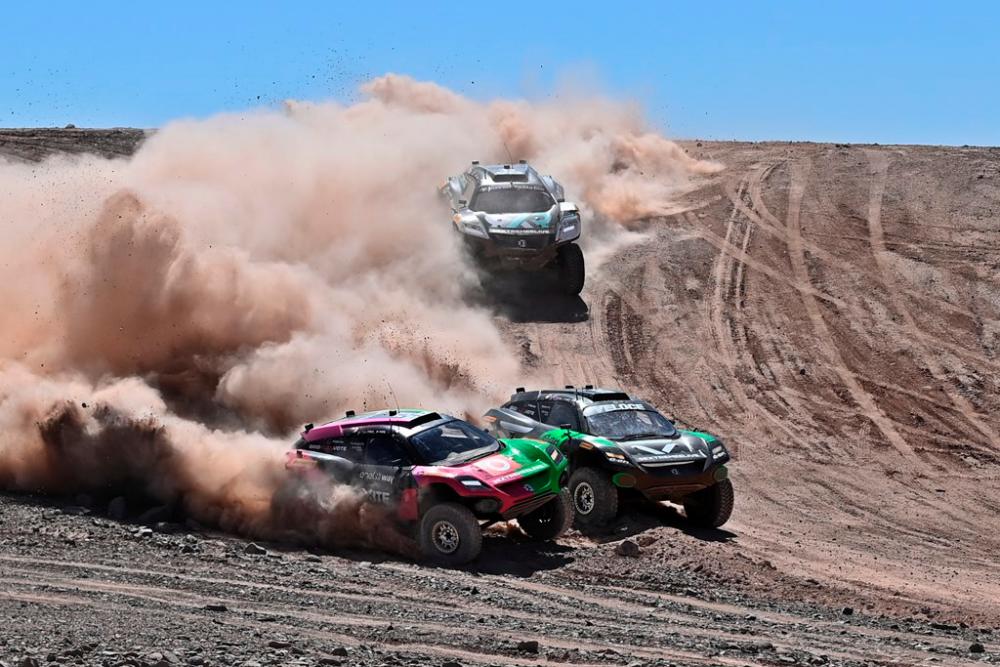 THE Extreme E electric off-road racing series headed down will end its second season in South America, with the second last round held recently in Chile as the Antofagasta Minerals Copper X Prix. As with every round of Extreme E, the location for this round was chosen to highlight challenging climate issues that this region is facing. In this case, it was the Atacama Desert which is the driest (non-polar) region in the world.

Extreme E’s decision to race in this part of Chile was to shine a spotlight on the copper industry, and its importance to electric vehicles (EVs), like those racing in the event. As EVs rely heavily on copper not only for production but also for battery charging, Extreme E aims to highlight the development of sustainable alternatives.

The Antofagasta Minerals copper mine provided an ideal site for the competition and, through the broadcasts, was able to showcase innovative and inclusive methods which are positively transforming this crucial industry. And without improved sustainability, the growing demand for metals could lead to a steep increase in the impacts of mining on the environment.

The course laid out for the 10 teams with 20 drivers (one male, one female for each crew) was 3 kms long with multiple elevation changes, variations in gradient, high-speed corners, and jumps. Given the wide open spaces of the desert, it was expected to give the fastest, most thrilling race course yet.

X44 Vida Carbon Racing took their first victory of the season in a dramatic first X Prix Final in Chile. Sébastien Loeb and Cristina Gutierrez finished second on course, but penalties for on track winners NEOM McLaren Extreme E dropped the team down the standings.

The American team had finished the race in third but, in pushing hard to make the most of the opportunity, they received a penalty for missing a waypoint, which subsequently put them off the podium and into fourth.

“We are very happy with the result today, of course. We were surprised to see that Rosberg X Racing weren’t competing in the Final, but we didn’t have a lot of time to think about it as we were racing straight away,” said Loeb. “It was a very strong fight against some great teams but Cristina was incredible, securing the fastest lap of all the drivers in the Final.”

“It was a very tough race so I was surprised to get the fastest lap, but it shows what an incredible opportunity Extreme E is providing for female drivers to prove ourselves and show we can compete against some of the best drivers in the world. Now we go to Uruguay, which is very good for me as I love to race in South America. Hopefully we can even get another race win and maybe the championship too,” said Gutierrez.

Prior to the main races, there was a change in drivers for the ABT CUPRA XE. Due to injuries sustained during practices, Jutta Kleinschmidt was unable to take part in further activities and was replaced by Klara Andersson. The Swedish driver, who would partner Nasser Al-Attiyah, was introduced to the championship during the Rookie Test which followed the Enel X Island X Prix in Season 1.

The scene was set for a thrilling climax to the Antofagasta Minerals Copper X Prix Final, with all three of RXR’s nearest championship rivals lining up on the start line while Johan Kristoffersson and Mikaela Alin-Kottulinsky watched on from the paddock.

Loeb took the lead in the opening corners while behind, Tanner Foust muscled through the field to put the NEOM McLaren Extreme E in second. As the teams tussled for position, No.99 GMC HUMMER EV Chip Ganassi Racing’s Kyle LeDuc took third place from Carlos Sainz Snr. despite a half-spin after passing the ACCIONA | SAINZ XE Team.

ABT CUPRA XE’s Nasser Al-Attiyah kept the other teams in his sights as all five ODYSSEY 21s (the vehicles used by all teams) remained close, with Foust putting more and more pressure on Loeb out in front. The American threw everything he had into a left-hander, passing Loeb while sideways to put NEOM McLaren Extreme E at the front of the pack as the teams neared the Switch Zone.

The fight for the win fell to Gilmour and Gutierrez, and the Spaniard made clever use of her ENOWA Hyperdrive to steal the lead early on in their first lap. The front two pulled away from No.99 GMC HUMMER EV Chip Ganassi Racing’s Sara Price in third, while Extreme E debutant Klara Andersson continued to impress for ABT CUPRA XE as she held off Laia Sanz in fifth for the ACCIONA | SAINZ XE Team.

More wheel-to-wheel action between the X44 Vida Carbon Racing and NEOM McLaren Extreme E cars saw Gilmour side-by-side with Gutierrez before passing down the inside to finish in first on course. Aware of at least one penalty for her team, Price pushed hard to close the gap to Gilmour, but a 5-second penalty of their own for missing a waypoint earlier in the Final thwarted her efforts and saw No.99 GMC HUMMER EV Chip Ganassi Racing classified fourth.

The final round will be on November 26/27 at Punta del Este in Uruguay.