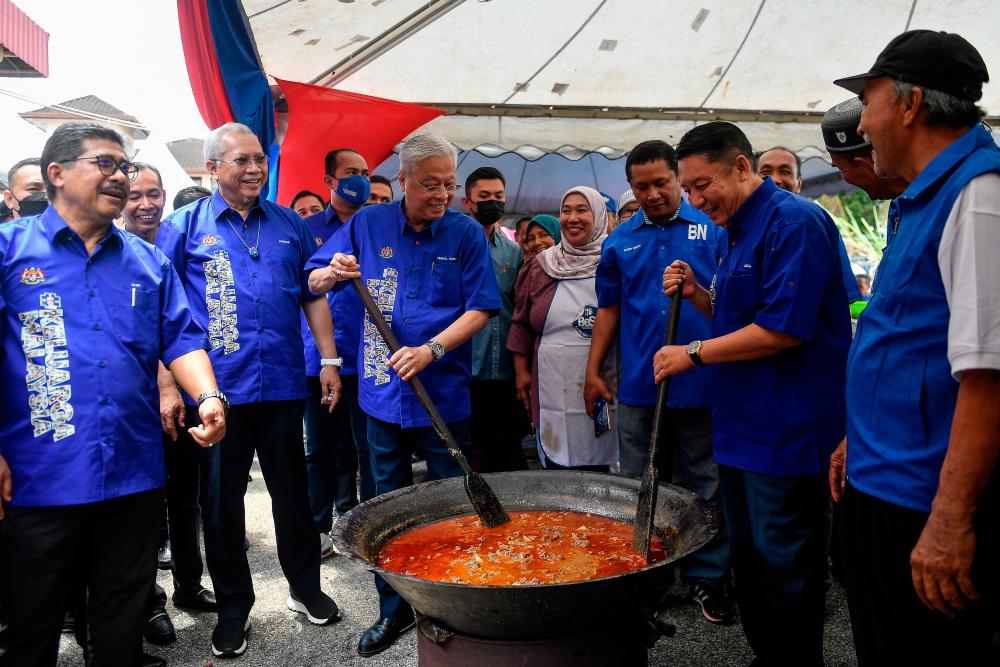 ‘Gulai kawah’, ‘ayam goreng kunyit’, sambal tilapia and pickled cucumber were among the dishes prepared and served for Ismail Sabri and other visitors at the event.

The prime minister, who arrived at 12.20 pm at the Yayasan Kemiskinan Kelantan (YKK) building in Ketereh, near here, was accompanied by the Communications and Multimedia Minister-cum-Kelantan AKM Tour Coordinator, Tan Sri Annuar Musa.

He then took the opportunity to help cook gulai kawah and mingle with local folk.

After that, while heading to the YKK main hall, Ismail Sabri was entertained by a silat demonstration and singing performances by the Pentarama group from the Information Department.

The prime minister also spent over an hour greeting and mingling with visitors, including taking selfies, before leaving the event at about 1.40 pm.

Meanwhile, a resident from Kok Lanas, Siti Hamnah Abdullah, 59, expressed her excitement about meeting the country’s number one leader at the programme.

“I heard from a friend about the invitation to the Bekwoh programme. So, I agreed to go because I was excited to meet Malaysia’s number one leader face-to-face and take a selfie with him,” she said when met by Bernama today.

Nur Hisham Mahmud, 42, from Telipot, meanwhile, said the Ketereh Parliament Family Bekwoh programme was really good as it fostered close ties between the people and their leaders.

“I came here with my family at about 10 am because I was very excited to meet the prime minister. Happy to meet him face-to-face,” he said, adding the food served was also very appetising.

The AKM Kelantan tour-themed ‘Malaysian Family, Digital Family’, which kicked off yesterday until tomorrow (July 24), is offering various programmes specifically planned for the people of Kelantan in line with the government's efforts to strengthen the country's digitalisation initiative.-Bernama Dementia: Her Majesty urges govt to set up centre to train caregivers

4.CPO futures to trade on downside bias next week on rising stockpile concerns