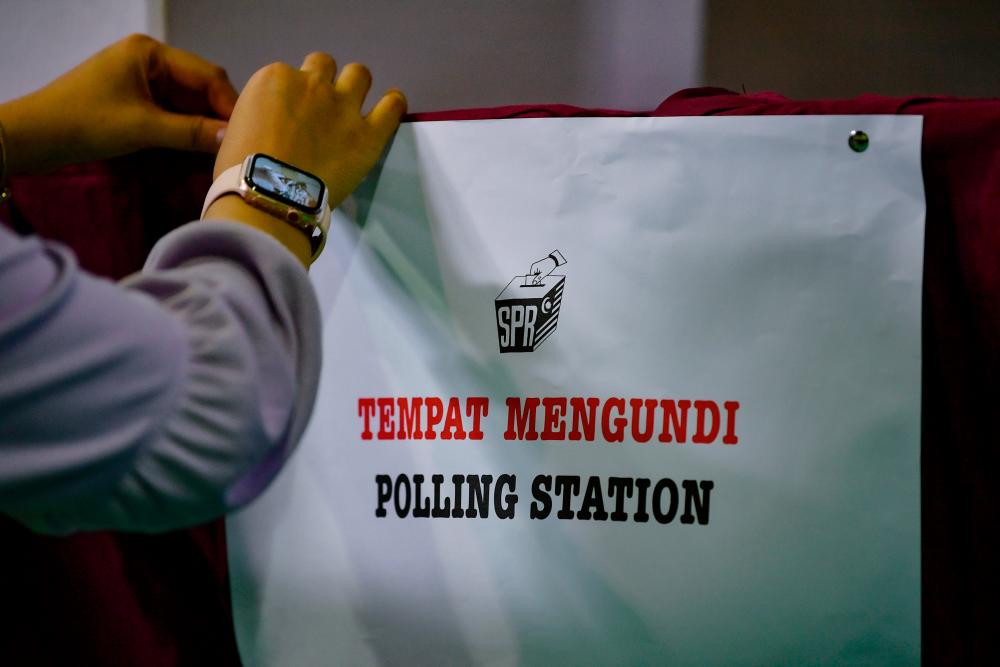 THE Sarawak state election could well determine the course for the general election (GE) due by 2023. The GE may be held sooner rather than later depending on the nature of the results.

Although the Election Commission (EC) allows ceramah to be organised in areas with limited internet connectivity during the campaign period, Sarawakians in general may not be motivated to go out to vote. Part of the reason being the new Omicron variant that has emerged globally in recent weeks.

The Malacca state election that concluded few weeks ago (Nov 21) showed an overall voter turnout of 65.85%, below the EC’s forecasted target of 70%.

Even with Undi18 and automatic voter registration coming into effect on Dec 15, Sarawakians aged 18 to 20 this year will still not be able to discharge their civic rights in the state election.

Minister in the Prime Minister’s Department in charge of Parliament and Law Datuk Seri Wan Junaidi Tuanku Jaafar indicated that the implementation of the Constitution (Amendment) Act 2019 reducing the voting age from 21 to 18 will begin from January 2022.

Therefore, the 12th Sarawak state election will be based on the electoral roll that was passed before the dissolution of the State Legislative Assembly on Nov 3.

As Sarawakians based in the peninsula are unlikely to make logistical arrangements to return home one week before Christmas, the state may experience a lower voter turnout – lower than 65%.

Like many Sabahans and Malaccans, localised Sarawakians appear to be more concerned about bread-and-butter issues such as cost of living, employment and income over who will form the next state government.

Based on the 12th Malaysia Plan (12MP), Sarawak recorded the lowest gross domestic product (GDP) growth compared with other states – at merely 0.9% per annum between 2016 and 2020.

The economic performance of Sarawak during the past five years is lower than the national average of 2.7% per annum.

The on-and-off interstate travel ban and continuous closure of international borders for over two years have forced many businesses in Sabah, Malacca and Sarawak to shutter temporarily or permanently.

Simply put, the lockdowns have dealt a devastating blow to micro and small businesses.

Such a phenomenon is reflected particularly in city centres of Kota Kinabalu and Kuching, as well as the famous Jonker Street in Malacca.

Shutters were down for most of the sea and land tour agencies, and some even displayed signs that the shop lots were available for rent.

As a result, the spending multiplier (i.e. the spending effect) of tourists, which goes beyond the immediate local tourism hotspots or sites has become almost non-existent.

This means businesses, especially small enterprises that rely on tourism receipts also have lost a critical income stream or source.

The drastic fall of domestic tourists in three Malaysian states between 2019 and 2020 could have contributed to the increase in the absolute poverty rates of Malacca, Sabah and Sarawak by 2.2, 5.8 and 3.9 percentage points in 2020, respectively, according to the Statistics Department
of Malaysia.

Besides the ongoing Covid-19 pandemic, the low prices of crude oil, palm oil and rubber are among the factors leading to the slower economic growth in Sarawak, translating to a higher absolute poverty rate of 12.9%.

As most Sarawakians are involved in semi- and low-skilled jobs, this contributed to the low median household income in the rural areas, which was RM3,195 in 2019, compared with the national average of RM3,828.

Furthermore, the Covid-19 pandemic exposed how vulnerable Sarawakians are when accessing roads and treated water supply as well as health, education and digital infrastructure.

Although a total of 795km of rural roads in Sarawak were constructed and upgraded in the 2016-2020 period, only 59.4% of the Pan Borneo project in Sarawak is completed.

Aside from sanitation and drainage systems, the provision of sewerage and waste disposal services in rural Sarawak remains a challenge due to the sparsely-populated areas, challenging geographical terrain and poor accessibility to project sites.

State district officers still have to drive through muddy, uneven roads, besides having a boat ride to reach the remote or rural population.

A teacher from Sarawak had to lead a group of primary and secondary school students from his village in Nanga Sumpa and nearby Nanga Jambu in Lubok Antu
on a jungle trek just for better internet coverage.

Also, Sarawak has a smaller distribution of doctors than in the peninsula. In 2019, the official ratio of doctors to the population in Sarawak was 1:682, lower than the national average of 1:482.

A lack of medical specialists and amenities has raised the cost of healthcare.

Limited access to digital services has deprived some students based in rural Sarawak of accessing online learning materials.

Moreover, the issue of dilapidated schools in Sarawak is a hindrance for students to experience a conducive teaching and learning environment.

Due to under-developed infrastructures, Sarawak continues to face enormous challenges in attracting investment for industrial development.

When there is a lack of a supportive ecosystem (i.e. availability of local technology, skilled talent, efficient supply chain and attractive incentives) together with lower investment, this will result in lower GDP growth, and by extension, higher unemployment.

Youth unemployment has become an issue among Sarawakians as well. In 2020, 12.3% of Sarawakian youths were jobless, higher than the national average of 12%.

Therefore, to restore the economic livelihoods among Sarawakians, the next state government should consider implementing the following initiatives:

1. Conduct periodic reviews (i.e. once in three months) for all short-, medium- and long-term development strategies, ensuring all plans can be implemented within a specific timeframe;

2. Work with the private sectors in rural areas to help attract higher value investment, promote rural tourism activities and agro-tourism, enable the products to be sold via digital applications and social media, as well as enhance employability through knowledge enhancement and skills training;

3. Increase crop diversification and produce high-quality agricultural products to diversify the revenue stream. Besides reducing dependence on palm oil production, Sarawak can potentially develop a major food hub with Sabah and Kalimantan to fulfil the increasing demand from major markets such as China, Singapore and Brunei;

4. Federal Agricultural Marketing Authority (Fama) and related government agencies can assist rural farmers in Sarawak in transporting agricultural produce to major cities of Sarawak or for export; and

5. Partner with the private sector by providing apprenticeships where its youths would have the opportunity to reskill, upskill and cross-skill, besides securing a job after completion of the apprenticeship.

It is good that Sarawak will continue to receive between 15% and 18% annually of the total basic development allocation to improve infrastructure and basic facilities in Sarawak under the 12MP.

However, to realise the goal of increasing Sarawak’s annual GDP growth to 5.3%, it is time for the state government to enhance the development potential of its cities and towns in the next four years. For instance, Bintulu, Kapit, Miri and Sibu have their respective potential for more economic development.

In a nutshell, political parties or candidates who prioritise restoring the economic livelihoods among Sarawakians will stand a better chance of winning the upcoming state election, and thereby governing the state.