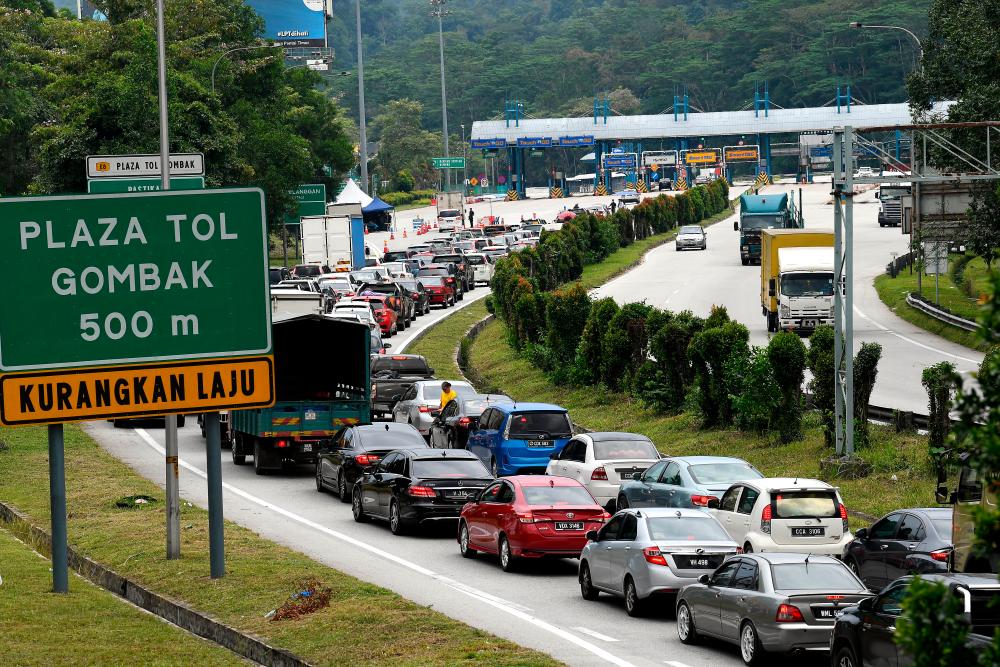 Filepix taken on May 16, shows a bumper-to-bumper crawl the Gombak toll plaza. — Bernama

PUTRAJAYA: More than 1,000 vehicles have been caught attempting unauthorised interstate travel daily for the past two days and this clearly shows that many Malaysians are still stubbornly trying to ‘balik kampung’ (returning) to their hometowns.

“Surprisingly, many are still trying to return to their villages. Yesterday, 1,175 vehicles were caught trying to cross the state borders to return to their hometowns and they were subsequently asked to turn around by the police,” he said this at a daily press conference on the Conditional Movement Control Order (CMCO) here, today.

Ismail Sabri also urged the public to forget the plan for interstate travel as it would have been very frustrating to be told to turn around.

On May 16, a total of 1,248 vehicles were caught attempting unauthorised interstate travel and ordered to turn around by the police.

Meanwhile, when asked about the findings of the survey conducted by the National Security Council (MKN), he said more than 70% of 215,712 respondents had agreed to celebrate the first day of Aidilfitri with family members in the same house.

“If this is indeed the trend and the way people see it, then I don’t have to worry too much. Because 74% don’t want to open their home for Aidilfitri and limited to family members in the house only.

“That is the hope of the government, even if we are allowed up to 20 people in one house. If this happens then we should not be too worried and we can break the Covid-19 chain because many fear there will be ‘balik kampung’ clusters,” he said.

He also said the police had established 148 interstate roadblocks nationwide and inspected a total of 156,096 vehicles.

In another development, Ismail Sabri said the government would consult with the Attorney-General’s Chambers, the Ministry of Health (MOH) and MKN on the need to amend the law under the Prevention and Control of Infectious Diseases Act 1988 (Act 342), which would allow action to be taken against stubborn parents and guardians for taking their children aged 12 years and younger to public places.

“We heard that many children are still being brought to the shopping complexes. This is a matter of law. If they want to take action against their parents, it must be stipulated in the law or regulation under Act 342.

“We will discuss with the Attorney-General, MOH and MKN and if this is agreed upon, the law can be amended and those found violating the law they can be punished under Act 342,” he said.

“The cumulative number of construction sites inspected currently stood at 4,183, of which 425 were SOP-compliance, 150 SOP non-compliance and given warnings and five others were ordered to close,” he said, adding that the inspection also found that 3,603 sites were not operational.