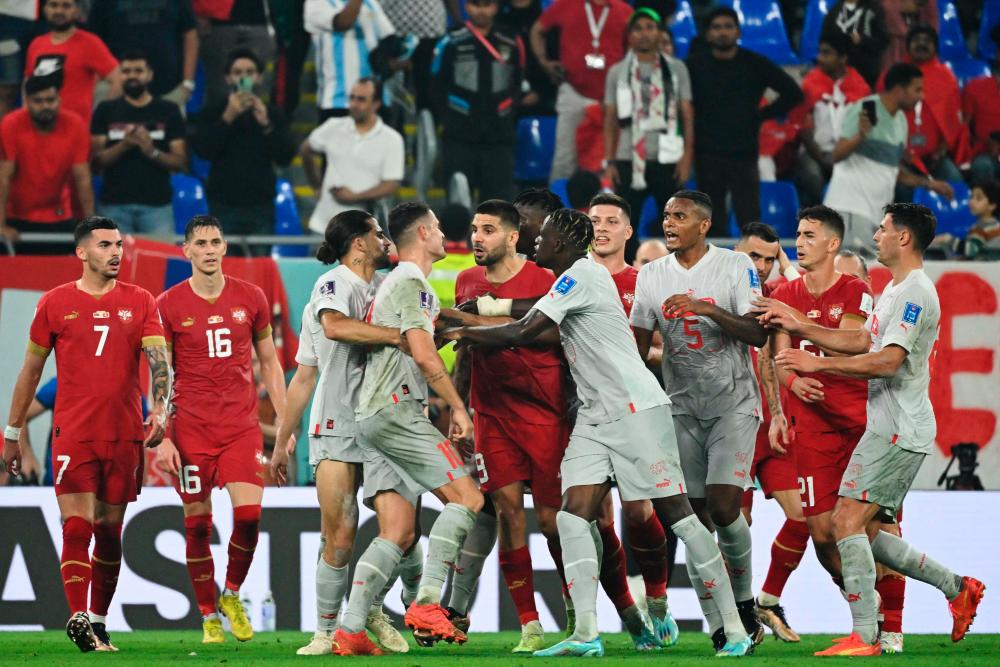 DOHA: Fans at the high-stakes World Cup group match between Serbia and Switzerland on Friday were told to “stop all discriminatory chants and gestures” as tensions on the pitch boiled over.

It was not immediately clear what triggered the announcement during a match that the Swiss won 3-2 to advance to the last 16 and eliminate Serbia, but it followed a confrontation between Swiss captain Granit Xhaka and Serbia players.

The argument in the second half drew in Switzerland forward Breel Embolo and Serbia substitutes ran onto the pitch at Stadium 974 to remonstrate with Swiss players before the referee brought the situation under control.

Serbia coach Dragan Stojkovic said he did not know what sparked the incident.

“Something was said to the players maybe. I don’t know what happened really. I can’t tell you the reason why and what happened exactly,“ Stojkovic said in the post-match press conference.

“Sometimes the tensions come and some maybe bad words can create some uncomfortable behaviour, but it’s nothing special. It’s normal let’s say for this kind of game.”

It is not the first time that a World Cup match between Switzerland and Serbia has been played in a tense atmosphere.

At the 2018 tournament in Russia, Xhaka and Xherdan Shaqiri celebrated their goals in Switzerland's 2-1 win by making the two-handed eagle gesture to mimic the Albanian flag, enraging the Serbia players.

Xhaka and Shaqiri come from families with roots in Kosovo, the former Serb province with a majority ethnic Albanian population.

The underlying source of tension is Kosovo's 2008 declaration of independence from Serbia. The latter does not recognise the move and has encouraged Kosovo's Serb minority to remain loyal to Belgrade.

Shaqiri scored again in Friday's match in Qatar but did not make the two-handed gesture on this occasion.

Serbia are already being investigated by FIFA after the team hung a controversial flag in their changing room before they lost to Brazil at this World Cup.

The Kosovo football federation filed a complaint with the world governing body after photos showed a version of the Serbian flag with a map that depicted Kosovo as part of the country and included the slogan “there will be no surrender”.-AFP 2.Thailand Masters: Tze Yong, June Wei sail into next round