FexEx grilled on cost-cut plan of up to US$2.7b after profit slide 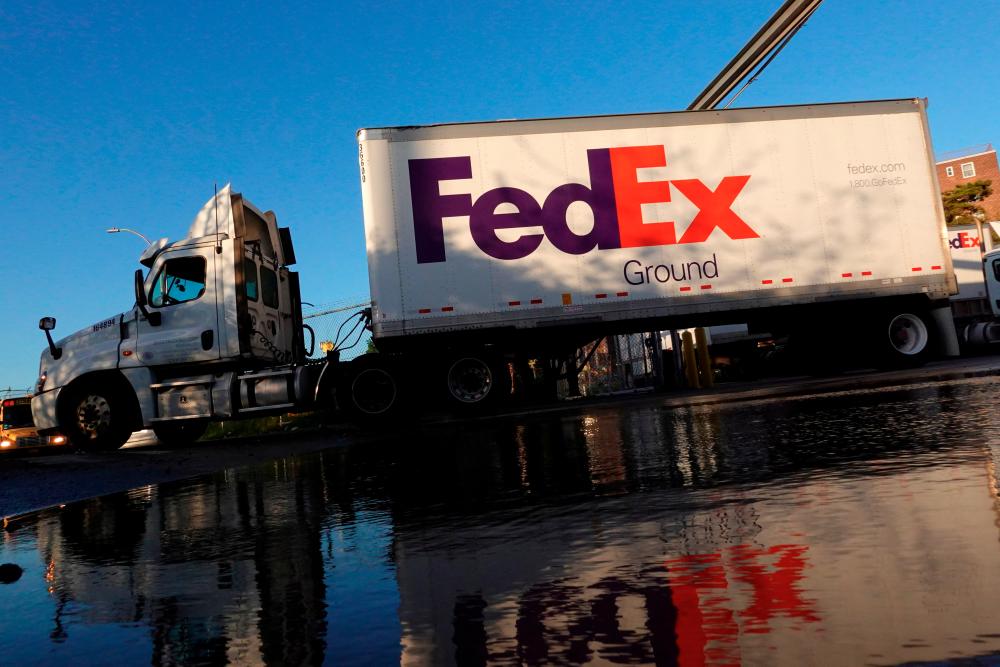 LOS ANGELES: FedEx Corp outlined cost cuts of up to US$2.7 billion (RM12.33 billion) after falling demand hammered first-quarter profit, but analysts grilled company executives with questions in an earnings call about whether steps such as parking planes and shuttering some offices were too little too late.

The company reported that earnings per share fell 21.3% for the quarter ended Aug 31, in line with the warning it delivered last week. It blamed a rapidly deteriorating global economy and the CFO later said he expects the weak trends to persist across most regions for the rest of the current fiscal year.

Analysts and investors were sceptical – in large part because revenue increased 5.5%. On the conference call, analysts asked FedEx executives pointed questions such as whether they had the right team in place to set the company on the right path. One asked why FedEx was underperforming rival United Parcel Service with its more costly unionised workforce.

FedEx committed to repurchasing US$1.5 billion of its common stock this fiscal year, including US$1 billion in the current quarter, even as the company confirmed investors’ and analysts’ suspicion that it did not cut costs fast enough to offset the hit to demand.

“The impact of cost actions lagged volume declines and operating expenses remained high relative to demand,” FedEx said in a release detailing its plans to cut costs by US$2.2 billion to US$2.7 billion in fiscal 2023.

“Getting cost out rapidly is my priority. We want to get out ahead of this,” said chief executive Raj Subramaniam, who was promoted lead the company in June. He assured analysts that he is confident in his team and its experience.

FedEx said it booked US$300 million in first-quarter savings and plans to slash expenses by US$700 million in the current second quarter. Executives said most of that is coming from reducing the frequency of FedEx Express flights and parking the equivalent of eight aircraft.

On the revenue side, FedEx announced plans to raise average rates by 6.9% starting on Jan 2. Executives defended the action, even as analysts questioned the wisdom of pushing through its biggest-ever increase when demand is cooling. “I am confident the cost actions we’re implementing with urgency will enhance efficiency and drive improved profitability in support of our long-term financial targets,“ FedEx chief financial officer Michael Lenz said.

Still, Lenz said the company expects weak trends “will persist across our major geographies” and will be “driving our cost takeout initiative for the fiscal year”.

Last week, the Memphis-Tennessee-based company said adjusted earnings per share for the quarter ended Aug 31 fell to US$3.44 from US$4.37 a year earlier, even though revenue rose to US$23.2 billion from US$22 billion. It also pulled its full-year forecast, blaming macroeconomic weakness in Asia, service challenges in Europe and soft revenue in its US Ground delivery unit. It reiterated those results in a regulatory filing that landed hours earlier than expected due to a technical issue.

“They sound a lot more confident today that they’ve got a plan in place. They’re able to quantify the plan,” said David Katz, chief investment officer at Matrix Asset Advisors in White Plains, New York, which holds about 58,000 FedEx shares.

“They’re still not giving guidance for the year. However, they definitely are giving a lot more detail in terms of the plan,” Katz said.

With the share repurchase announcement, FedEx threw a bone to frustrated investors, who have been waiting for a turnaround.

“If the wheels were truly falling off or they did not have confidence that their plan was going to work, they might suspend the share buy back,” investor Katz said.

“They’ve got a lot to overcome, but at least it’s a start,” said Gary Bradshaw, a portfolio manager with Hodges Capital Management in Dallas, which owns FedEx shares. – Reuters