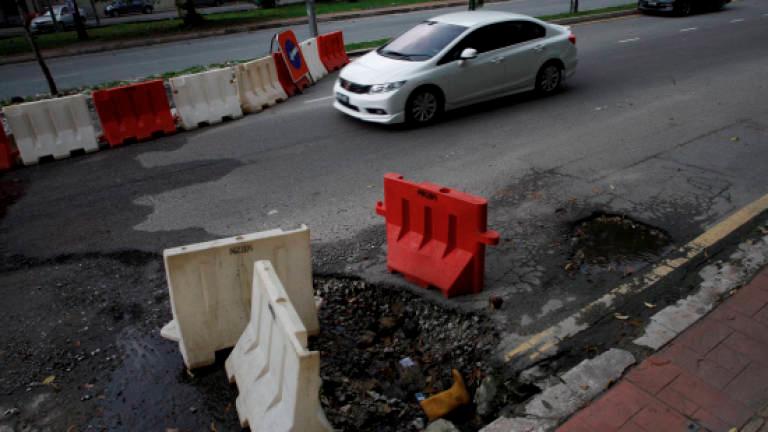 Potholes are the cause of yet another death.

PETALING JAYA : All it took was a small pothole, caused by a depression in the road in Mutiara Damansara, and a Grabfood rider paid dearly with his life yesterday.

The 31-year-old victim, identified as Hew Yoong Le from Kampung Chempaka, was riding his motorcycle on Jalan PJU7/2, near the Curve shopping centre, when the accident occurred at about 1.15pm.

Petaling Jaya police chief ACP Nik Ezanee Mohd Faisal said the motorcyclist was approaching a traffic light when he rode into the pothole before losing control of his motorcycle and crashing.

He said the victim was pronounced dead by paramedics at the scene, and his body was sent to Universiti Malaya Medical Centre for post-mortem.

From videos of the accident taken by passers-by and shared on social media, the victim appeared to have suffered serious head injuries.

In one video, an unidentified motorcyclist said that it was not the first time a biker had crashed his motorcycle at the spot, but this was the first fatal accident.

He urged authorities to fix potholes, adding that motorcyclists are not “seeking clean roads but evenly-built roads”.

The perils of potholes is a deadly risk faced by motorcyclists who ply the roads, especially in the Klang Valley. Pothole-related accidents have been aplenty over the years, causing death, injury and damage to vehicles.

While the authorities concerned had appeared to be indifferent to such cases in the past, it played a different tune recently when Science, Technology and Innovation Minister Khairy Jamaluddin fell off his bicycle and suffered light injuries while cycling on Jalan Kampung Sri Cheeding in Banting on Dec 27 last year.

Soon after the incident, the Kuala Langat district Public Works Department (PWD) apologised to the minister and assured him of action to address the road defect.

There was a furore by netizens who were appalled, and questioned PWD for its silence and turning a blind eye to past accidents involving regular road users.

Khairy had proposed that a website be created to enable road users to report potholes.