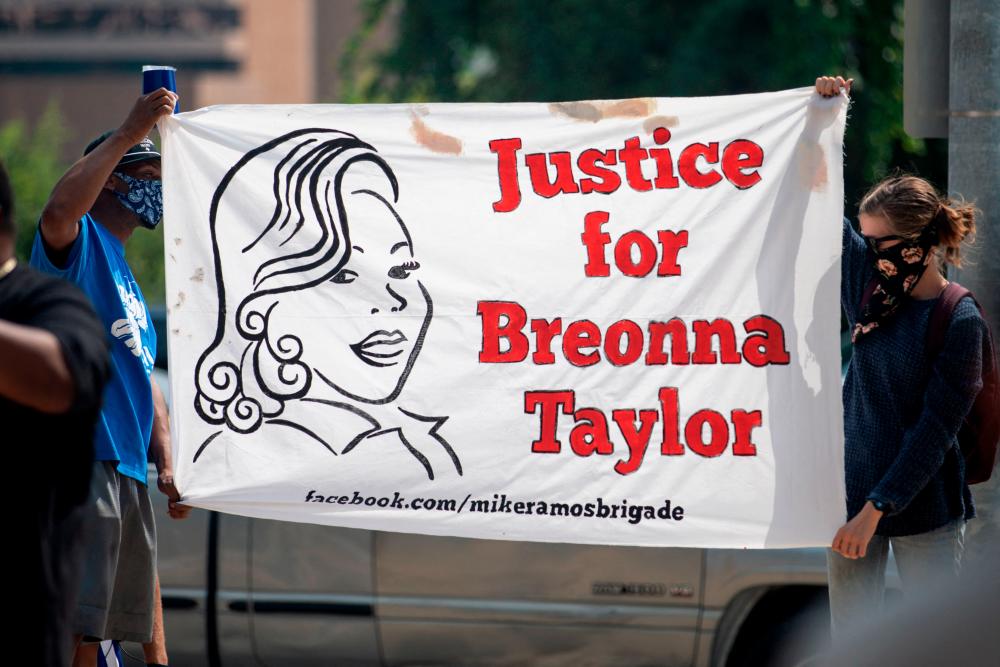 (FILES) In this file photo taken on September 19, 2020 community members gathered for a Stand 4 Breonna event to demand justice for Breonna Taylor in Austin, Texas. AFPPIX

WASHINGTON: The US Justice Department charged four police officers on Thursday over the death of Breonna Taylor, a Black woman killed in a botched 2020 raid on her home in Louisville, Kentucky.

“We allege that these offenses resulted in Miss Taylor’s death,“ Garland said. “Breonna Taylor should be alive today.”

The deaths of Taylor and George Floyd, a 46-year-old Black man who was murdered by a white police officer in Minneapolis in May 2020, became the focus of a wave of mass protests in the United States and beyond against racial injustice and police brutality.

The 26-year-old Taylor and her boyfriend, Kenneth Walker, were sleeping in her apartment around midnight on March 13, 2020 when they heard a noise at the door.

Walker, believing it was a break-in, fired his gun, wounding one police officer.

Police, who had obtained a controversial no-knock warrant to make a drug arrest, fired more than 30 shots back, mortally wounding Taylor.

Garland said three of the Louisville police officers -- Joshua Jaynes, 45, Kyle Meany, 35, and Kelly Goodlett -- were involved in the falsification of a search warrant in a drug trafficking case against Taylor’s ex-boyfriend.

They are accused of violating Taylor’s rights by seeking a warrant to search her home when they knew they lacked probable cause.

“We allege that the defendants knew that the affidavit in support of that warrant contained false and misleading information and that it omitted material information,“ Garland said.

He added that the officers also allegedly “took steps to cover up their unlawful conduct after Miss Taylor was killed.”

The fourth police officer, Brett Hankison, was charged with using excessive force by opening fire wildly during the raid which left Taylor dead.

The 46-year-old Hankison had previously been found not guilty in March of this year of state charges of “wanton endangerment” for his actions during the raid on Taylor’s home.

Taylor’s boyfriend Walker said police battered down the door unannounced. The officers insisted they had identified themselves.

Two of the officers involved were fired but Hankison had been the only one to face state charges -- which related not to the death of Taylor but to endangering residents of neighboring apartments.

“Today was a huge step toward justice,“ Crump said in a statement.

He said he hopes it “sends a message to all other involved officers that it is time to stop covering up and time to accept responsibility for their roles in causing the death of an innocent, beautiful young Black woman.”

“Because of Breonna Taylor, we can say this is a day that Black women saw equal justice in the United States of America,“ Crump went on to say during a press conference with family members.

The city of Louisville, the largest in Kentucky, settled a wrongful death suit with Taylor’s family for $12 million in September 2020.

The Justice Department said violation of a person’s constitutional rights carries a maximum sentence of life imprisonment when it results in death or involves an attempt to kill.

Obstruction carries a maximum sentence of 20 years while conspiracy and making false statements are punishable by up to five years in prison. - AFP