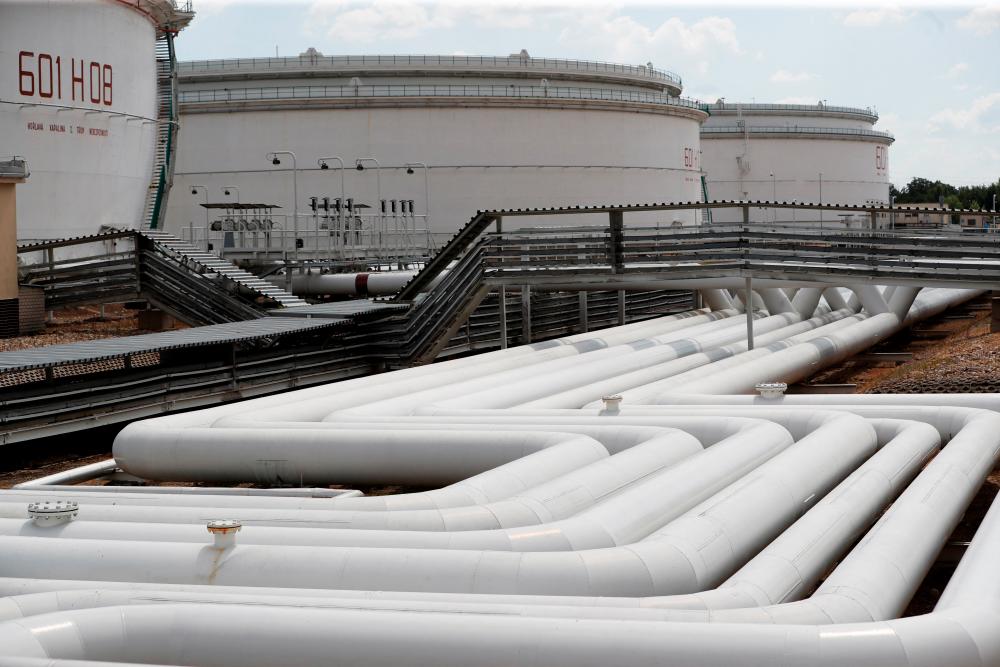 A view of storage tanks at the Mero central oil tank farm, which moves crude through the Druzhba oil pipeline, near Nelahozeves, Czech Republic, on Aug 10. – Reuterspix

HOUSTON/LONDON/SINGAPORE: Physical oil prices around the world have begun to sag alongside futures, reflecting less alarm over Russian-led supply disruptions along with heightened worries about a possible global economic slowdown.

“The market is very bearish at this moment. No one is in a hurry to buy,” a Singapore-based trader said.

Prices rose in the spring on fears Russia’s invasion of Ukraine and Western sanctions would take millions of barrels off the market. That has not occurred, as Russian crude shipments are slightly above levels seen prior to the February invasion.

“The market is coming off hard,” one physical crude trader said.

In West Africa, crude prices have dropped since hitting all-time highs in July. Offers for light, sweet Nigerian oil slipped US$1.50 a barrel and comparable Ghanaian crude by up to US$5 a barrel as European buying eased and refining margins dipped.

Spot premiums for Oman crude hit their lowest level in over a month and Dubai is at its lowest since late May. North Sea Forties also plumbed depths last seen in nearly three months while Azeri BTC crude oil hit levels not seen since the end of last year.

In Asia, spot premiums for US grades have halved with WTI Midland now trading around US$7-US$8 per barrel over Dubai. Cheaper US grades are pressuring locally preferred crudes with Murban trading about US$7.80 above Dubai quotes compared to US$12 above last month.

There are still some scattered indications of strong demand. Refining margins for distillates worldwide remain relatively robust, and there has been eager demand for discounted Russian oil in some Asian markets.

Russian exports as of Aug 9 were 400,000 barrels per day, more than immediately before its Feb 24 invasion of Ukraine, according to JPMorgan data.

“Russian supplies are going to stay around for at least the near future, and the idea of a price super-cycle is now very unlikely,” said a second physical crude trader.

Crude futures hit US$140 in March but have retreated well below US$100 a barrel with US futures around US$92 and Brent around US$97.

US petrol demand is about 5% lower on a four-week average since summer driving season began, based on data from the US Energy Information Administration.

Backwardation – the premium at which futures are traded in later months – for both Brent and US. oil has dropped from record highs in March to its narrowest since April. That implies prompt supply is less tight.

The Brent crude six-month spread has narrowed to US$5.27 a barrel, its lowest since April.

“The super-backwardation is disappearing before our eyes here,” said Robert Yawger, director of energy futures at Mizuho Securities.

“Two things have changed since backwardation was at its steepest: fears that Russian oil would disappear quickly have eased, and confidence about the strength of the global economy has slumped,” he added. 3.US stocks decline again on growing fears of recession