Macron faces a tough fight as France votes on Sunday 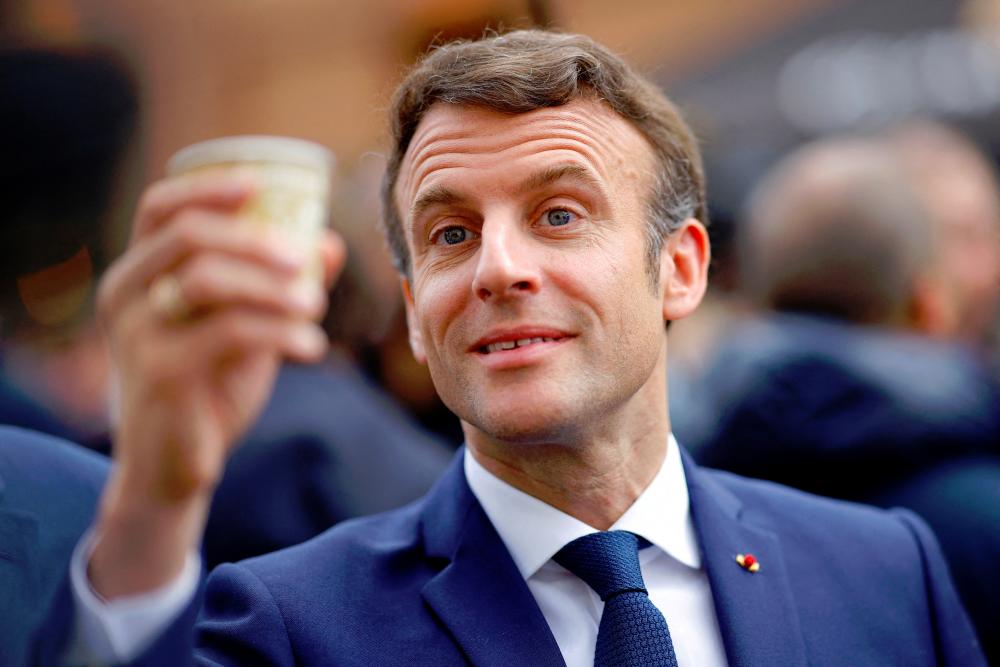 French President Emmanuel Macron, candidate for his re-election in the 2022 French presidential election, cheers with supporters during a campaign trip in Spezet, France. Reuterspix

PARIS: Voting was under way in France on Sunday in the first round of a presidential election, with far-right candidate Marine Le Pen posing an unexpected threat to President Emmanuel Macron’s re-election hopes.

Polling stations opened at 8 a.m. (0600 GMT) and will close at 1800 GMT, when the first exit polls will be published. Such polls are usually very reliable in France.

Until just weeks ago, opinion polls pointed to an easy win for the pro-European Union, centrist Macron, who was boosted by his active diplomacy over Ukraine, a strong economic recovery and the weakness of a fragmented opposition.

But his late entry into the campaign, with only one major rally that even his supporters found underwhelming and his focus on an unpopular plan to increase the retirement age, have dented the president’s ratings, along with a steep rise in inflation.

In contrast, the anti-immigration, eurosceptic far-right Le Pen has toured France confidently, all smiles, her supporters chanting “We will win! We will win!”.

She has been boosted by a months-long focus on cost of living issues and a big drop in support for her rival on the far-right, Eric Zemmour.

Opinion polls still see Macron leading the first round and winning a runoff against Le Pen on April 24, but several surveys now say this is within the margin of error.

In Pontaumur, a village in central France, Simone Astier, 88, said had voted for Macron but without real conviction.

“I am never satisfied because there is always something that’s not right. When I was young it was de Gaulle and for me no one has ever replaced him,“ she said, referring to French post-war president Charles de Gaulle.

In Sevres, just outside Paris, 62-year-old Gnagne N’dry said he had voted for Jean-Luc Melenchon, attracted by the radical left-winger’s plans to raise the minimum wage, lower the retirement age and freeze petrol prices.

“His ideas are right for me, I am a taxi driver,“ he said. “With him, I’d already be retired.”

Melenchon has been running third in opinion polls and his campaign has called on left-wing voters of all stripes to switch to their candidate and send him into the runoff.

In Paris, early voters included Anne Hidalgo, mayor of the capital and socialist presidential candidate who has been lagging far behind the front-runners in opinion polls.

Macron, 44 and in office since 2017, spent the last days of campaigning trying to make the point that Le Pen’s programme has not changed despite efforts to soften her image and that of her National Rally party.

Le Pen rejects allegations of racism and says her policies would benefit all French people, independently of their origins.

Assuming that Macron and Le Pen go through to the runoff, the president faces a problem: many left-wing voters have told pollsters that, unlike in 2017, they would not cast a ballot for Macron in the runoff purely to keep Le Pen out of power.

Macron will need to persuade them to change their minds and vote for him in the second round.

Sunday’s vote will show who the unusually high number of late undecided voters will pick, and whether Le Pen, 53, can exceed opinion poll predictions and come out top in the first round.

Macron and Le Pen agree the outcome is wide open.

“Everything is possible,“ Le Pen told supporters on Thursday, while earlier in the week Macron warned his followers not to discount a Le Pen win.

“Look at what happened with Brexit, and so many other elections: what looked improbable actually happened,“ he said. - Reuters Siblings nabbed for attempting to bribe police with RM25,000: MACC

Siblings nabbed for attempting to bribe police with RM25,000: MACC

5.Siblings nabbed for attempting to bribe police with RM25,000: MACC