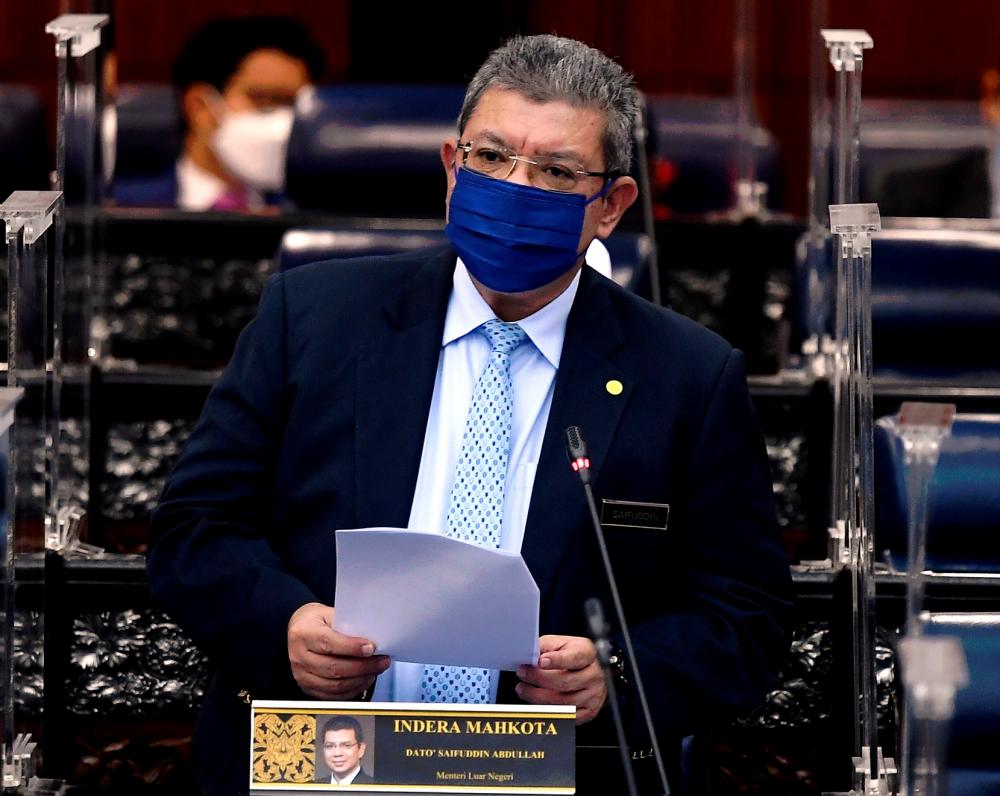 KUANTAN: Malaysia will continue to advocate strongly against human rights violations such as the systemic oppression of the Palestinians and the Rohingyas, besides working together with the international community to rebuild Afghanistan.

Foreign Minister Datuk Saifuddin Abdullah(pix) said this during a press conference after Malaysia on Thursday was elected to the United Nations Human Rights Council (HRC) for the term 2022-2024, in the elections held during the 76th Session of the United Nations General Assembly (UNGA) in New York.

It is a great honour for Malaysia as it received an overwhelming 183 votes and had served twice before in the HRC, from 2006-2009 and 2010-2013, where it worked constructively with all stakeholders in the pursuit of a balanced and nonpoliticised approach to human rights issues.

Earlier in his speech, Saifuddin said as a Council member, Malaysia intended to prioritise the rights of vulnerable groups particularly children, women, the indigenous people, and the elderly.

“Malaysia plans to push for the empowerment of youths to have a bigger role at all levels of decision- making, as well as uphold access to safe, clean, healthy, and sustainable environment as a human right that needs to be protected and promoted,“ he said.

Saifuddin added, Malaysia believed that the role of the HRC is now more vital than ever, especially as the world rebuilds and recovers from the Covid-19 pandemic, to ensure that human rights is kept at the center.

To this end, Malaysia will remain actively engaged with the Council as well as its related processes to find common ground, build back stronger in peaceful coexistence and ensure that no one is left behind, he said.

During its membership, Malaysia plans to prioritise constructive engagement, cooperation, inclusivity, transparency and mutual respect in the HRC.

“As a multi-ethnic, multi-cultural and democratic society, we believe Malaysia will be able to share the values of inclusivity, acceptance and understanding as captured under the Keluarga Malaysia concept,“ he said.

The HRC is a 47-member inter-governmental body within the United Nations system responsible for the promotion and protection of all human rights. It considers all thematic human rights issues, human rights violations and specific situations requiring attention.

“Regarding Afghanistan, my special advisor Datuk Ahmad Azam Ab Rahman will begin a series of visits to countries that have close ties with the administration in Kabul, which is Turkey, Qatar and Pakistan, to discuss more on humanitarian assistance.

“We will also facilitate any NGO that wants to extend assistance to the country,“ he said.

Meanwhile, Saifuddin said Malaysia did not want Myanmar’s junta chief to attend the upcoming ASEAN Summit that will be held from Oct 26 to 28 if no progress was made on Five-Point Consensus.

“I will be attending the online emergency meeting with ASEAN Foreign Ministers this evening, I was made to understand that Myanmar’s Foreign Minister will also be in attendance and the matter expected to be discussed is the Five-Point Consensus.

“ Malaysia’s stand is clear and I will repeat that if there is no significant progress in the implementation of the Five-Point Consensus, the Junta Chief helming the nation should not be invited to the ASEAN Summit,” he said.-Bernama