OBK in Sabah to continue, to protect natural treasures 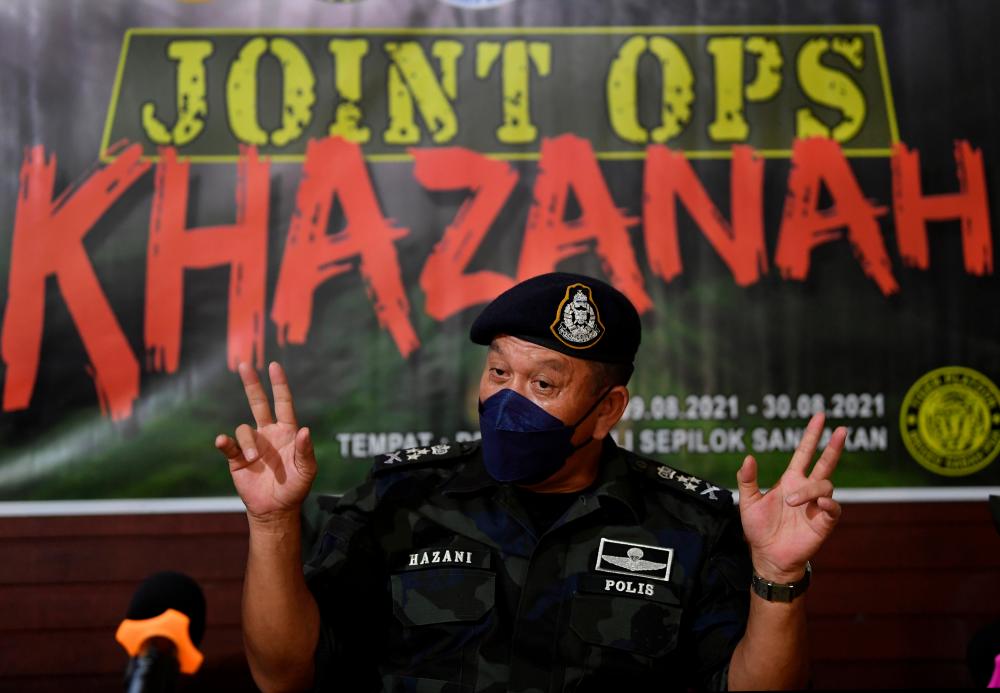 He said the operation, which was supposed to end today after 67 days since it was launched, had garnered positive response from the public following its effectiveness in preventing the exploitation of Sabah's flora and fauna.

“I am supposed to close this operation, but I don’t want to. In fact, I will extend the model of this operation here, to the peninsula and Sarawak because in 67 days, there were 66 cases involving a total of 73 arrests and about RM3.2 million in seizure.

“To me, other than arresting and bringing culprits to court, I want to suggest drastic approaches, including actions to be taken under the Security Offences (Special Measures) Act (SOSMA) and Prevention of Crime Act (POCA) as well as Anti-Money Laundering and Anti-Terrorism Financing Act (AMLA),“ he told reporters after visiting the Sabah OBK operation centre here today.

Hazani said the impact of the crimes was detrimental to the ecology of the forests, which should be inherited by the future generations in its glorious form.

”As these illegal activities bring great profits to the criminals, I am sure there are syndicates involved. That is why we are losing hundreds of millions of ringgit every year due to illegal activities involving our natural treasures,“ he said.

Hazani said the discovery of an illegal gold-mining site in the Ulu Segama-Malua Forest Reserve near Lahad Datu during OBK urged him to suggest to the government to widen the scope of a Wildlife Crime Bureau which was approved by the government in June.

He said the bureau should also focus on related issues involving the forests and its inhabitants, including illegal logging, mining, hunting and exploitation of flora and fauna.

Earlier, Sabah General Operations Force Brigade deputy commander, ACP Toipi Lamat, who is Sabah OBK field commanding officer, said the operation discovered 103 holes dug-up on the ground near Sungai Bole at the Ulu Segama-Malua Forest Reserve, which led to the discovery of a tunnel about 10-17 metres deep where it is believed to contain gold.

He said the area had been active for commercial purposes during the 1990s when it was a Class II Commercial Forest Reserve, but word of mouth among the locals said that illegal miners tend to enter the forest, which prompted the OBK team to check.

“We discovered tents and treehouses and even a basketball court as well as a garden where they had planted food including durian, leading us to believe that the miners have been there for years. But since the OBK was launched in August, we believe the miners left for fear of being captured,“ he said.

Toipi said the site was discovered on Aug 18 and further investigation was carried out on Aug 25-29, at which time the team demolished the miners' site.

Sabah chief conservator of forests Datuk Frederick Kugan said the impact of the mining activity had destroyed most of the trees of riparian species and excavation works could be harmful to the wildlife due to the discovery of holes on the ground and a tunnel that had caused the soil to collapse.

He said the forest reserve had been reclassified as Class I Protection Forest Reserve in 2012 due to the existence of orangutan population.

“Following the mining discovery, enforcement might require assistance from the Department of Minerals and Geoscience as the Forestry Department is limited to enforcing the Sabah Forestry Enactment, which outlines what is illegal in forest reserves such as felling of trees.

“We also need to fine-tune our management plans in terms of action that can be taken by our enforcement team. For example, there are many roads into the forest, which need to be demolished,“ he said.-Bernama