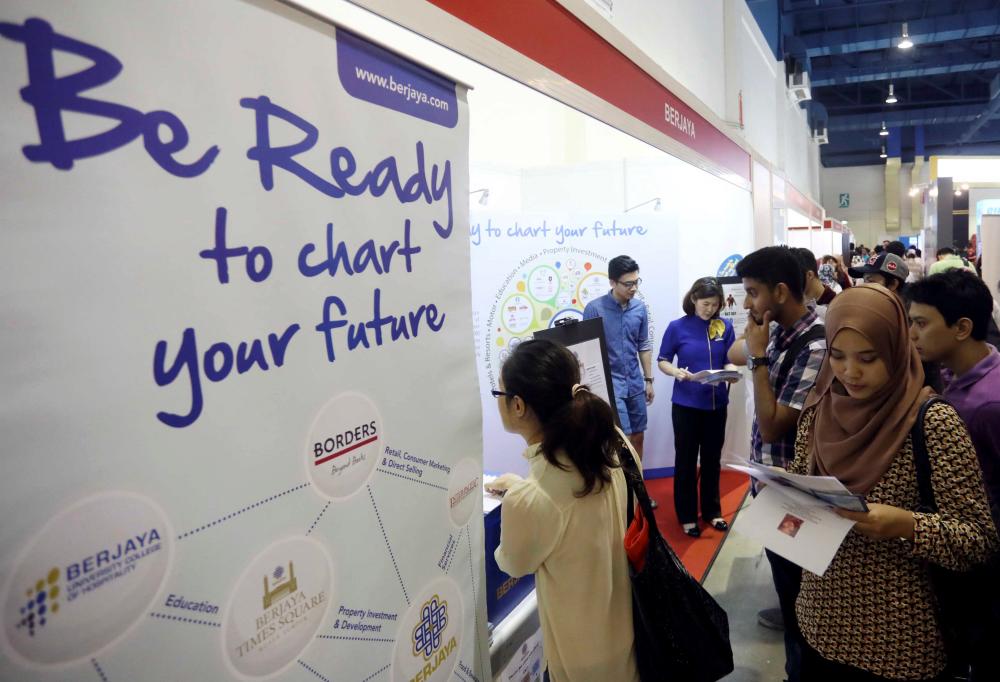 Jobseekers check out vacancies at a career fair in Kuala Lumpur. The limited career opportunities and difficulty in earning a decent living in Malaysia have resulting in many Malaysians seeking greener pasture overseas. – Zulfadhli Zaki/theSun

PETALING JAYA: It is not for lack of love of the country that nearly 1.7 million Malaysians have sought employment aboard.

Citing limited career opportunities and difficulty in earning a decent living, they opted to work outside the country.

Singapore is the most favoured country with 54% of Malaysian diaspora earning their living there, followed by Australia (15%), the United States (10%) and the United Kingdom (5%). Research house Emir Research estimated this talent drain lowers the country’s Gross Domestic Product growth by 2%.

“In New Zealand, there is a better chance of getting a decent job that pays well while also being assured of my rights,” said mechanic Kendrick James, 32, who lives in Taupô. “The minimum wage per hour here is NZ$20 (RM57) compared with a mere RM7 to RM10 back home.

He said the number of financial commitments and rising living costs have it tough to survive on the salary he could make in Malaysia.

“It would be impossible for someone earning a minimum wage to have a proper work-life balance. You would have to pull overtime shifts and have at least an extra job or two if you want to avoid financial strains. That causes mental fatigue and stress,” he added.

An online survey conducted by Reddit Malaysia last August found that a majority of respondents unsatisfied with life in Malaysia would move abroad if they could.

Polling 3,200 people, the survey asked Malaysians in the country as well as those who had moved abroad on their thoughts about the homeland and how life might be different in other parts of the world.

Only 9% of the respondents agreed that they were happy living here in Malaysia and wouldn’t think about leaving, while another 28% said they have thought about immigrating to other countries but would most likely stay.

James, who holds a permanent residence card in New Zealand, is wary of the political turmoil in Malaysia. He said he would have to consider giving up his Malaysian citizenship to ensure a better future for his family.

“I love Malaysia, but the politicking is getting out of hand. Politicians openly play the race and religion card, and many of our voices have been muted. I will not allow my children to endure what my partner and I had,” he said.

However, he is hopeful that the country would be able to break out of the grip of toxic politics.

Cyber security analyst Thevaindran Santhrasegar, 26, left for the same reasons. Now working in Auckland, he has chosen not to renounce his Malaysian citizenship. But if future opportunities and benefits outstrip those in Malaysia, he may reconsider.

“I love my homeland. Malaysia is home to beautiful people and amazing food, but as a minority, we have always been seen as the underdogs. From job opportunities to renting houses, there is so much prejudice towards those of my community,” he said.

Thevaindran also chose to not raise his family in Malaysia. “I believe they have better opportunities here,” he said.

Postgraduate student P. Dheenesh migrated to Birmingham, England not only to pursue greater job opportunities but also to further his studies. Dheenesh, 31, said he received fair treatment, better diversity and inclusion and equal treatment in almost all aspects in a foreign country.

“The cost of living is also relatively lower than in Malaysia.

“I am no expert but I believe it will take at least 10 years before Malaysia can shed the racial differences, cronyism, corruption and be able to offer equal opportunity to all. Till then, I intend to raise my family here.

“I would like them to grow up in a country that offers opportunities to all and rewards hard work and honesty instead of corruption and cronyism.”