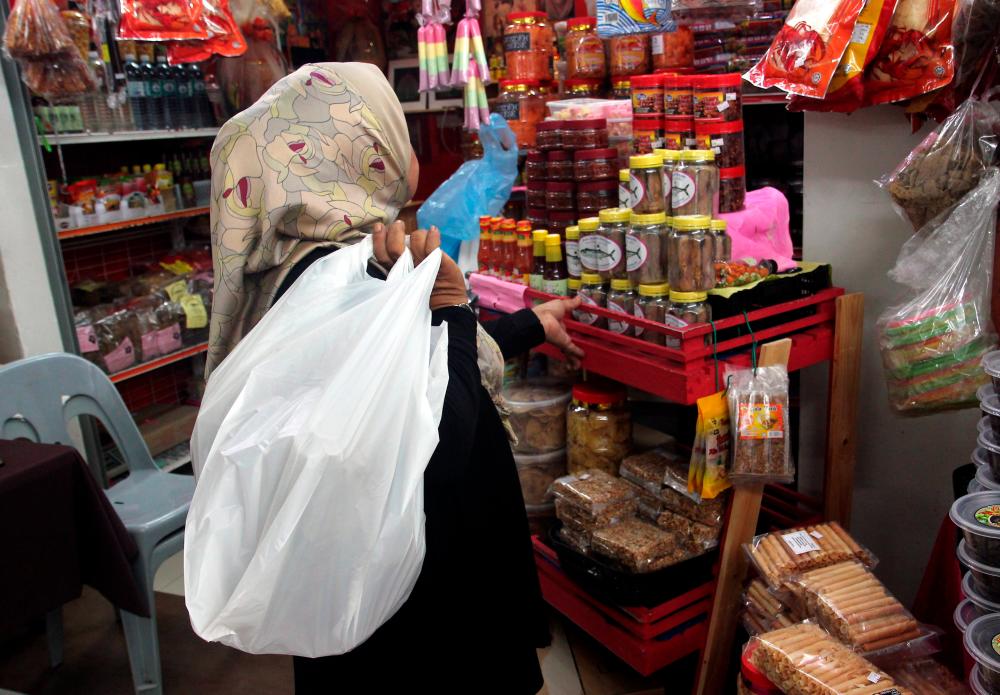 Despite the existence of a no-plastic-bag policy, many retail establishments still freely give it to customers. – BERNAMAPIX

PETALING JAYA: Malaysia’s road to a plastic-free environment seems to be littered with a lack of commitment.

According to an environmentalist, apart from half measures such as charging shoppers 20 sen for a plastic bag at the grocery store, little has been done to keep the country’s Roadmap Towards Zero Single Use Plastics on track. Even the small penalty for failing to bring a shopping bag is not enforced across all retail outlets.

GV Medhini Consultancy and Resources Sdn Bhd founder Dr Praveena Rajendra said based on her observation, some supermarkets and shops continue to give away plastic bags to customers despite the no-plastic-bag policy that was introduced in 2018.

She pointed out that in line with the policy, Malaysia should do away with single-use plastic bags and plastic straws by 2030.

“Based on the (policy) framework, we should no longer be using plastic straws. Yet, they are still being used freely (in coffee shops).”

Praveena said that by 2022, which is a month away, the use of biodegradable bags should replace plastic bags at retail outlets.

“However, we are not even close to achieving this target. The fact is that we are lagging far behind.”

She said the use of plastic bags is still prevalent because of a lack of awareness.

“Plastic bags are still being used at night markets and mini markets,” she told theSun.

“This lack of commitment will not help us achieve our goal.”

Praveena said a holistic approach by both the government and the people is essential to ensure the country successfully eliminates the use of single-use plastic bags.

“There has to be stronger grassroots advocacy. The use of woven bags should gradually gain acceptance as the new practice.”

She said a proposal by some local councils to raise the charges for plastic bags at retail outlets should be seriously considered to curb pollution. She added these steps are the way forward to address the problem of plastic waste in the country.

Malaysians are among the world’s largest consumers of plastic packaging. According to a World Wildlife Fund (WWF) report that was published last year, Malaysia ranked as the top user per capita of plastic packaging among six countries in Asia that were surveyed.

The report said that the average Malaysian used 16.8kg of plastic packaging a year, followed by the Thais, who used 15.5kg. The other countries covered in the survey were China, Indonesia the Philippines and Vietnam.

Praveena said one way of achieving the target is to introduce alternatives to plastics.

“For instance, we can use banana leaves as material for packaging.

“Some people may be hesitant to use such an alternative but it is eco-friendly, and we should keep in mind the long-term benefits of such a change.”

She said the government could also consider drastic measures such as putting a stop to single-use plastics altogether.

“We are survivors. We will find another way to replace plastic packaging,” she added.