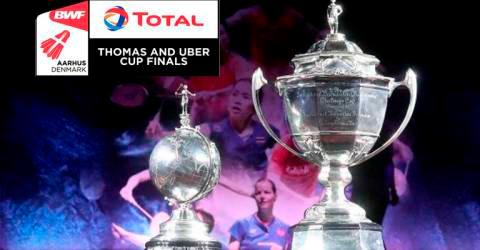 In fact, Rashid said Indonesia actually had to toil to beat Malaysia 3-0 to confirm their semi-final spot.

This, he said, showed that the young national shuttlers, despite their lack of experience playing in such a prestigious championship, gave their rivals a good fight.

“I see our loss not as an easy defeat. (This time) they showed tremendous spirit and fought till the end.

“We know that most of the players are still young and playing in their first Thomas Cup campaign. So, we can’t put high expectations on them to beat Indonesia,” he said when met at the BT Bina Group Sdn Bhd Sports Excellent Awards ceremony here today.

Rashid, who was part of the national squad when Malaysia last lifted the Thomas Cup back in 1992 in Kuala Lumpur, said the young shuttlers' performance in Aarhus had set a positive marker for the next edition of the Thomas Cup.

Indonesia, who have won the Thomas Cup a record 13 times, then clinched the winning point through Jonatan Christie, who defeated Ng Tze Yong 14-21, 21-19, 21-16, to set up an intriguing semi-final clash against Denmark today in a bid to end their trophy drought after last emerging as champions in 2002.

Meanwhile, commenting on the performances of youngsters Tze Yong, 21, and Leong Jun Hao, 22, in Aarhus, Rashid said they both had huge potential.

“They are very talented and have a good fighting spirit. There’s a big possibility they can be among the world’s top 10 players if they really work hard and train diligently,” he said.

At the awards ceremony, national para shuttler Cheah Liek Hou and Rashid, as his coach, were presented with a luxurious condominium by property developer BT Bina Group here following the former’s success in bagging the men’s singles gold medal at the recent 2020 Tokyo Paralympics.

The company also presented an annual sponsorship of RM250,000 to each of them until 2024.-Bernama

Are we financially literate enough?

2.Change your attitude to transform your future

3.Are we financially literate enough?

4.Why your vote is important