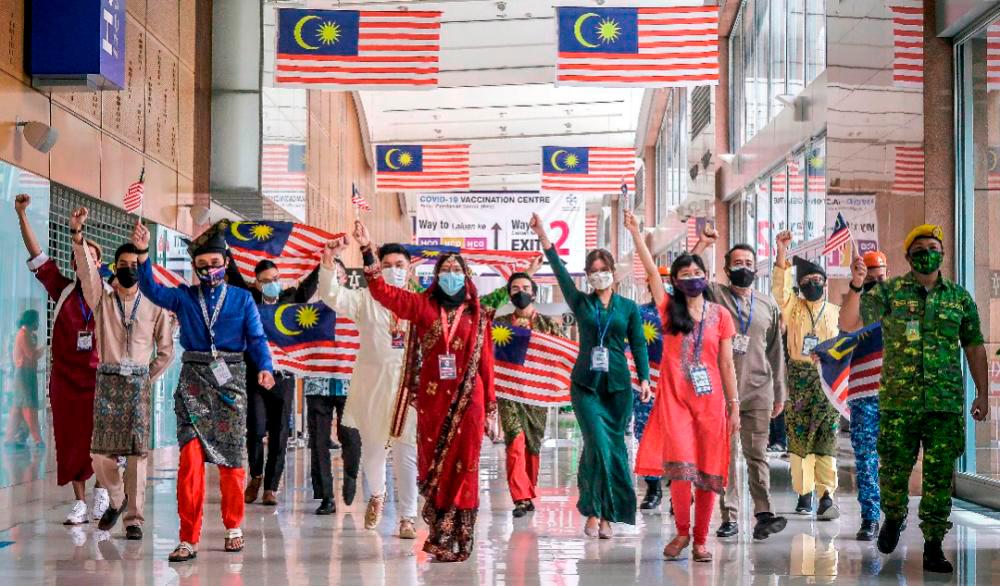 THE “Keluarga Malaysia” concept articulated by Prime Minister Datuk Seri Ismail Sabri Yaakob is meant to further instil and entrench a strong sense of inclusivity, togetherness and belonging for all Malaysians.

The prime minister has definitively tugged at the heartstrings and struck a chord as to what it means to be a Malaysian in a nation and society of diverse ethnicities, religions, cultures and languages.

The term “keluarga” evokes a primordial and one of the most basic of our instincts, namely emotional, psychological, spiritual and physical need; and a desire to be part of a family – the primary and fundamental social expression of what it means to be human.

It is also eminently a classic encapsulation of our Asian values where individualism, conceived particularly as the self (“sovereign” self) above and apart from the society, is frowned upon and looked at in askance.

Thus, our conception and understanding of the individual is unlike the United States, for example, where there is an “antithesis” or opposition between the personal (what is unique to the self) and societal (what is common to all – read: Natural).

By extension, this has resulted in a “perverted” attitude towards the concept of freedom/liberty – whether from the right wing (e.g. anti-vaxxers) or left wing (e.g. the lesbian, gay, bisexual, transgender and queer/LGBTQ movement) of the political and cultural divide in American society – so that non-compliance and non-conformity to society’s norms, values and practices is seen as a basic right and virtue.

In our context, the individual and the society are related as an organic whole,
i.e. the former is simply a member of the wider family, with society comprising all the members thereof.

Diversity is meant to unite, not divide. The common good of society is never separate from the personal good of oneself and vice-versa. Nonetheless, irrespective of our philosophical (and ideological) commitments, whether Eastern or Western, the family is still the fundamental and irreducible construct of human existence and life.

In this regard, it is worth critically assessing the viability of the “Keluarga Malaysia” concept from the viewpoint of parental favouritism in a family unit, as the psychological impact on non-favoured children can be analogous to the impact of preferential treatment based on race and religion in Malaysia.

In particular, the non-favoured child faces the feeling of rejection, that follows him/her into adulthood.

Analogously, decades of affirmative action policies have imparted a similar feeling of discrimination to non-bumiputras that had quickly morphed into deep-seated resentment, and perhaps even visceral hatred.

Clearly, the operationalisation of the affirmative action agenda through the
New Economic Policy (NEP) – announced in 1970 – has benefited some Malays and brought many out of poverty. But many are still marginalised. The poorest groups are still the Malays and many bumiputra-related targets have yet to be achieved.

In parental favouritism, the preferred one is usually the oldest child, the youngest family member or the one with special needs. In Malaysia, the issue is magnified as the analogy appears to be favouring the child with the combined characteristics of a “first-born” (referring to the indigenous Malays), and also the child with “special needs” from the perspective of the (legacy) socio-economic conditions.

Parents usually discuss with all children to make sure it is understood that this is not personal, according to Baton Rouge Parents. Certainly, if policies were clearly focused on helping those who truly need
it, i.e. needs-based policies regardless of ethnicity, people will readily accept this. Instead, this has been perceived to be discriminatory and, therefore, polarising.

As mentioned in EMIR Research article titled “No place for disruptive ethnocentric politics” (April 2, 2021), racism is not supported by Islamic teachings, value-based leadership and even science. Thus, we are left without a satisfying explanation to justify the way racial favouritism has been practised, aside from the historical legacy, which made sense only at that point in time.

For example, mandating a 51% bumiputra stake in freight-forwarding companies has nothing to do with helping poor Malays. The forcing of an outcome, instead of equalising opportunities is unjust.

Going back to the family unit analogy, parental favouritism has arguably failed to help the child most in need. While many bumiputra-related key performance indicators of past Malaysia Plans have not met minimum targets, it has successfully widened the disunity and distrust among ethnic communities (including even between East and West Malaysia). This is antithetical to the concept of “Keluarga Malaysia”.

The exploitation of affirmative action policies has led to patronage politics and discriminatory practices. It has resulted in a serious brain drain problem and other
serious systemic issues plaguing the nation such as corruption.

Utah-based news portal Deseret News referenced Lex Jensen, a psychologist
from Brigham Young University, as stating the following to
the American non-profit
semi-publicly funded media organisation, National Public Radio: “It is not just how you’re treating them; it’s how they perceive it”. Deseret News stated the “perception that a parent favours one child over another often makes children misbehave”, according to a 2014 study published in the Journal of Family Psychology.

Consequently, “misbehaving” takes the form of suspicious siblings conspiring and bickering against one another, while family members who are most in need of aid continue to be neglected and marginalised. And only a select (favoured) few rise to the elite status. The good ones have moved out of the house.

Sadly and lamentably, this is the actual status of “Keluarga Malaysia” as it currently stands. Specifically, the so-called “misbehaviour” is seen in the toxic state of our politics as configured and cast in
ethno-religious terms and character so that this serves as the default “framework” for the competing political parties. Thankfully, not all political parties and bloc/coalition have fallen prey to and are permanently trapped within this paradigm.

Southeast Michigan’s parenting hub, Metro Parent, referenced director of the Cornell Institute for Translational Research on Aging Dr Karl Pillemer, who stated that “the less favoured kids may have ill-will towards their mother or preferred sibling, and being the (favoured) child brings resentment from one’s siblings and the added weight of greater parental expectations”.

Thus, so long as discriminatory and polarising ethno-religious rhetoric is being used to accentuate the trend of divisive identity politics, the term, “Keluarga Malaysia” remains a hollow slogan at the forefront, while institutionalised discrimination remains in force at the background. This is where the responsibility of the people to support a rethinking and reconceptualisation of affirmative action policy begins.

Borrowing from the business analogy, politicians flock to “who pays the piper calls the tune”. If the rakyat is still holding on to their knee-jerk and perfunctory prejudice, bias and stereotyping, whereby policies that are supposed to be a form of assistance/aid are viewed (and abused) as a God-given entitlement, then that is what politicians are going to serve the people with.

Politicians would be compelled to provide equitable policies for all, especially to those in need, regardless of race or religion, if that is what the majority of the rakyat clamour for. This requires a multipronged approach.

Firstly, transformation at the grassroots level, and political will at the very top. Secondly, we would have to go back to revamping what and how to teach in the education system, with concurrent structural reforms and policy rethinking.

Thirdly, the NEP should be discarded as obsolete and having fulfilled its major purpose of eliminating ethnic identification with economic function. In its place should be a new Equitable Shared Prosperity (ESP) – as the exclusive and overriding policy compass, guide and reference, which goes further than the Shared Prosperity Vision/SPV (2030).

In other words, the ESP would be conceptualised as promoting equitable opportunities for all members of “Keluarga Malaysia”, first and foremost.

Only then, would the affirmative action agenda that is based on needs and merits properly serve as the safety net and stopgap (e.g. for those who have fallen through the cracks) – set against the real-world situation, whereby the majority of the poor and underprivileged remain the bumiputras, including in Sabah and Sarawak.

This should be the way, moving forward.

Times are changing, and the new generation has little appreciation for the controversial historical context of ethnic-based affirmative action. The current status of things is proof that past practices have only bred more disunity, resentment and displacement of talent. The outdated mentality of preferential treatment based on ethnic identity has failed.