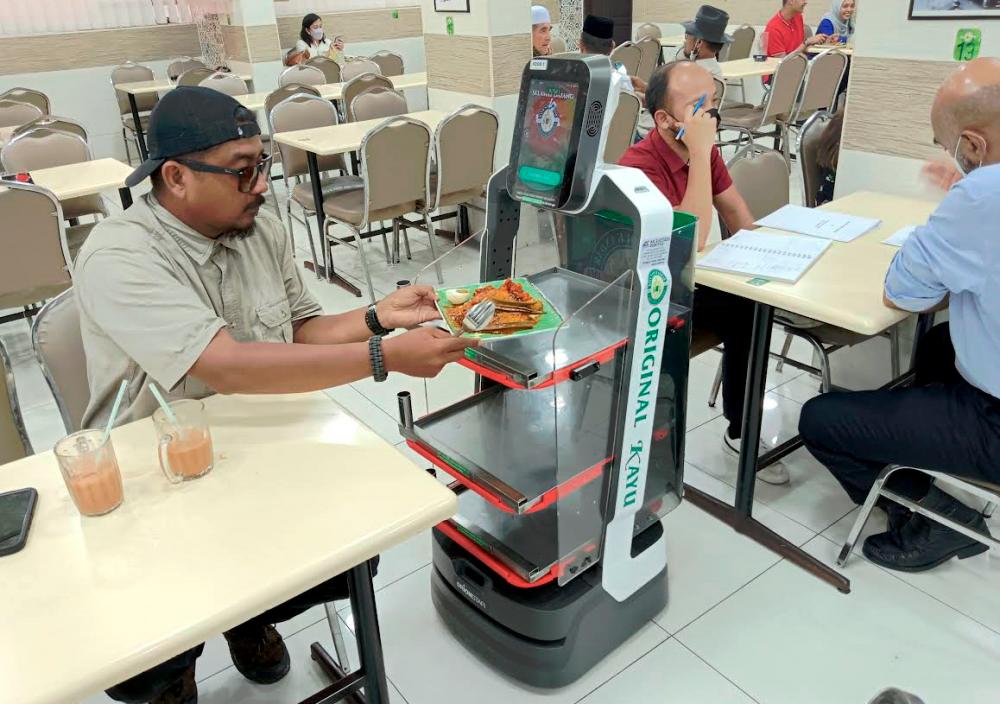 A customer picking up food delivered to him by a robot at a restaurant in Bukit Jambul, Bayan Lepas, Penang. – MASRY CHE ANI/THESUN

PETALING JAYA: While the temporary freeze on applications to hire foreign workers will be lifted starting today as announced by Human Resources Minister Datuk Seri M. Saravanan on Tuesday, the effect of the earlier decision (to freeze hiring) has found an uncanny solution in the form of robot waiters in restaurants.

Called intelligent service robots (ISRs) or smart delivery robots, their users say the machines are here to stay as a feature in restaurants where they serve to lower overhead costs and are affordable to rent and own in the long term.

However, it arranges an instalment scheme where its customers just pay RM1,812 a month for 17 months to own an ISR.

As of this March, there were 250 robotic waiters operating in the country, said Platinum Strength operations director Mohamad Fadzil Che Rus.

He said there are other values in adopting robots in business operations.

“A human waiter’s salary can be as high as RM3,000 due to the difficulty in getting them. But a robot waiter just costs RM1,812 per month to own. It also doesn’t fall sick or demand higher salaries for years of service or experience.

“In a single trip, our robots can serve up to four tables or destination points with four trays of heavy plates, while a human waiter can carry only one.

“The robots can also operate for a minimum of 12 hours on a single charge, which makes them very cost effective.

“Labour issues have long been a sore point in the restaurant sector and have led to falling business revenues.

“The problem cannot be solved even after the Human Resources Ministry lifted the ban on hiring foreign workers because jobs as waiters have little career advancement.

“So robot waiters are the long-term solution,” he said.

Malaysian Indian Restaurant Owners Association (Primas) president J. Suresh concurred with Fadzil’s assessment and said ISRs have helped reduce overhead costs by about 15% due to the need for fewer workers.

“There are about 50 Primas members who are using them in their operations so far, starting from when the Covid-19 pandemic began in 2020, because of a shortage of workers in their restaurants.

“Workers are still needed in restaurants to do other work, such as washing dishes, picking up the banana leaves and dirty plates, and also taking customers’ orders,” he said.

Suresh said while each robot costs over RM1,000 a month in instalments, depending on the company the ISRs are purchased from, maintenance is low as it utilises modern technology, which is among the reasons for operators opting to continue using them.

“The majority of operators have one ISR, but a few have two of them in their restaurants.

“In the next three to five years, we may see these robots in greater use. In time, technological advancements will see newer and more advanced robots working in our restaurants,” he said.

He said Primas hopes the government will undertake a study on the problems faced by restaurants in the country and take proactive steps to assist them.

“We are hoping the government will step in to provide grants or soft loans with low interest so that restaurants can upgrade their premises to accommodate robot technology,” he said.

Suresh said restaurant operators fully support upgrading and using advanced technology, but they need government help to do so.

On what customers think of the robots, Suresh said: “The younger generation, especially the children, love them. Sometimes, there are multiple orders because of the robots coming to deliver the food at the table.

“However, some middle-aged and elderly customers find it cumbersome when food is delivered by robots. They prefer human interaction with the waiters.

“But the world is changing, and we have to adapt or be left behind,” he said. 1.Isa Samad’s appeal against corruption conviction for hearing on March 7 next year

5.Cough syrups linked to deaths of children, not registered in M’sia