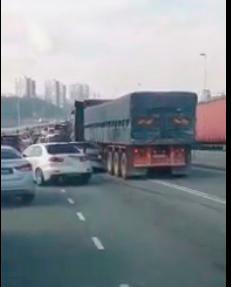 He said investigation on the video, which was viralled on the social media, would be in accordance with the Occupational Safety and Health Industry Code of Practice for Road Transport Activities 2010.

He said stern action would be taken against the lorry driver or the employer involved if there was any breach of rules and regulations.

“This includes suspending the lorry driver’s GDL license, the company’s permit or other punishment as provided in the Road Transport Act 1987 (Act 333),” he said in a posting on his official Facebook.

He urged those who witnessed the incident to submit evidence, such video recordings, to facilitate investigation. 5.Salman Rushdie on ventilator, may lose eye after stabbing attack