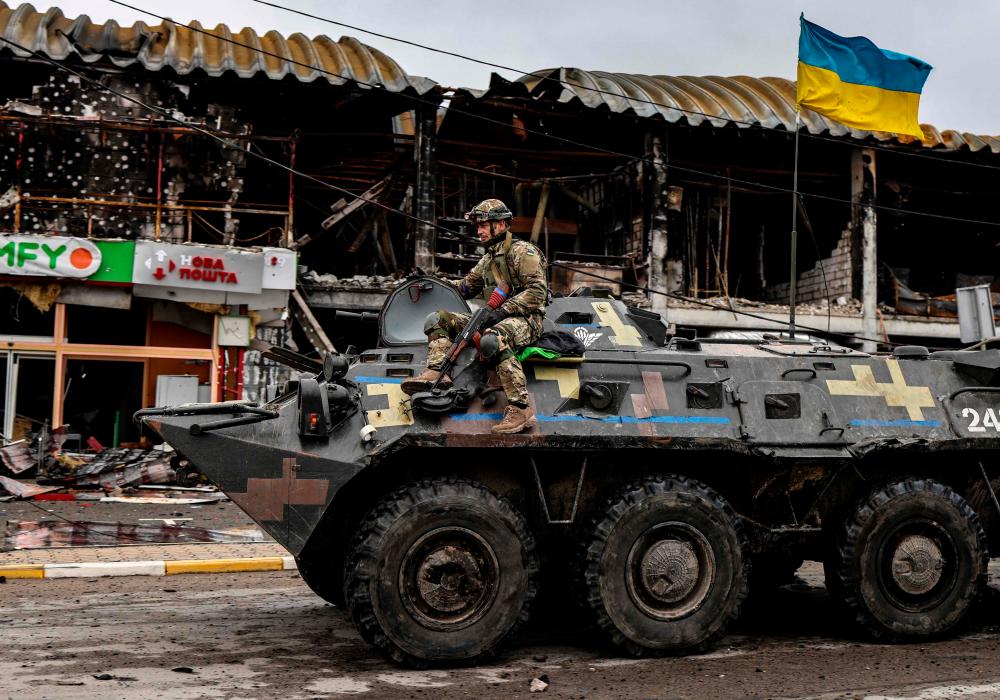 IT has been three months since Russia’s “special operations” into Ukraine started. Most people would have thought that the invasion would be over in a week, and that Ukraine would surrender and Russia would be able to install a
pro-Russian government in Kyiv.

Surprisingly the Ukrainian venture however, could turn out to be another Afghanistan for Russia due to its slow military progress against stiff resistance by the Ukrainians.

Russia’s failure to subdue Ukraine quickly has begun to expose its weakness.

The US and European Nato members are closely watching Russia’s debacle and will be appraising its much lauded and hyped military capability dating back to the Soviet Union days.

China is also surprised by Russia getting bogged down, much like the situation in Afghanistan then.

Equally bewildering is Russia’s strategy as its initial objective was to attack Kyiv and bring down the Zelensky government paving the way for the imposition of a pro-Russian regime.

However, despite tens of kilometres of military build-up comprising tanks and armoured vehicles headed to Kyiv when the war began, the focus then shifted towards Eastern Ukraine due to Ukrainian resistance around Kyiv.

Eastern Ukraine for all practical purposes was in Russia’s pocket as the pro-Russian groups have always ensured that this large chunk of territory was a part of Russia and there was no need to fight for control of this area.

Now, however, one reads about the US reopening its embassy in Kyiv.

There is a surprising aspect about Russia’s military strategy having become topsy-turvy.

The setbacks in Ukraine will have negative effects on Russia in many spheres.

Nato, the US as well as China could begin under-rating Russian military capability despite Russia being a nuclear power with more intercontinental ballistic missiles and their much hyped hypersonic missiles.

Even Russia’s sales of arms and weapons could be affected as many nations could begin casting doubt on its effectiveness and capability.

The longer Russia is bogged down in Ukraine, the more its image in various aspects will suffer, much to the delight of its rivals.

There are already more arms being supplied by the US and its Nato allies to prolong the war and one is surprised that they are not being halted.

Russia needs to stop the infiltration of these arms in its tracks.

President Vladimir Putin knows how much the US supplied heat-seeking stinger missiles to Afghanistan, which led to its loss of aerial superiority and paving the way for a stalemate and finally a withdrawal from Afghanistan.

The same scenario is playing out in the Ukraine with equally devastating effect for the Russians.

Aerial superiority is a deciding factor in a war. Nato would be only be too happy to create a quagmire – an Afghanistan – for Russia in Europe’s own backyard.

Other than the military aspect of the conflict,
the international situation
– only slowly recovering from the pandemic – has been affected by worldwide inflation, price increases, food shortages and disruption of supply lines of essential merchandise.

Prolonging the conflict could benefit and play into Russia’s hands for the short term as the increased oil and energy revenues will offset the damage and loss to the Russian economy by the imposed sanctions, whose real effect is yet to unfold.

The economies of Western Europe and also the US have been severely affected by high energy prices.

However, once the war is ends
– most likely through diplomacy with the latest peace initiative coming from Italy – energy prices will stabilise and the sanctions will begin to hurt Russia.

The longer the conflict is prolonged the more harm it will do to Russia as the West and its allies are imposing new sanctions and boycotts almost on daily basis.

Finland and Sweden have now decided to join Nato, with more negative developments likely for Russia as the war drags on without any effort by any country or leaders or the UN to end it.

It is equally shocking to read from recent reports that Ukrainian intelligence reveals that it can defeat the Russians by the end of the year.

Looking back, the conflict could have been avoided if Ukraine, once part of the Soviet Union, had conceded that it will not join Nato citing Russian security concerns.

However, both Ukraine, Russia and Europeans countries blindly fell into the trap set by the US and its powerful industrial-military lobby.

Now the US has a stranglehold on European Nato members citing the Russian “threat”.

For Russia, some of its erstwhile neutral neighbours want to join Nato to “protect” themselves and Russia will have to increase its military spending to cope with the new collective Nato threat.

For Ukraine, all is lost as the country lies in ruins and rebuilding will take years of effort and billions of dollars.

There are about five million refugees who have fled Ukraine and they need to be brought home.

Looking back again, if only better astute statesmanship was shown by the European, US, Ukraine and Russian leadership this war could have been avoided.