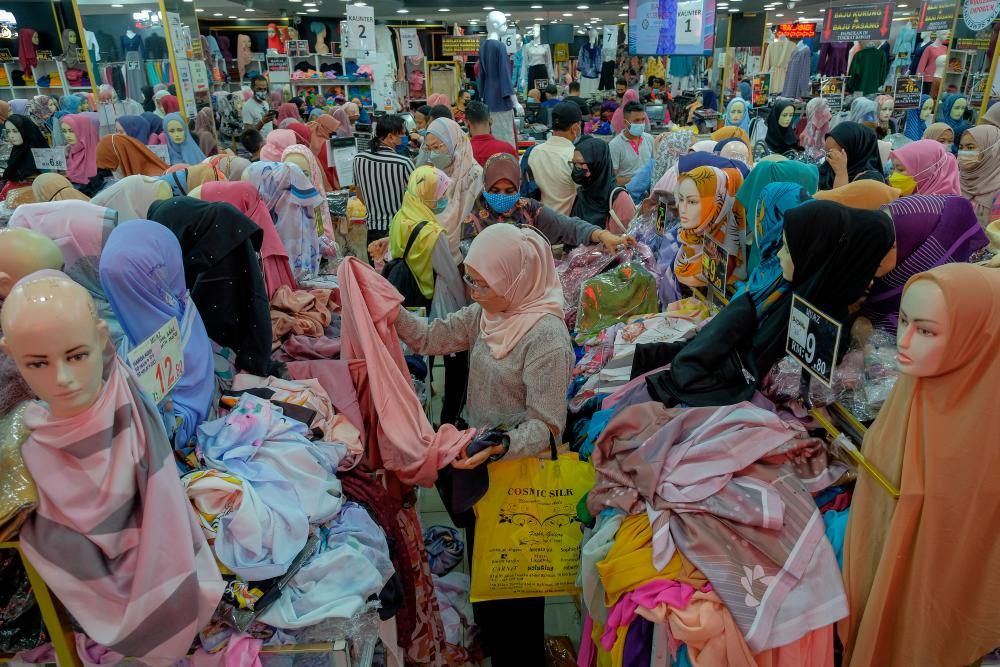 The increase in world oil prices and the conflict between Russia and Ukraine have been seen as the main causes disrupting the supply chain and creating a ripple effect across the global economy, according to the Department of Statistics Malaysia (DOSM).

It said that in March, the country’s consumer price index (CPI) increased moderately by 2.2 per cent to 125.6 from 122.9 in the same month of the preceding year, due to an increase in food inflation.

The CPI is used to examine the weighted average of prices of a basket of consumer goods and services.

Malaysia’s inflation, as measured by the CPI, surpassed the average inflation in the country for the period 2011 to February 2022 of 1.9 per cent, official data showed.

According to Lulu Hypermarket regional director Asif Moidu Ahamed the basket value of consumers decreases when the shopper is cautious in spending and only buys basic necessities rather than buying unnecessary goods.

“We can see consumers’ buying strategy changing. They are now very controlled and buy only necessary groceries or fresh goods such as vegetables, fruits, fish or chicken,” he told Bernama.

He also observed that customers are buying in lesser quantities which would affect retail turnover.

In addition, Asif said the current market scenario, where many international brands are offering price reduction offers to attract customers, proved that customers’ buying trends have changed in value items and they are highly selective in purchasing.

“The issue is further compounded by increasing logistical costs due to the dearer price of oil, which puts pressure on the manufacturing sectors.

“The war has very much affected us in terms of our supply chain, but mainly the higher commodity price adds on to the manufacturing costs of production as well as the cost of the product,” he explained.

Giving his opinion on how to tackle the higher price of consumers’ staples, Sunway University professor of economics Dr Yeah Kim Leng said household consumers would be less affected by the inflation with an increase in wages by five to six per cent.

“The expected time for the price of goods to return to normal is still unpredictable depending on the duration of the Russia-Ukraine conflict as well as the ongoing sanctions on Russia that affect the global supply of key commodities,” he said.

Yeah also proposed that consumers prepare for the rising prices of goods as it is expected to remain elevated for the rest of this year.

“What is important is that we note there will be higher inflation this year,” he said.

In the United States, for example, consumer prices rose by 8.5 per cent in March, slightly higher than expected and at the highest pace since 1981, CNBC reported.

Meanwhile, Yeah urged that the government should ensure there is no shortage of consumer items and the supply chain remains intact to prevent severe escalation of prices of goods.

“It is important to make sure the supply chain remains intact and any pressure resulting from supply and demand can be measured either through subsidies or by expanding supply.

“To ensure supplies are not disrupted, it could help by increasing production through incentives to boost production, for example, allowing the hiring of foreign workers to ensure that farm production continues,” he added.

Commenting on the issue of workforce, Chin said despite consumers cutting down on spending, the sales figures are still positive thanks to the re-opening of borders on April 1.

He, however, said that manpower shortages may affect the ability of small and medium enterprises (SMEs) to ramp up their services.

Chin said this major problem is being faced not only by SMEs but also in other industries such as factories, hotels and supermarkets.

“A large number of foreign workers have gone back to their countries and SMEs have been struggling to fulfil orders due to the lack of foreign labour.

“Most locals are not keen to take up the 3D (Dirty, Dangerous, Difficult) jobs, hence, we are hoping for the foreign workers to come back soon as possible,” he said.

Meanwhile, Yeah proposed that the government facilitate the intake of foreign workers promptly.

“Economic recovery will be stronger because of the support from the increasing production and productivity of SMEs that are affected by the labour shortage,” Yeah noted.

Margins will still be challenging for the rest of 2022

Kenanga Research has reiterated its neutral stance on the consumer sector as margins will still be challenging going into 2022.

It said the top-lines are expected to be robust if not better as the nation moves into the endemic stage starting April 1, with operating hours back to the pre-pandemic stage for certain business activities, benefitting retailers especially.

“The endemic phase will see travel restrictions phased out (including those from overseas) boosting further the hotel, restaurant and cafe channels.

“Demand ahead looks likely to be supported by incoming festivities boosting sales with food and beverage producers up towards full utilisation,” it said in a note.

It said this would be underpinned by the continued expansion in external demand, full upliftment of containment measures, re-opening of international borders, and a further improvement in labour market conditions.