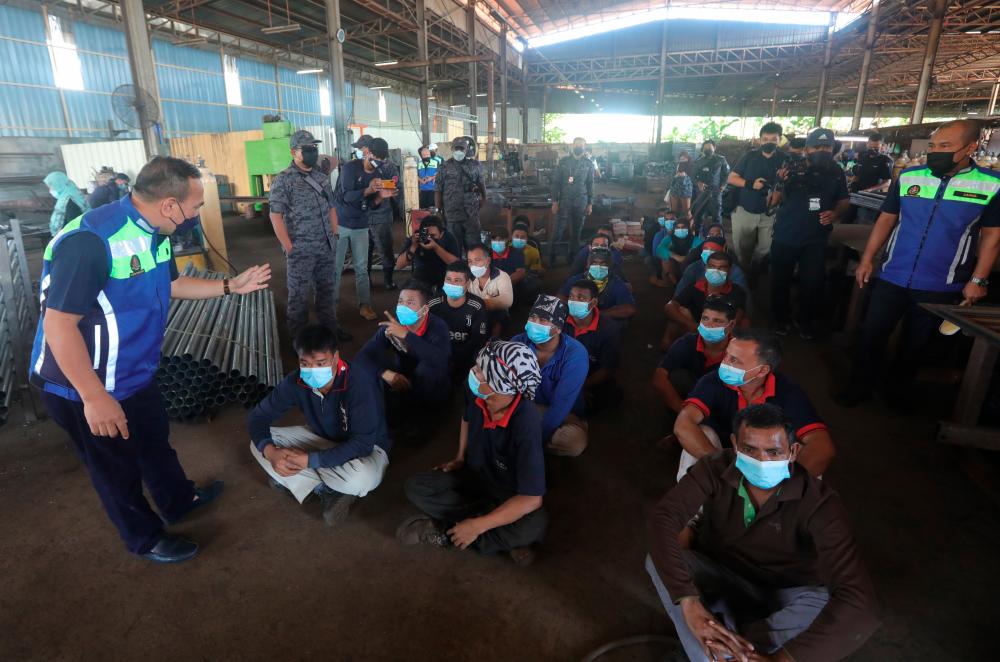 PETALING JAYA: A viral video clip that showed an immigration officer using a large hammer to break down a door during a night raid to round up immigrants has caused much consternation among the public.

The video clip included a woman holding a baby in her arms and a scene in which a man was caught attempting to flee the authorities.

One must acknowledge that immigration officers have to check on migrants, undocumented persons and refugees, as it is incumbent upon them to carry out their duties in the interest of national safety and security.

However, doing so with a sense of humanity will endear themselves to the public and immigrant-based NGO, instead of further frightening those who have already been through the trauma of fleeing their native lands for various reasons, including persecution.

Commenting on the two-minute forty-six-second video clip on the night raid, Migrant Care coordinator Alex Ong stressed that tackling migrant issues with a sense of humanity is critical.

“A holistic approach and change in government policy are needed because continual efforts to run them down is futile,” he told theSun.

He said the long-standing issue is that Malaysia is not a party to the 1951 Convention Relating to the Status of Refugees and its 1967 Protocol, in addition to human rights abuses, which include not having access to education and basic facilities such as a home, electricity and water.

“Apart from the government, NGO also need to mobilise themselves at the grassroots level to teach them their rights,” he said, adding that a pragmatic approach is urgently required on migrant-related issues.

“It’s time to find a mutual point instead of escalating the issue further. There’s no point in blaming each other,” he said, adding that raids, such as depicted in the video, are common and done in the wee hours.

“In tracking down and arresting undocumented persons, the officers must be clear to note if they are irregular migrants, refugees, or asylum-seekers, most of whom have been forcibly displaced.

“Engagement with stakeholders must be done with a sense of humanitarianism as this could happen to us,” he said.

Similarly, the officers cannot be blamed for carrying out their duties, he said. “We can’t blame them for doing their job. But we must differentiate between migrants, undocumented persons and refugees.”

Ong pointed to reports of the overall cost of detaining a person in detention centres, which is estimated to be RM100 per person per day, stressing that members of Parliament need to include this in their discussion with stakeholders as it pertains to taxpayers.

He proposed that a Royal Commission of Inquiry be formed to study and suggest improvements in the conduct of raids. “The fact is that we do not have a law that protects migrants and asylum-seekers.”

He said the quality of public servants, which in this case are immigration officers, needs to be improved.

“They represent us as Malaysians and they are part of the government. They need to be humane. Manners should not be sidelined,” he said, adding that the authorities should be clear as to why a person is being arrested.

He said having a specific Malaysian law that identifies and defines the different classes of migrants in the country will be an extension of the Federal Constitution to provide care for everyone.

“Once the law is introduced, Malaysia has the inherent duty of care to provide accessibilities that include registration of births and deaths for persons without proper documentation,” he said.

In tracking down and arresting undocumented persons, immigration officers must be clear to note if they are irregular migrants, refugees, or asylum-seekers, says Ong. – MASRY CHE ANI/THESUN (pix not related to the viral video clip)