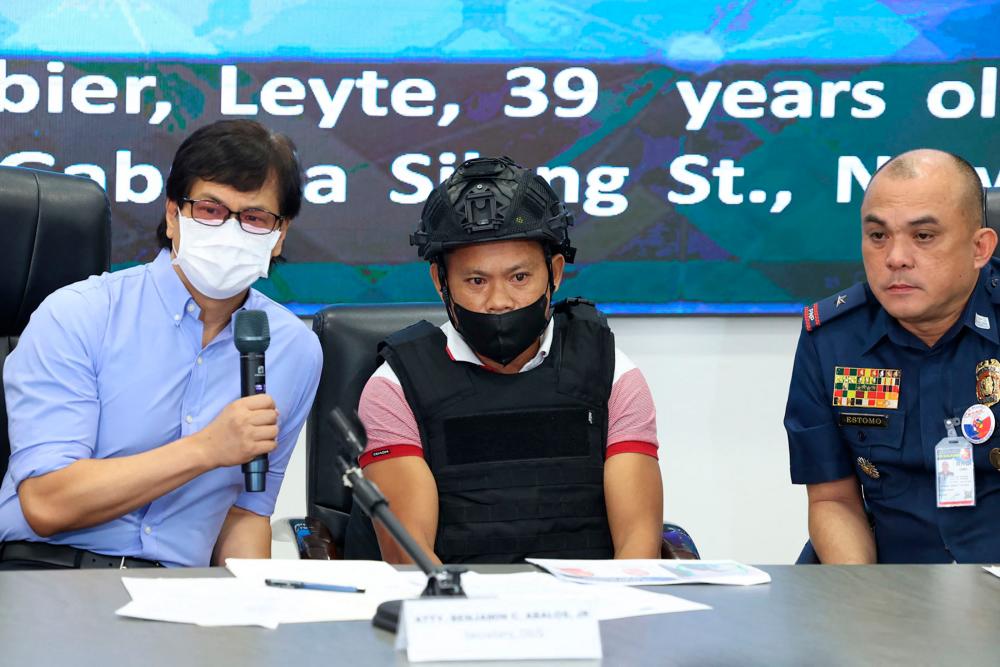 Joel Estorial (C), the alleged gunman in the killing of Philippine journalist Percival Mabasa, is presented to the media as Philippine Interior Secretary Benjamin Abalos (L) speaks during a press conference at the national police headquarters in Manila on October 18, 2022/AFPPix

MANILA: A suspect who had allegedly gunned down a Philippine journalist surrendered to authorities, the interior secretary said Tuesday, calling it a “major breakthrough” in a case that drew international concern.

The archipelago nation is one of the most dangerous places in the world for journalists, and most of the killers often go unpunished.

Radio personality Percival Mabasa, who went by the name “Percy Lapid” in his programme, was shot dead in a Manila suburb on October 3 as he drove to his studio.

He was the second journalist to be killed since President Ferdinand Marcos Jr. took office on June 30.

Mabasa was an outspoken critic of former president Rodrigo Duterte, as well as of Marcos' policies and aides.

Interior Secretary Benjamin Abalos said the suspect, Joel Estorial, had surrendered and turned in a gun Monday “out of fear for (his) personal safety” as police had broadcast his face from security footage taken shortly after the shooting.

“The gun matched the slug (from the crime scene). The ballistics matched,“ Abalos told reporters, calling the surrender a “major breakthrough”.

Police briefly wheeled the suspect, in a bullet-proof vest and kevlar helmet, out to the media but gave few details about his background.

He told reporters he and three others took part in the ambush on orders from an unnamed person at the country's national prison, and later split the 550,000 peso ($9,350) bounty among themselves.

Estorial -- who named his three other co-conspirators still at large -- also said he was told he would be killed if he didn't go through with the attack.

He did not cite the motive nor identified the mastermind behind the killing.

Mabasa's relatives welcomed the arrest but stressed the authorities needed to do more.

“We hope this development leads to the identification, arrest and prosecution of the mastermind,“ the victim’s brother Roy Mabasa said in a statement.

“We hope Percy does not become part of the statistics.”

The National Union of Journalists of the Philippines said holding the mastermind accountable “will help chip away at the culture of impunity around journalist killings” in the country.

A total of 155 journalists and media workers have been killed in the Philippines since 1992, according to international media watchdog Committee to Protect Journalists.

This is more than seven percent of the 2,175 media workers killings worldwide during the period, making the Philippines among the most dangerous countries in the world for journalists in recent years.-AFP ‘We’re on this journey together’, Pele tells national team 4.‘We’re on this journey together’, Pele tells national team

5.Bento proud of S. Koreans, but steps down after defeat