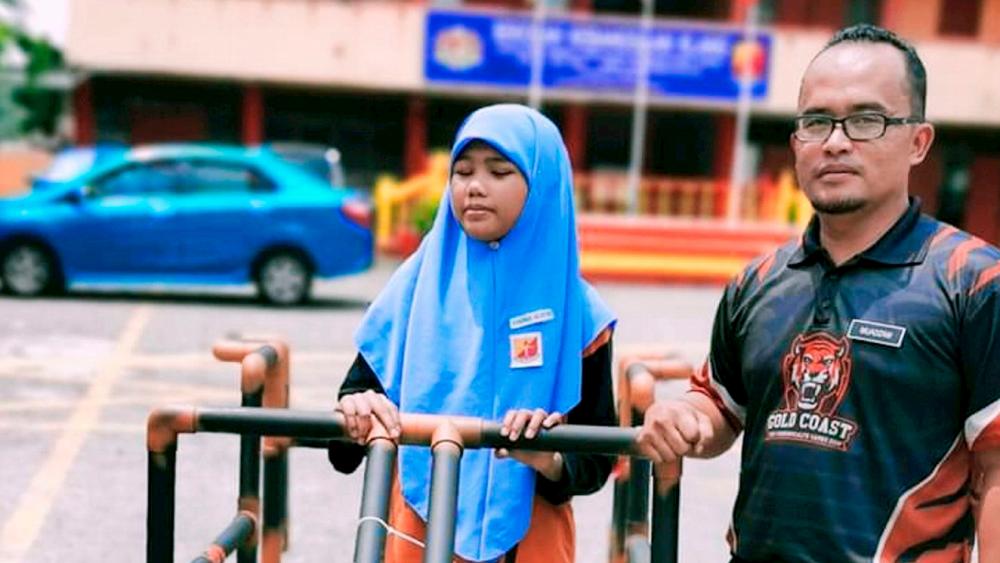 KUALA LUMPUR: A teacher of Sekolah Kebangsaan Klang has invented a running aid that will allow his visually-impaired students to participate in athletics on their own without assistance.

Wan Muadzam Wan Abidin, 40, has named the invention 'Caballus Rafvi’ which serves as a support equipment to help them in terms of navigation, mobility and stability while running.

For the special education teacher, there is nothing that makes him happier than seeing his students’ happy faces because they can run confidently and freely without another person to guide them.

“The idea came from my own experience. During training session, I have to run with them. If there are three students, then I have to do three rounds of running. At this age, it’s hard for me to keep up with them,“ he told Bernama.

Cikgu Azam, as he is affectionately known, said the design of the tool was a combination of a trolley and a baby stroller.

“It is large in size and can accommodate two students at a time. It is not only for the visually impaired but also works for students with physical problems such as uneven legs because this device helps them run with the help of a guide who controls it,” he said.

“I built it myself in four days using recycled PVC pipes, but it was not suitable for long-distance running,“ he said.

Early last year, together with several other teachers, he decided to develop Caballus Rafvi 2.0 which uses a mixture of PVC and iron pipes and is equipped with air tyres that are more stable.

“The cost was RM700 and it was completed within a month,“ said Wan Muadzam, who has been teaching since 2009.

The invention has fulfilled the dream of one of his students, Nur Yusrina Alisya Yusri, 12, to run by herself when participating in the Education Fun Run held in conjunction with Shah Alam Car Free Day at Dataran Kemerdekaan Shah Alam in Feb 2020.

Wan Muadzam also shared the video of the event on TikTok and it went viral on social media.

He said the invention had won a gold medal at the Research and Innovation in Education 2020 e-Seminar (e-SPeDIP2020) organised by the Sarawak Institute of Teacher Education (IPG).

“This is my gift to them. Currently, I am in the process of developing Caballus Rafvi 3.0 to improve its features and quality so that it is smoother, stronger and more portable,” he said.

Meanwhile, Nur Yusrina Alisya thanked Wan Muadzam for fulfilling the dreams of students with special needs to run safely without fear of getting hurt. -Bernama

Kimmich out until January

Luno Malaysia to bring in more cryptocurrencies next year

3.Luno Malaysia to bring in more cryptocurrencies next year

4.Ceiling price is to control prices of goods