Too fast for his peers 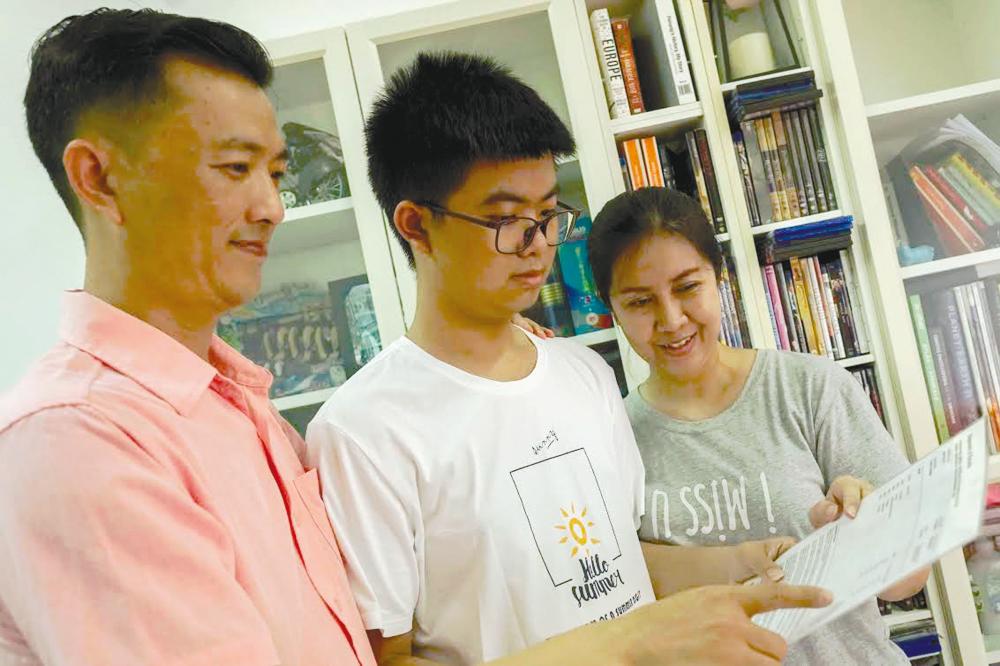 Kai Jie going through his IGCSE results with his parents. – AMIRUL SYAFIQ/THESUN

PETALING JAYA: It took just three months into his public secondary school life in 2019 for Oon Kai Jie to realise the education system was too slow for his liking.

Being a quick learner, Kai Jie, then aged 13, found it hard being held back by his classmates. He spoke to his father Oon Kiow See and both agreed that he should quit school and begin home-schooling.

Kiow See said he had consulted the headmaster of a tuition centre before agreeing to have his son work on taking the IGCSE rather than
the SPM.

“I understand that my son is a fast learner. He excels in all subjects,” Kiow See told theSun.

Just a year of home-schooling was enough to convince the headmaster of the tuition centre that Kai Jie was extraordinary. To Kiow See, he described Kai Jie as “brilliant” and faster than a normal student.

But even home-schooling seemed too slow for him, for in March 2020, Kai Jie asked to jump from Year Eight to Year 11 just four months before the IGCSE exams.

His father was shocked. “He hadn’t even finished the Year Eight syllabus, but I started to make inquiries with international schools that would take him and allow him to prepare for the final exams,” Kiow See said.

However, none were forthcoming, so Kiow See hired a private tutor to coach his son.

“For a start, he worked on three papers – Malay Language, English and Math. In just three months, he took the exams and scored two A* and an A,” Kiow See said.

Kai Jie had covered in three months what an average student would have taken three and a half years to complete.

He did it all when the country was put under movement control order to curb the spread of Covid-19.

“This is a feat that not everyone can achieve and I am proud of my son,” he added.

According to experts, Kai Jie’s achievements are normal for those with a photographic memory or an ability to solve complex puzzles.

Dr Joel Low of Mind Psychological Services and Training said anyone with the right aptitude and personality and is in his area of interest, can be considered a fast learner. “But to be truly gifted in a particular area is not possible through learning alone. It’s a gift,” he told theSun.

“It would be interesting to study him to find out where his brilliance comes from,” Low added.

However, he also stressed that there is a need to be vigilant about the psychological and emotional well-being of these “gifted” individuals.

“Oftentimes, their brilliance is celebrated, and rightly so, but in doing so, it’s not uncommon for those around them to forget that these are young people, in some cases, children, who are brilliant in their own right in their cognitive or practical abilities, but are children
or teenagers in every other psychological and emotional aspect.”

Low said there have been cases where extremely bright individuals who would excel academically or occupationally, but suffer in terms of their ability to adapt to their surroundings and the attention that they are getting.

“Human history is littered with stories like this, and even in Malaysia, there have been documented cases of individuals with elevated levels of ability who suffer psychologically and emotionally” he said.

He is targeting to pursue his studies in a top university in the United Kingdom in hopes that it can boost his ambition of becoming a top scientist.