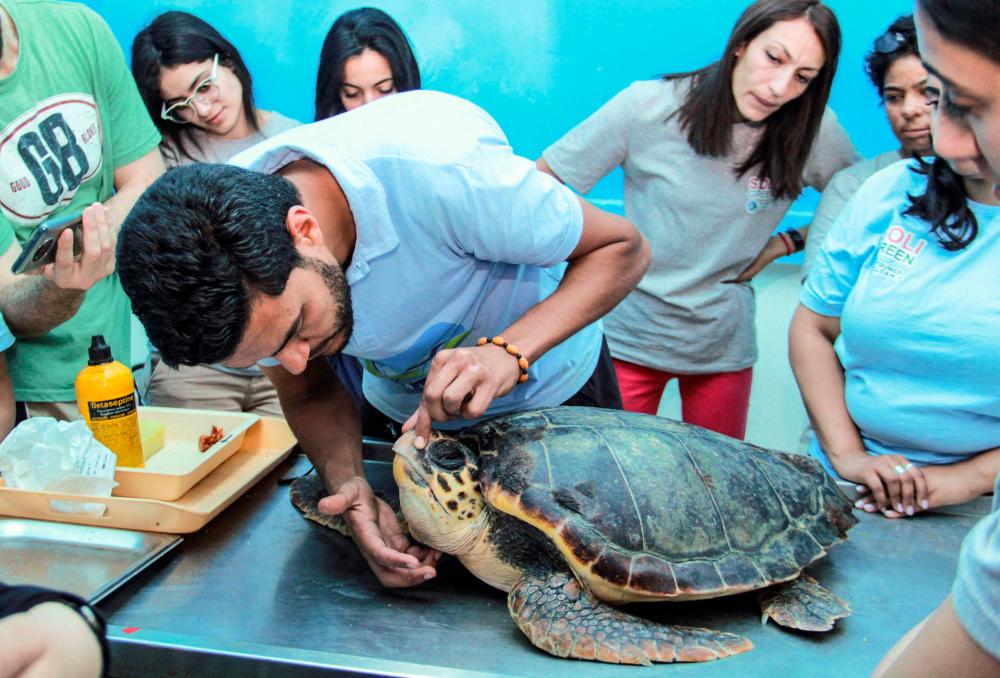 A scientist checks a sea turtle before releasing it into the sea on May 21, 2022, in the Tunisian coastal city of Sfax, about 270km southeast of the capital Tunis/AFPPix

TUNISIA: Three rescued loggerhead turtles were released into the Mediterranean off Tunisia on Sunday, one with a tracking beacon glued to its shell to help researchers better protect the threatened species.

The main risks to sea turtles in Tunisia are linked to fisheries, since they become entangled in nets -- including the three that were released into the wild.

The migratory species, which can live to as old as 45, are listed as “vulnerable” in the Red List of threatened species of the International Union for Conservation of Nature (IUCN).

The turtles’ release was watched by a crowd of some 50 people, many of them children, carried out by a specialised care centre in Tunisia’s eastern port of Sfax.

Some 35 turtles have been cared for at the centre in the past year as part of the Mediterranean-wide Life Med Turtle project.

Environmental activists helped carry the heavy turtles down the beach, before the animals crawled the final distance towards the sea.

All of them were tagged, but one of them also had a phone-sized tracking beacon glued to its hard shell, which will track its progress as it moves across the sea.

“This beacon, given to us by the University of Primorska in Slovenia, will allow us to follow this turtle in its movements,“ said Imed Jribi, a science professor from the University of Sfax and a coordinator of the Life Med Turtle project.

As well as loggerhead turtles, two other turtle species are found in the Mediterranean, the green and leatherback turtle.-AFP