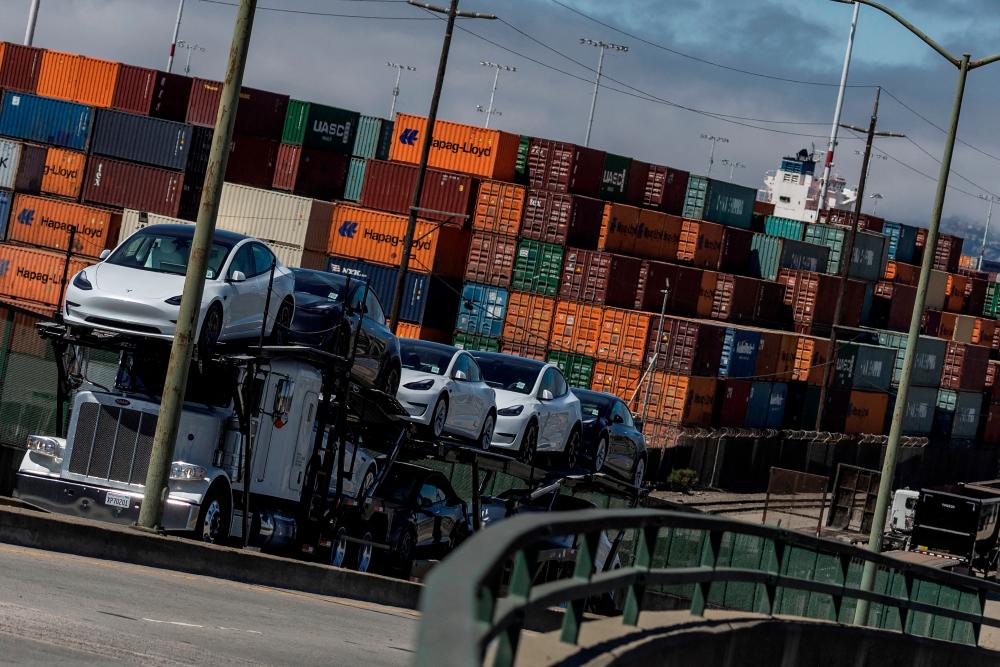 Shipping containers are seen at a terminal inside the Port of Oakland in Oakland, California. The overall decline in exports reflects a strong dollar, driven by tighter monetary policy, and weakening global demand. – Reuterspix

WASHINGTON: The US trade deficit in goods narrowed for a fifth straight month in August amid a decline in imports, which is being driven by slowing domestic demand as the Federal Reserve (Fed) aggressively tightens monetary policy to tame inflation.

The report from the Commerce Department on Wednesday (Sept 28) suggested that trade would again contribute to gross domestic product (GDP) in the third quarter. The economy could also get a boost from big gains in wholesale and retail inventories last month, though consumer and business spending are likely to be tepid.

The data prompted economists to upgrade their GDP growth estimates for this quarter, in one instance by as much 1.7 percentage points, which would snap two straight quarters of decline in output.

“Trade should be a positive for third-quarter GDP,” said Ryan Sweet, a senior economist at Moody’s Analytics in West Chester, Pennsylvania. “Still, the third quarter isn’t shaping up to be overly impressive.”

The goods trade deficit contracted 3.2% to US$87.3 billion (RM403.9 billion) last month, the smallest since October 2021. Imports of goods dropped US$4.6 billion to US$267.1 billion. There was a 6.9% plunge in imports of industrial supplies, which include petroleum.

Imports of capital goods dropped 1.8%, while those of consumer goods slipped 0.2%. There were, however, increases in imports of food, motor vehicles and other goods, which boosted retail inventories.

The US central bank last week raised its policy interest rate by 75 basis points, its third straight increase of that size. It signalled more large increases to come this year. Since March, the Fed has increased its policy rate from near zero to the current range of 3.00% to 3.25%.

Goods exports fell US$1.7 billion to US$179.8 billion in August. The decrease in exports was led by motor vehicles, which tumbled 8.9%. Exports of industrial supplies fell 3.5%. But exports of consumer goods surged 8.0%. There were also increases in exports of food, capital and other goods.

The overall decline in exports reflects a strong dollar, driven by tighter monetary policy, and weakening global demand. The dollar has gained 10.5% against the currencies of the United States' main trade partners this year.

“We do not expect this landscape to change markedly in the near term and we look for the goods trade gap to continue to narrow in the months ahead,” said Matthew Martin, a US economist at Oxford Economics in New York.

Record exports and moderate consumer spending were the only bright spots in the economy in the second quarter, helping to limit the hit to gross domestic product from a sharp deceleration in the pace of inventory accumulation.

The economy contracted at a 0.6% annualised rate last quarter. That followed a 1.6% pace of decline in GDP in the January-March quarter.

S&P Global Market Intelligence boosted its third-quarter GDP growth tracking to a 2.1% rate from a 0.4% pace previously. Economists at Goldman Sachs raised their estimate by 0.2 percentage point to a 1.4% rate. Despite the GDP upgrades, a big drag from housing is anticipated.

Soaring mortgage rates, in response to the tighter monetary policy, are weighing on the housing market. The 30-year fixed mortgage rate averaged 6.29% last week, the highest since October 2008, from 6.02% in the prior week, according to data from mortgage finance agency Freddie Mac.

A separate report from the National Association of Realtors on Wednesday showed signed contracts to buy previously owned homes dropped 2.0% in August. Contracts, which become sales after a month or two, have declined in nine of the last 10 months.

The Commerce Department also reported that wholesale inventories jumped 1.3% in August after rising 0.6% in July. Retail inventories increased 1.4% after advancing 1.1% in July.

Motor vehicle inventories shot up 3.7% after rising 3.5% in the prior month. Retail inventories excluding motor vehicles, the component that goes into the calculation of GDP, increased 0.6% after gaining 0.3% in July.

“The pace of real inventory accumulation is now on track to firm between the second and third quarters, implying that inventories will help support GDP growth in the third quarter,“ said Daniel Silver, an economist at JPMorgan in New York. “We see significant upside risk to our third-quarter GDP tracking.” – Reuters