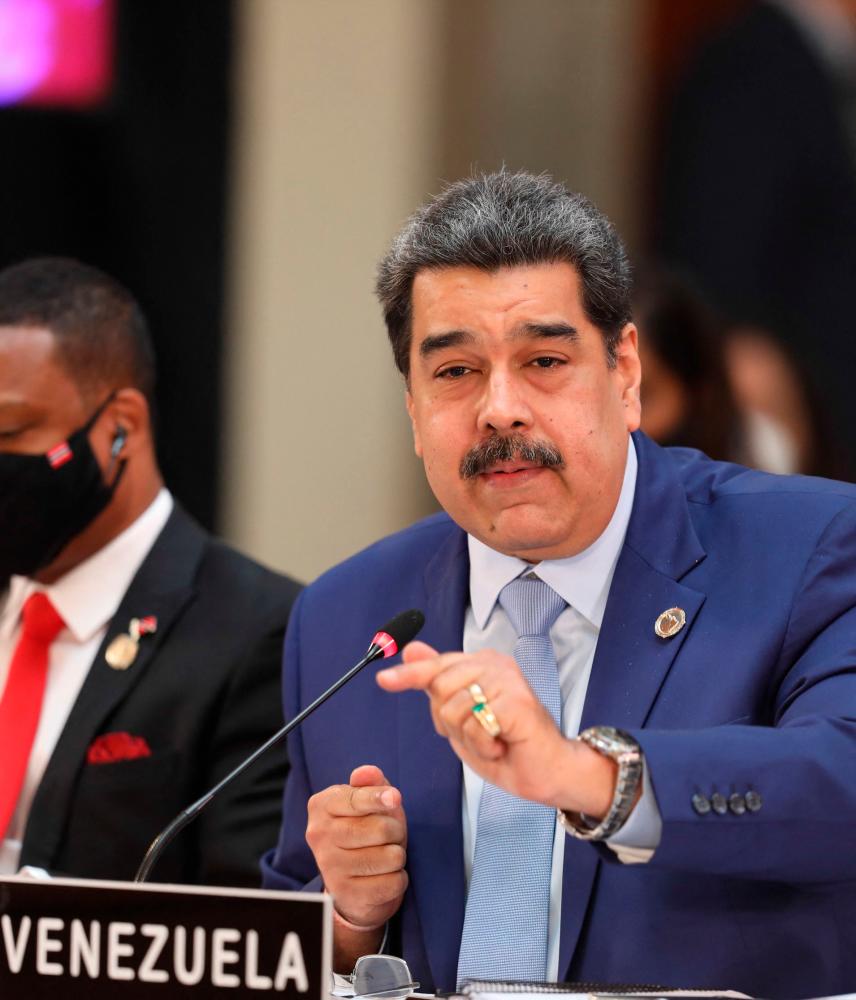 MEXICO CITY: Venezuelan President Nicolas Maduro(pix) hit back Saturday at challenges to his legitimacy as he attended a regional summit in his first trip abroad since the United States accused him of drug trafficking.

Maduro showed up at the last minute at a one-day meeting of the 33-member Community of Latin American and Caribbean States, or CELAC.

In March 2020, the US Department of Justice accused Maduro of crimes including “narco-terrorism,“ drug trafficking and possession of weapons, and offered $15 million for information leading to his arrest.

The Venezuelan president, who usually travels to close ally Cuba or to Caribbean countries, has avoided leaving his country after the reward was issued, and his trip to Mexico is the first of an official nature since then.

More than 50 countries, led by the United States, recognize Guaido as Venezuela's legitimate interim president. Guaido proclaimed himself as such in 2019 after Maduro claimed re-election in a vote widely dismissed as fraudulent.

During Saturday's proceedings, the presidents of Uruguay and Paraguay -- which are among those 50 -- said their presence at the summit did not mean they recognize Maduro as president.

“There is no change in my government’s position and I think it is the gentlemanly thing to say so out loud,“ Mario Abdo Benitez of Paraguay said in a speech to the gathered leaders, with Maduro seated just a few feet from him. Paraguay severed ties with Venezuela after Guaido declared himself president.

President Luis Lacalle of Uruguay said that in Venezuela, “there is no full democracy... Repression is used to quash protests, and the opposition is jailed.”

Maduro, a leftist firebrand and former bus driver handpicked by the late Hugo Chavez, responded by challenging both of those presidents to a debate on democracy in his country and in Latin America in general.

“Name the date, the place and the time,“ Maduro said, addressing the two leaders.

He invited them to come to his country and observe municipal elections on November 21, which the opposition has said it will take part in after boycotting voting for three years.

In the substantive part of the summit, some countries called for more equitable access to Covid-19 vaccines and the creation of a regional fund to help countries deal with natural disasters exacerbated by climate change.

But Cuba was also a flash point: Uruguay's Lacalle said that this country, along with Venezuela and Nicaragua, routinely violated people's human rights. He also read out part of the lyrics of a song that became an anthem at unprecedented street protests in Cuba in July.

Cuban President Miguel Diaz-Canel said Lacalle’s remarks “show his ignorance of reality.” He said the song his counterpart cited is “a lie and a fabrication by some artists who are against the Cuban revolution.”

He added: “It seems President Lacalle has very bad taste in music.”-AFP