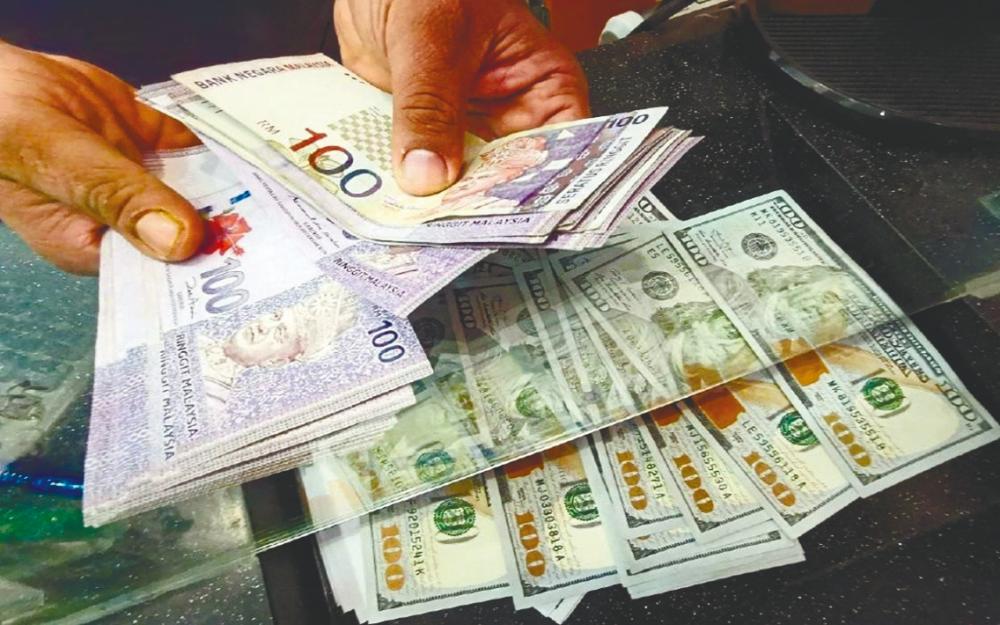 The ringgit is likely to trade around the current level of between 4.40 and 4.41 versus the US dollar this week, – Bernamapix

PETALING JAYA: The main driver for the depreciation of the ringgit against the US dollar is the expectation that interest rates in the US are set to be higher than that in Malaysia, said Bank Islam Malaysia Bhd chief economist Dr Mohd Afzanizam Abdul Rashid.

“The US Federal Reserve is anticipated to increase its interest rate to 3.4% by end of 2022 and to 3.8% by end of 2023. This would mean investment returns in the US would be much higher compared with investments in Malaysia, considering the pace of increase in the Overnight Policy Rate (OPR) is expected to be much less than that of the US rate. We are projecting the OPR could be higher by another 50 basis points throughout the year. So effectively we are probably looking at OPR at 2.50% by end of the year,” he told SunBiz.

A country uses monetary policy to achieve specific economic goals. It intentionally manipulates monetary supply, availability of credit, and cost to borrow money, which could be attempts to stem inflation, promote job creation, or for other reasons. As a result, monetary policy covering interest rates impacts the value of that country’s currency – which becomes stronger or weaker – and other downstream impacts on global exchange rates occur.

Higher interest rates tend to attract foreign investments, increasing the demand for and the value of the country’s currency. Similarly, lower interest rates might be unattractive for foreign investors and decrease the currency’s relative value. Therefore, when the Fed increases its rates, it makes the dollar stronger.

The higher yields attract investment capital from investors abroad seeking higher returns on bonds and interest-rate products as it is directly connected to changes in US interest rates. Accordingly, global rates are set as the yield curve moves up or down.

US Treasury bonds are considered risk-free assets, therefore, other securities must offer higher yields to remain attractive. And with interest rates expected to increase, global investors will put their money in the US, which causes emerging markets to feel pressure to remain attractive as well. It could also hinder employment levels in developing nations, along with exports and exchange rates. Oil, gold, cotton and other global commodities are priced in US dollars, and a strong currency following a rate increase would push up the prices of commodities for non-dollar holders.

Economies that rely primarily on commodity production and an abundance of natural resources will be worse off. As the products of their principal industries decline in value, their available credit streams will shrink.

Meanwhile, the fear of rising interest rates could root in its contractionary effects on credit and the money supply.

Economic theory says higher interest rates lead to a decrease in money supply and appreciation of the currency. At the same time, lending and credit markets contract. As interest rates increase, the cost of credit does, too. From bank loans to mortgages, it becomes more expensive to borrow. Hence, an increase in the cost of capital can hinder consumption, manufacturing, and production.

However, Afzanizam said previously Bank Negara Malaysia (BNM) did not increase the OPR after the US increased its rates, as economic activities have improved after the reopening of the local economy beginning in October.

“The Q1’22 GDP came in higher as a result at 5% and the Q2’22 GDP is also likely to accelerate further. Therefore, BNM needed to realign its monetary policy stand as the OPR at 1.75% (previously) was deemed too low. If too low interest rates are allowed at a time when the economy has normalised, it might lead to other problems.

“Savers may have less incentive to save their money in the banks and might be inclined to search for a higher return on investment. In doing so, they might take excessive risks and this would lead to imbalances in the economy, such as an asset price bubble.

“Asset prices can be in the form of property, stocks or other forms of speculative activities like cryptocurrency, foreign exchange and perhaps even get-rich-quick schemes. In other words, it will do more harm than good if BNM allows the OPR to remain too low for too long at a time when the economy has improved,” he explained.

Last week, the ringgit extended its bearish momentum and weakened to 4.4100 on Friday against the greenback, from 4.4050 on Monday, due to profit-taking activities and the hawkish stance by the Fed to keep raising interest rates. The ringgit is likely to trade around the current level of between 4.40 and 4.41 versus the US dollar this week, with all eyes on BNM’s Monetary Policy Committee meeting to be held on Wednesday. 3.Taliban torn over reforms one year after seizing power