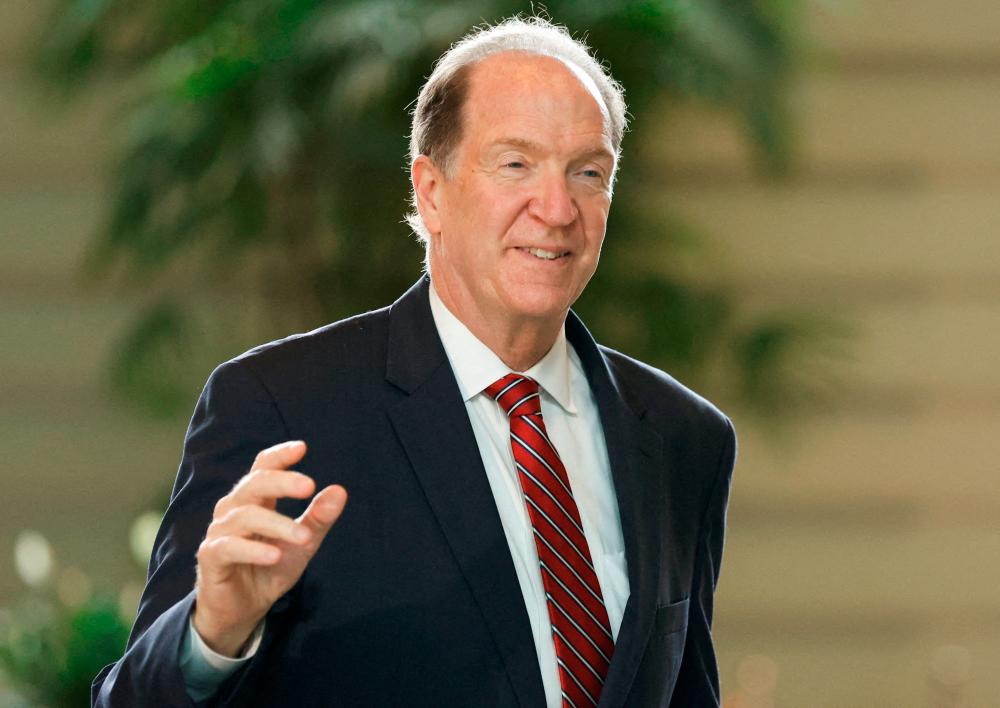 WASHINGTON: Climate groups on Wednesday (Sept 21) called for the World Bank’s president to be removed after he refused multiple times to say if he believed man-made emissions contributed to global warming.

Activists have previously called for David Malpass (pix) to resign or be removed for what they say is an inadequate approach to the climate crisis.

The head of the World Bank is traditionally an American while the other big international lender in Washington, the International Monetary Fund, tends to be European. Malpass is a veteran of Republican administrations in the United States and was appointed in 2019 while Donald Trump, who famously and repeatedly denied the science behind climate change, was president.

The chorus against Malpass grew louder after his appearance on Tuesday at a New York Times conference on climate finance.

Asked by a journalist to respond to former US vice president Al Gore’s claim that he was a climate denier, Malpass said that some of his critics “may not know what the World Bank is doing”. He boasted that its climate funding is “by far the biggest” among international financial institutions.

After another attempt failed to get a straight answer, the journalist, David Gelles, said: “Let me just be as clear as I can: Do you accept the scientific consensus that the man-made burning of fossil fuels is rapidly and dangerously warming the planet?”

Malpass again pointed to the World Bank’s work on the issue, at which point multiple people in the audience shouted: “Answer the question!”

“I don’t even know. I’m not a scientist,” responded a clearly frustrated Malpass.

The Big Shift, a consortium of climate groups, called on Wednesday for the World Bank’s board to remove Malpass over the comments.

“For the World Bank to maintain any shred of decency Malpass cannot remain as president,” said Tasneem Essop, executive director of the Climate Action Network, a Big Shift member group.

A separate group of activist organisations said they would today (Sept 22) unveil a banner at the World Bank’s headquarters in Washington that reads: “The World Bank Group is Run by a Climate Denier.”

Malpass’ term ends in 2024 and he can only be removed by a vote of the World Bank’s board.

Climate groups have called on US President Joe Biden to up the outside pressure.

Biden’s climate change envoy, former US secretary of state John Kerry, declined during an appearance at the same Times event to comment on Malpass’ future, saying “that’s the president’s decision.”

The World Bank and the White House declined to comment.

The US Treasury said it expected all partners to be committed to fighting climate change.

“We expect the World Bank Group to be a global leader of climate ambition and the mobilization of significantly more climate finance for developing countries,” a spokesperson said. “We have – and will continue – to make that expectation clear to World Bank leadership. The World Bank must be a full partner in delivering on this global agenda.”

“How is this possible in 2022? This apathy produces weak climate action when countries so badly need @WorldBank aid & finance,“ Laurence Tubiana, a former French climate envoy and key architect of the 2015 Paris climate accord, said on Twitter.

A coalition of civil society groups on Wednesday called for the World Bank to fire Malpass.

Last year, over 70 non-governmental organisations had jointly called for Malpass to be replaced on the grounds that the Bank was falling short on climate action.

“It is time for the White House and governments all over the world to think hard as to who they want at the helm of the World Bank,“ said Sonia Dunlop from think tank E3G. “You don’t need to be a scientist to understand climate science.”

Other experts said a strong grasp on climate science should be a prerequisite for the job of World Bank president during a time in which climate-driven catastrophes are becoming more frequent and impacting many developing countries that receive financial support from the Bank. – AFP, Reuters