12-year-old fined for possession of cigarettes 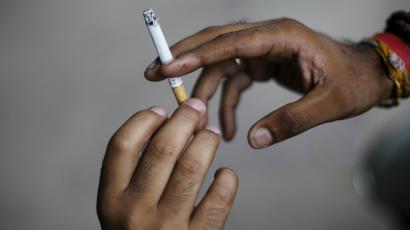 KLUANG: A 12-year-old boy here was fined RM50 for being in possession of a box of cigarettes.

The minor, when caught, tried to get out of the ‘sticky’ situation by telling health enforcement officers that the cigarettes belonged to his father, Kluang District Health Officer Dr Mohd Nizam Subaher said.

Mohd Nizam warned that minors found smoking or in possession of cigarettes could be compounded regardless of whether they were in eateries or not.

He said the action taken was to ensure that minors, especially school children, do not get hooked to smoking and at the same time prevent them from being involved in other bad habits as well.

“Whatever reason given, including if the cigarettes belong to the parent or any other adult, no exemptions will be given if they have violated Rule 13 (1) of the Tobacco Control Regulations 2004,“ he said after an enforcement operation that targetted eateries in the district here today.

Mohd Nizam said besides the 12-year-old boy, 33 other people were also compounded in Kluang since Jan 1 for committing offences under the same regulations.

He said 47 compound notices amounting to RM6,250 were issued, with 25 of them related to smoking offences at food premises.

“Other notices given include the sale of cigarettes below the minimum price and selling cigarettes without a valid licence, for which the total compound amounted to RM11,250.

“We would also like to remind those who have not displayed no-smoking signages at their food premises, that they are committing an offence under Rule 12 (1) (a) 5,“ he added. — Bernama