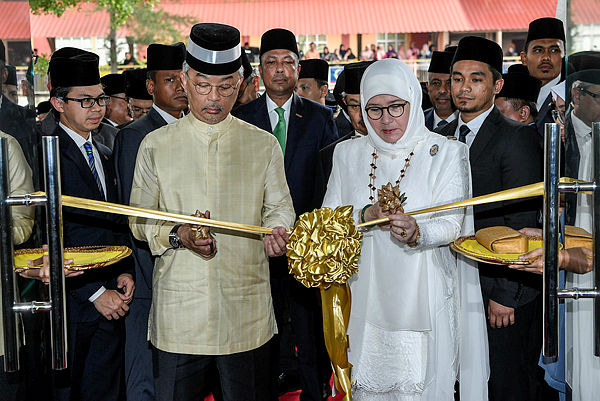 KUALA LUMPUR: Concerned about the plight of the poor who are in need of haemodialysis treatment, the Yang di-Pertuan Agong Al-Sultan Abdullah Ri’ayatuddin Al-Mustafa Billah Shah has set up a haemodialysis centre in Cheras for their benefit.

The centre will be sponsored by the Al-Sultan Abdullah Foundation (Yasa), which is a non-profit organisation set up by Sultan Abdullah, the Raja Permaisuri Agong Tunku Hajah Azizah Aminah Maimunah Iskandariah and their children.

“I felt the need to set up this centre after reading in the newspapers on the many patients in need of the treatment, with nearly 7,000 new cases a year, that the government alone cannot cope with it.

”I also know that many patients have financial problems and are burdened with the high cost of treatment, so I set up this centre to ease their burden,“ said His Majesty when opening the centre today.

His Majesty also hoped to set up similar facility in the rural areas and to focus on the B40 and M40 households.

Sultan Abdullah also hoped that more quarters in the private sector would come forward to provide such facilities for the needy.

“This is the first center under my sponsorship. We plan to open two or three centres a year, and after assessing the area and cost, I hope more quarters will be involved in this effort ... regard it as ‘fardu kifayah’ (good deeds that benefit the ummah) and noble effort,” he added.

Meanwhile, the Yang di-Pertuan Agong expressed the need for more nephrologists in the country to meet the growing needs of patients.

“I have been informed that our country lacks nephrologists where the statistics needed is 20 specialists to one million people.

“However, the current ratio is 5.7 specialists to one million people,” he added.

The Yasa Haemodialysis Centre is wholly owned by Yasa, formerly known as the Abdul Aziz Palace Foundation and is managed by a licensed haemodialysis operator Sinar Hemodialysis Sdn Bhd, which has over 12 years experience.

The centre opens from Monday to Saturday from 8am to 5pm. — Bernama