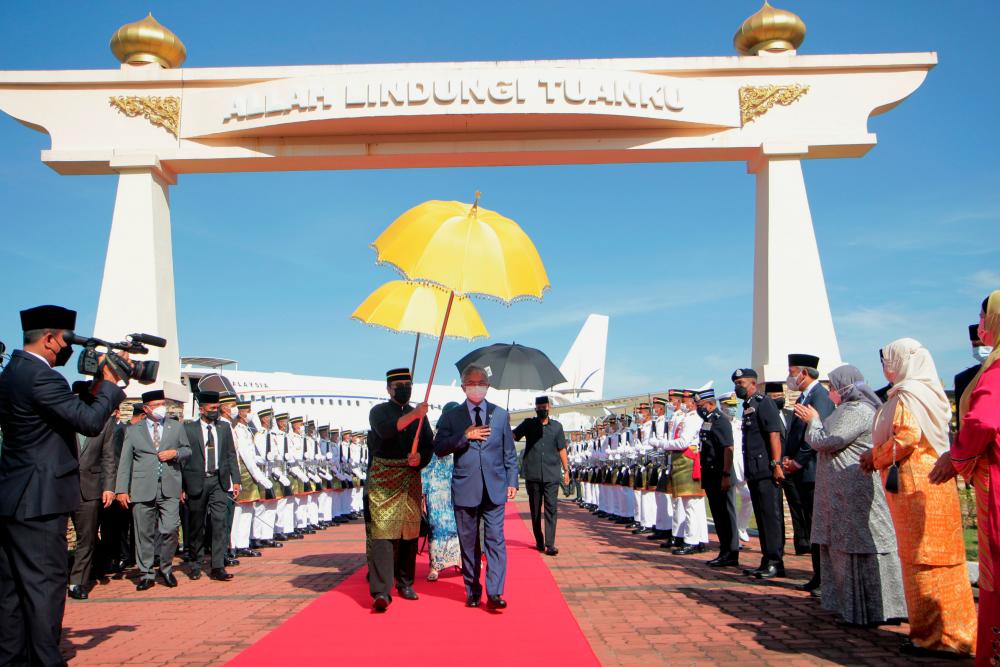 The special plane carrying the royal couple landed at the Royal Malaysian Air Force (RMAF) Base in Kuantan at 3.45pm, and Their Majesties were greeted by their son, Tengku Arif Bendahara Tengku Muhammad Iskandar Ri’ayatuddin Shah.

Upon arrival, the King and Queen underwent a Covid-19 screening test as per the standard operating procedure (SOP) set by the Ministry of Health, before heading to Istana Abdulaziz here, to undergo self-quarantine.

They had also undergone screening tests in London, three days prior to leaving for home.

The King and Queen left for the UK on Sept 17 for a special 10-day visit, the second since Al-Sultan Abdullah was installed as the Yang di-Pertuan Agong, the first being a seven-day visit in December 2019.

In London, Their Majesties visited the Battersea Power Station Project in London, the Malaysian High Commission in Belgrave Square and the Tun Abdul Razak Research Centre in Brickendonbury, Hertford besides meeting the Malaysian diaspora there.

Al-Sultan Abdullah also attended a reunion dinner with his former fellow cadets at the Royal Military Academy Sandhurst, where he studied between 1978 and 1979.

His Majesty also met with two Malaysian cadet officers Muhammad Yaasin Kamaruddin and Muhammad Haikal Mohd Tukiman who are studying there, as well as his coach Mr Colin John.

Apart from that, Al-Sultan Abdullah also granted an audience to the UK’s chief of the defence staff General Sir Nicholas Patrick Carter, who had also studied at the Royal Military Academy Sandhurst.

After the 10-day special visit, Their Majesties stayed back in the UK before returning to Malaysia.