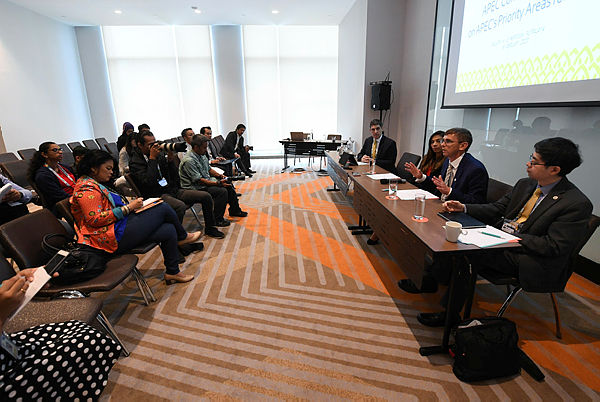 Chair of SOM Steering Committee on Economic and Technical Cooperation Mark Talbot giving an explanation during a Media Briefing by Apec Committee Chairs on Apec’s Priority Areas for 2020 today. — Bernama

PUTRAJAYA: The Asia-Pacific Economic Cooperation (Apec) will have discussions on the Covid-19 outbreak in its upcoming meetings.

Apec Communications and Public Affairs Director Michael Chapnick said Apec recognises the risk of Covid-19, which affects more than 20 countries around the globe.

“We will address it in the meetings in the coming weeks. We will also be working closely with all 21 economies under Apec,” he said in a media briefing by Apec Committee Chair on Apec’s Priority Areas for 2020 here, today.

Chapnick was asked on Apec’s measures to mitigate Covid-19 and the impact on Apec countries.

It has been reported that Covid-19 has infected more than 74,000 people and has claimed the lives of more than 2,000, mostly in China. Singapore reported 81 cases and Malaysia, 22.

Malaysia will host the Apec Economic Leaders’ Meeting in November after having hosted it the first time 22 years ago.

All the 21 leaders and 16,000 delegates of the Apec economies are expected to attend APEC 2020 in Malaysia. - Bernama