Appointments by Prasarana, MAHB not under Transport Ministry’s jurisdiction 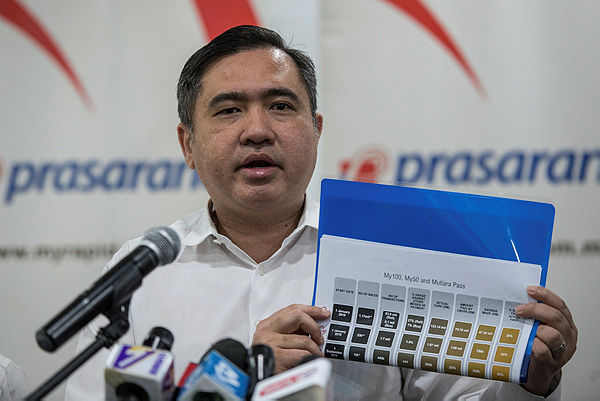 KUALA LUMPUR: The appointments of chief executive officer (CEO) for Prasarana Malaysia Bhd and Malaysia Airports Holdings Bhd (MAHB) do not come under the jurisdiction of the Transport Ministry, says its minister Anthony Loke Siew Fook.

Loke said Prasarana is a company under the Minister of Finance Incorporated (MoF Inc), while MAHB is a partly owned by Khazanah Nasional Bhd and is listed on the main market on Bursa Malaysia.

“The appointment of the Prasarana CEO is not under my purview because it is an MoF Inc company.

“The same goes for MAHB, which is a public-listed company partly owned by Khazanah, so the board will have to make a decision,” he told a media briefing on the updates on Prasarana’s My100 and My50 travel passes.

It was reported on Tuesday that Prasarana president and CEO Mohamed Hazlan Mohamed Hussain, who was appointed to the post on Sept 3, 2018, was suspended from his post by the firm’s board of directors.

Meanwhile, MAHB on Monday announced on Bursa Malaysia that Raja Azmi Raja Nazuddin has decided to leave his post as the group CEO to pursue other opportunities.

For the time being, its board had appointed Datuk Mohd Shukrie Mohd Salleh, the current chief operating officer, as the acting group CEO. — Bernama