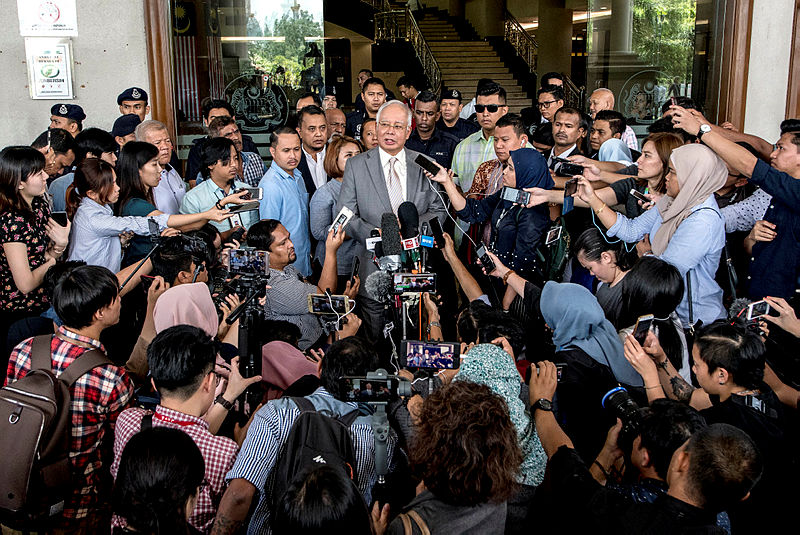 File picture of members of the local and foreign press, during the trial of former prime minister Datuk Seri Najib Abdul Razak. — Bernama

KUALA LUMPUR: After a year of Pakatan Harapan (PH) rule, the media in Malaysia is going through some positive developments as the new government repealed or set aside many of the archaic laws seen stifling press freedom in the country.

Hence, since PH took over Putrajaya, Malaysia has jumped up 22 notches in the latest World Press Freedom Index and ranked 123 out of 180 countries listed.

Though it maybe seen as a small achievement, Paris-based organisation Reporters without Borders (RSF) that compiled the index stated that press freedom received a breath of fresh air in Malaysia after Barisan Nasional (BN) lost the general election in May last year.

It said the journalists and media outlets that were previously blacklisted, such as cartoonist Zunar and the Sarawak Report news portal were now able to resume working without fear of harassment.

The Malaysian media too could sigh in relief as the controversial fake news law has been suspended pending abolition, and the mainstream media no longer have wait for instructions or “Wahyu” from Putrajaya to conform with the political narratives of the day.

Commenting on the media freedom under the PH administration, Dr Syed Agil Alsagoff said the commitment of the new government has opened more space in information freedom for media practitioners.

It was felt when the government agreed to abolish several legislations which curb media freedom such as the Printing Presses and Publications Act, Sedition Act and also to amend Communications and Multimedia Act.

The Universiti Putra Malaysia lecturer said it would also stimulate media development in the country and also reduced legal pressure on media practitioners apart from competing with other media in the world in an environment which reflect information freedom.

He said the move to abolish the Anti-Fake News Act in Parliament should be commended, nonetheless, it was inadequate as the PH government faced the problem of managing the media and weakness in dissemination strategy.

“This frequently caused confusion among the people in getting information relating to the current government’s policies. Cabinet ministers and officers responsible should be more sensitive on the information to be channeled. This included the treatment of media practitioners,” he said.

He believed the setting up of the Malaysia Media Council (MMC) is seen as being capable of transforming the media in the country restricted by the various forms of orthodox laws which denied the functions and roles of the media in the globalised world now.

Meanwhile, on the same note, Suara Rakyat Malaysia (Suaram) executive director Sevan Doraisamy was reported saying in a statement the setting-up of an independent media council is the best way to address issues regarding media freedom in the long term.

“Pending the introduction of a media council, the Ministry should consider establishing a pro-tem committee to review such disputes to ensure that media freedom is not eroded by members of Pakatan Harapan administration who fail to appreciate the importance of media freedom,“ Sevan said.

Commenting on this matter, Communications and Multimedia Minister Gobind Singh Deo said the PH government is committed to press freedom but there were limits as defined by the laws.

“And where one commits an offence, then, of course, the law will take its course. We have seen how the abuse of social media can lead to huge consequences around the world ... not just in Malaysia. Other countries have faced similar challenges.

“Singapore, UK and Australia are calling for more regulations and of course emphasising the need for careful considerations on how much freedom we want to give or we would support when it comes to the media,” he said in a special interview in conjunction with the first anniversary of the PH administration at his office recently.

Gobind pointed out that the ministry is waiting to discuss the establishment of a media council by taking into account all considerations and concerns before making any decision.

MMC wiil be a self-regulatory body that could set high standards for the media community to help build and maintain trust in the industry and act as an arbitration body between the public and the media in the interests of all Malaysians.

The Prime Minister’s Special Advisor on Media and Communications Datuk A. Kadir Jasin was reported saying that the MMC might be set up this year.

“I have been talking to several groups of people to encourage them to do this (MMC) as quickly as possible. There are still many promises yet to be delivered, particularly in the area of reforms while many more legislation that we promised to repeal or amend are still there,” he said.

Kadir pointed out that the establishment of MMC is imperative but the government would not be involved in the process.

Despite all the promises and efforts undertaken to unshackle the media from archaic laws and regulations that stifle press freedom, only time will tell of the real outcome. — Bernama 1.Tedros re-appointed as WHO chief