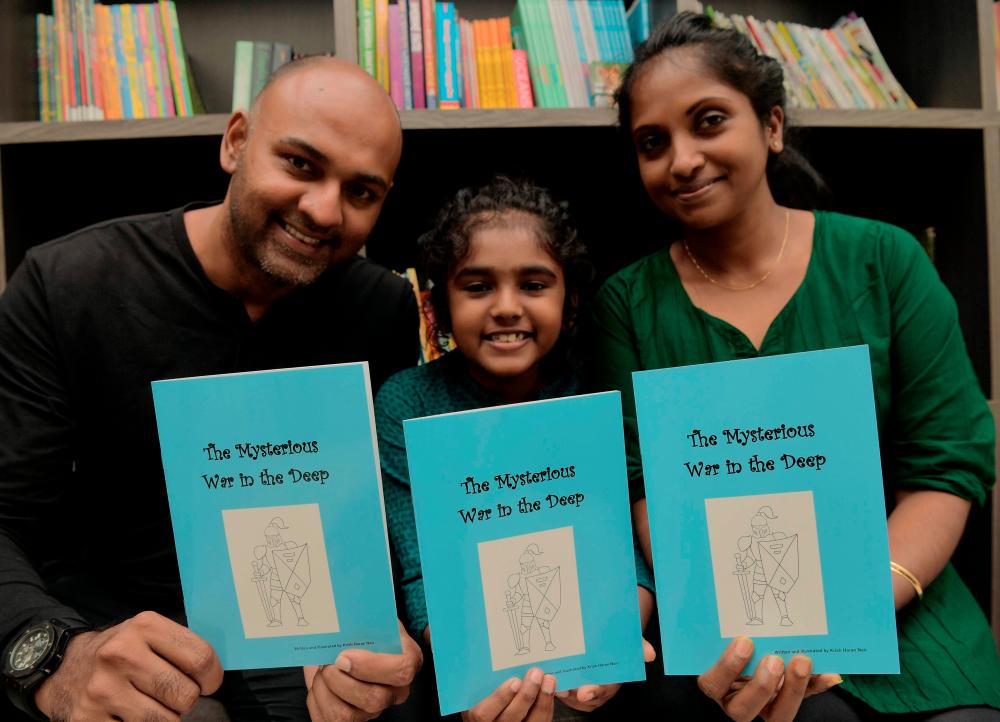 ISKANDAR PUTERI: After a successful sale of his first book that made Krishh Haran Nair (pix, centre) the youngest contributor to the Sultan Ibrahim Johor Foundation recently, he is now determined to help more people, especially children orphaned due to Covid-19, through the sale of his second book.

The eight-year-old is currently working on the sequel of the first book “The Mysterious War to the Deep”, a 12-page book, sales of which recently raised more than RM7,000 and was donated to the foundation.

“I want to write more books, make a sequel for this book titled ‘Pillar and The Golden Sword’. It has mystery and adventure elements. For my next book, I want to help orphanages in need and children who need money, so they can buy food, toys, books.

“The book is about a man name Pillar, he goes into war, gets lost in the forest and his friends also get lost. He has a magical potion for winning the war and becomes a king,“ he told Bernama when met recently at his home, here.

The Sunway International School Sunway Iskandar student also said that he wanted to help in easing the burden of families who would be taking care of these orphans.

The only child of N. Ramakrishnan and R. Jayanthimarlin said he was grateful and thankful for the support for his first short work book especially in getting a bit of limelight from the Sultan of Johor Sultan Ibrahim Almarhum Sultan Iskandar, who was impressed with him.

“I felt very proud, very happy and thankful to the people who bought the book and make the money so that I can give to the Johor Sultan to buy food boxes, so they (the foundation) can give them out (to people in need),“ he said.

Meanwhile, Jayanthimarlin said after Sultan Ibrahim made a post on his official Facebook page on Oct 9, many people contacted her and her husband expressing support and encouragement and wanted to get the e-book authored by Krishh Haran.

“Initially after Krishh Haran came up with the idea that he wanted to sell books to raise donations, we sent a voice message stating that he had written a storybook and wanted to collect donations as well as wanted to help people in need, to family, friends and teachers. The Whatsapp message lasting almost two minutes spread far and wide.

“Krishh Haran’s online teachers also helped spread the word that he was collecting donations, so his friends in Australia, Canada, Spain and Bangkok as well as two Tamil schools in Negeri Sembilan also bought the book in ‘hardcopy’ form,“ she said. .

Members of the public who want to support Krishh Haran’s initiative by purchasing his storybook can send an email to jayanthimarlin@gmail.com for more information.- Bernama