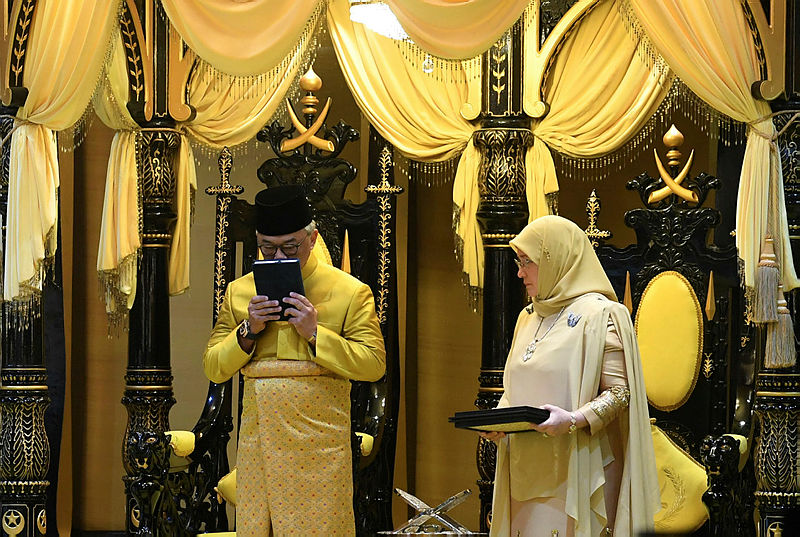 PEKAN: Following is the official biography of the new and sixth Sultan of Pahang, Sultan Abdullah Sultan Ahmad Shah (pix), as released by Istana Abu Bakar.

His Royal Highness Sultan Abdullah was born on July 30, 1959, at Istana Mangga Tunggal in this royal town.

Sultan Abdullah then went to the United Kingdom to further his studies at Aldenham School, Elstree, Hertfordshire, United Kingdom, and Davies College, London, from 1975 to 1977.

He also attended The Royal Military Academy Sandhurst, United Kingdom (1978-1979) as well as Worcester College and Queen Elizabeth College, also in the United Kingdom (1980-1981) and gained a Diploma in International Relations and Diplomacy.

Sultan Abdullah has a deep interest in the military, and this was evident when he was made a Second Lieutenant at the Royal Military Academy Sandhurst, and where he was commissioned by Queen Elizabeth II in 1980.

Appointment as the Pahang Crown Prince

Appointment as the Regent of Pahang

At the age of 20, he was appointed as the Regent of Pahang on April 28, 1979, for a period of five years, during the reign of his father, Sultan Ahmad Shah, as the seventh Yang di-Pertuan Agong.

Again, on Dec 8, 2016, he was appointed as the Regent of Pahang until Jan 11 this year when the Pahang Royal Council decided to proclaim him as the sixth Sultan of Pahang.

Sultan Abdullah was a keen sportsman and, while in England, he led the Pahang Royal Polo team in an international tournament at the Windsor Polo Club.

Later, he participated in tournaments in Singapore, the Philippines, Brunei, Argentina, the United States, Spain and Belgium.

In Pahang, he set up his own football team called Sri Mahkota Alam in Pekan.

He also has an interest in other sports such as golf, go-kart racing and ultralight aviation.

Sultan Abdullah is the president of the Pahang Islamic Religious and Malay Customs Council.

He is also the president of the Pahang Royal Family Welfare Body and the chancellor of three universities, namely Universiti Kuala Lumpur (UniKL), Universiti Malaysia Pahang (UMP) and DRB-HICOM University of Automotive Malaysia.

In the sporting arena, he is a council member of the Asean Football Federation (AFF) and member of the FIFA Executive Committee and was the president of the Football Association of Malaysia (FAM).

Sultan Abdullah’s commitment to sports is not confined to the country but extends to the international arena.