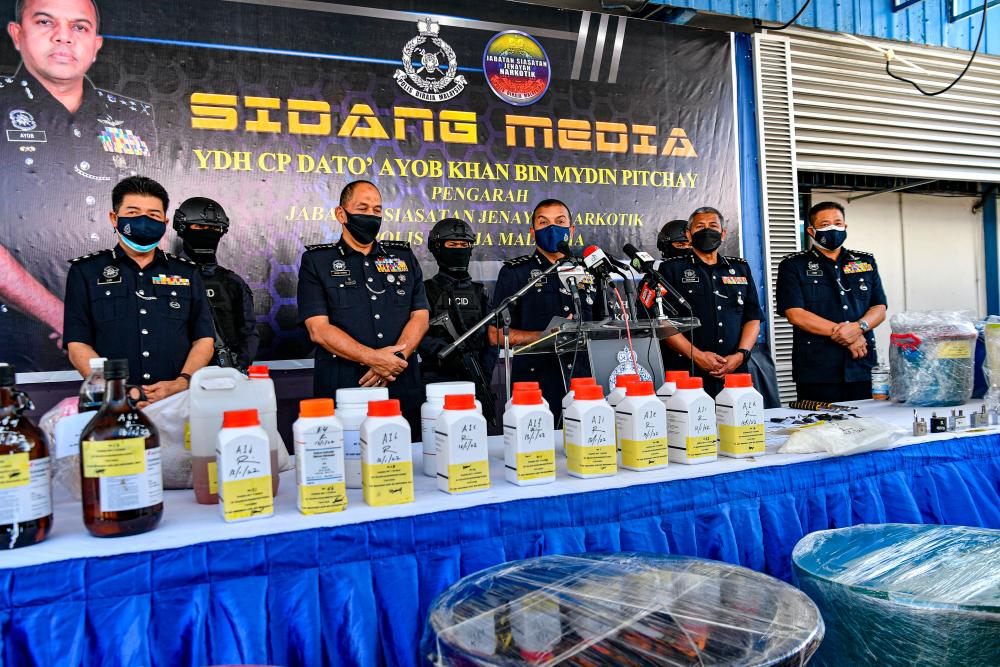 IPOH: The Bukit Aman Narcotics Criminal Investigation Department (NCID) recorded the largest seizure of ketamine this year, estimated at RM111.2 million, in a raid on a factory at an industrial area in Pusing, Batu Gajah last Thursday.

Its director Datuk Ayob Khan Mydin Pitchay said the raid on the premises used as a drug processing laboratory was carried out together with the Perak NCID from 1.30pm on Thursday until 5.45am the next day.

“We managed to arrest three suspects aged between 28 and 40 who are believed to be involved in a syndicate processing and distributing ketamine for the local market,“ he told a press conference here today.

The amount of drugs seized could have supplied 6.7 million drug addicts and initial investigation shows the syndicate has been active since mid-2021.

“The modus operandi is to use a premises in the industrial area as a laboratory to process drugs to obscure it from the authorities,“ Ayob Khan said.

He said various assets of the syndicate worth about RM201,307.50 involving six vehicles, jewellery and cash, were also confiscated.

According to him, the initial screening of the three men found two of them positive for ketamine apart from having criminal and drug records.

All the suspects are now remanded for four days until tomorrow to assist in the investigation under Section 39B of the Dangerous Drugs Act 1952.

“Police are tracking down three other men suspected to be involved in the syndicate, namely, Azrul Safuan Mohd Puaad, 28, Mohamad Qaiyyum Mohamad Azhar, 23, and S. Patmanathan, 44,” he said while appealing to the public for information.

“Preliminary investigations found that they had used the guise of being trained cooks, tenants of premises and syndicate agents,“ he said. — Bernama